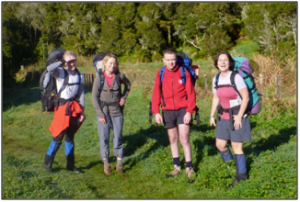 Our weekend starts with Katie pulling out at 5.30pm on Friday due to a pulled muscle. We hear there was a good party on Saturday night too…. Katie was a good sort, acting as a shuttle driver to and from the club van, and passing over her group rations; including a wonderful dessert that even stretched through to morning tea on Sunday.

We had been built up to expect Antartic type weather and muddy conditions. The sun shone down on us as we set out at 10.00 on Saturday from Poads Road heading up to Waiopehu. Four of us climbed steadily together to the ridge. Lunch was devoured, and tales shared about Grizzly bear attacks (and how to avoid them) in Canada.

After lunch the cloud cover came in, the light faded a bit, and the chill was certainly setting in. The afternoon seemed to drag a bit, as we never quite decided on the correct location of ‘bush corner’ When we arrived at the alpine scrub, it was thought by some that we had over an hour of climbing ahead of us. What a relief from the tail to hear the whoops when the head found the hut after only 15 minutes.

Waiopehu Hut has fantastic views of the Horowhenua. What it doesn’t have is any heating. Dinner was had by 6.00. Big ups to Katie for a well planned, tasty meal. After dinner we sat around the table in sleeping bags. Entertainment was thanks to the crossword and horoscopes in the Upper Hutt Leader, which would have been fire lighting material had there been a fireplace. The ‘leader’ was regarded as the highlight of our trip.

Jo is our favourite tramper on Sunday morning when she brews up for everyone else while we are still in our sleeping bags. One of the four missed out due to still being asleep when the call for a brew went out – oh well….

We set out for the well named Richard’s Knob and Gable End in clear weather, with only the gentlest of southerlies to cool the air. There was a satisfying crunch from the ice underfoot. Soon we had the two climbs of the morning behind us, and had reached the turn for Gable End in good time. The lunch stop was taken up here, in the cloud. Soon we got into the big descent down to the Ohau River. Halfway down I take a slip. For the second time in two trips, I manage to fracture a bone, this time in the wrist. Everyone seems a bit quiet after this; we push on steadily line astern with the river on our right. We must of been thinking about the fudge brownie waiting in the van, as the next couple of hours pass fairly rapidly.

We are out as the sun dips behind the hills. All in all a great weekend – a beautiful area, and a beautiful weather break for us. We didn’t break any speed records, but we saw lots, and took plenty of photos. Thanks to Jo, Ashley and Jenna for great company.