This trip had been anticipated for a long time. Turere is a popular Orongorongo hut that needs booking well in 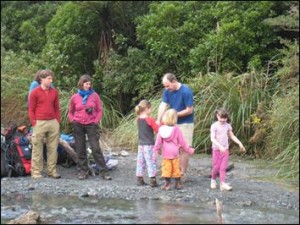 advance. Planning began back in May for this trip. We met on Saturday at Catchpool, where bags of food were distributed for punters to carry in for our substantial dinner. The weather was kind on Saturday, but the forecast for Sunday was rain.

By 11.00 we were all moving. Two keen families elected to take the Cattle Ridge route, where entertainment was provided by a boyish dad and a sheep skull. Great views were to be seen from up the top. On the Five Mile track, we saw a couple of other groups, noticeably a girl guide group that chose to lunch on the other side of Midway bridge from us. 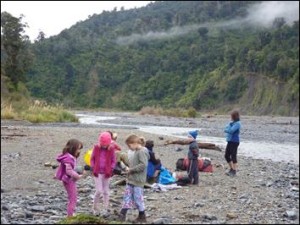 Lots of chatter and a few games passed the walk in to the river quickly. We stopped here for a break, and then got everyone going again for the last short leg to Turere. I’d be fairly sure this was everyone’s first time at this lodge. It looks north up the river, from a large deck. Inside are 4 bunkrooms, and a large kitchen and dining area. The kitchen is equipped with large pots, all the kitchen utensils that you need: cookware, crockery and cutlery. If you like to rough it, then don’t visit Turere.

Our group settled in to the lodge. Kids were heard in excited chatter in their new accommodation. Once things were sorted, and snacks devoured, a group of mostly dads and sons went down to the river. The route is down a steep track. Once on the river we built dams, collected firewood and generally enjoyed the vista. On returning to the lodge, dinner was underway. After lots of chopping 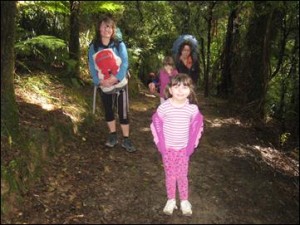 and prep, stirring and adjusting, a bit of a feast was dished up. The fudge brownie was well received.

Following dinner everyone headed down to the river for a ‘My Fire Rules’ competition. We had unwittingly built two fires earlier – whose was to be the best? Incredibly the north site won the day. We are still waiting investigation to the fairness of the event. This fire, and the marshmallows that were toasted over it, were the best memories for many of our younger people.  Kelvin displayed his penchant for bridge building – both in the evening and the next morning.

An enjoyable evening activity was lying outside to watch the night sky.  A game of Ps and As was in full swing at 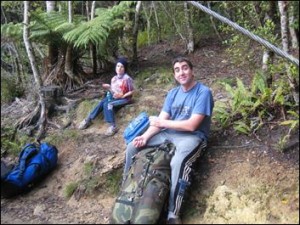 the table – enjoyed by all. Next day, those with the youngest families headed out on the track. Others wandered down to the river, where Kelvin was to be found building bridges. Mike displayed great skill at laying a treasure hunt; he looked a little like the pied piper with all those kids in tow.

From here we headed out via the river, back to the Five Mile track. We seemed to cover the ground on Sunday pretty quickly. Maybe it was the threat of rain late in the day that spurred us on.

Highlights of the trip for the children were;

‘Putting sticks on the fire’

‘Playing with other kids’

‘Sleeping on the deck’

‘A quick swim in the river’

And for the adults;

‘Enjoyed realising that I can do this (tramping)’

‘Pride in the kids’ achievement of walking all the way’

‘Great adventure getting to the fire’

‘Taking the up and over route’

‘Battle of the fires’

I will certainly look at doing this trip again. Watch for the trip on the schedule, as you need to book well in advance to secure the lodge. At the time of writing, the next viable dates available are in February.