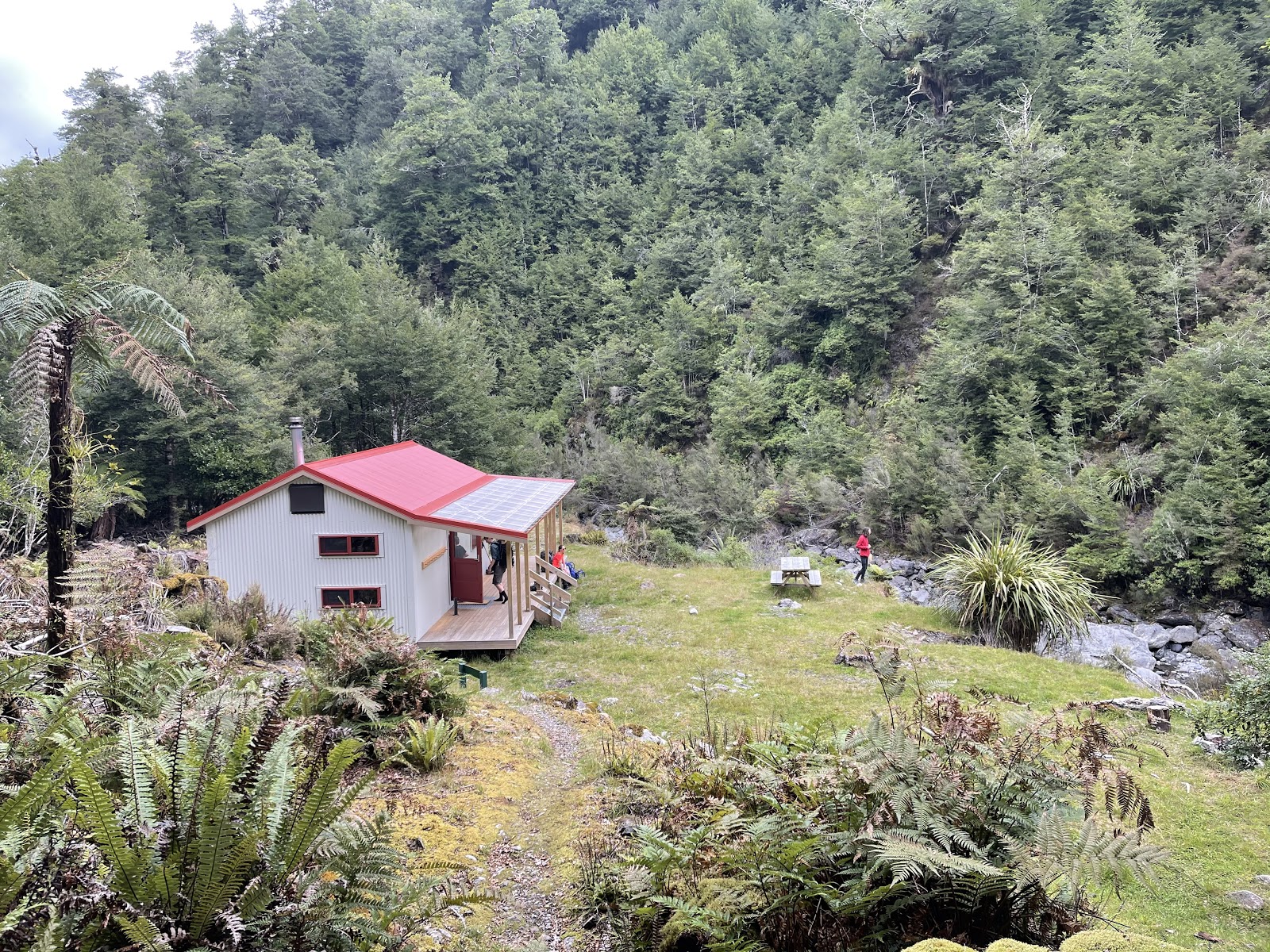 The Ruahine Ranges pulled out all the stops for this tramp, with varied terrain, the opportunity to use the gear for every weather in our packs, breathtaking views, and sounds of the rare Whio and rushing water. Taking the long way round via Tunupō loop we were well rewarded for our 8 hour tramping effort, by the Irongate Hut. She is an awesome hut – new, clean, spacious, well insulated, toasty fire, swimming pool and a waterfall! A big shout out to our first-time trip leader Jamie and co-leader Jane for such an awesome and well-organised weekend!

Work was out for the week and in no time an eager bunch of trampers were off on a weekend adventure! We arrived at our destination, the Petersons road-end car park at around 9.30pm after a quick dinner stop for kebabs at the highly recommended Cafe Anatolia in Levin.

It took 30 minutes along the farm 4-wheel drive track, across a bridge to the sound of rushing water, and through the bush to the lodge.
When we got to Alice Nash Memorial Lodge around 10pm, we discovered other trampers already tucked up in the bunk beds on double mattresses – sound asleep. A good lesson for us all to always assume you are not alone when deciding on the superior comfort option in huts – you never know when night owls like us may arrive and whip your second mattress out from underneath you!

After imagining what was surrounding us in the dark the night before we weren’t disappointed when we woke in the morning!
Starting out at 8:15 we made our way up into the mist, first through the lush bush, then into leatherwood territory, across the tussocky alpine environment on the tops and finally back down into the bush to the hut.

The weather changed as we climbed and became more exposed… the warmth and stillness when we left the lodge gradually changed into a very chilling wind by the time we emerged from the vegetation and into the tussocks on top. Time for all of our layers to be dug out!

We made it to Tunupō at around 11:30am and began to make our way along the ridge through the mist, getting occasional glimpses of the ridgeline when the mist cleared. The route across the ridgeline is not a marked track but it is easy to navigate and clearly cut out through the leatherwood sections. We were also helped in navigating along the ridge by using our phone map apps (ViewRanger) and by following the trapping line – which gave a good guide of the route along the tops!

The traps are baited with eggs and as evidenced by one very dead stoat, they are an effective tool used by the Department of Conservation’s plan to protect our beautiful blue duck – the whio.

Our imaginations ran wild when we stumbled across crater shaped patches of bare earth. Scientific explanations not being as fun, our creative theories included evidence of an ancient asteroid incident, a random boulder from an eruption, an extraterrestrial landing spot…?

We pushed on along the ridge as it was very windy, too cold to stop, and we were not sure what the weather was going to do. We made it to the sign-posted turn-off to Top Gorge Hut around 12:45 and the sign to Irongate Hut at around 1:30. A little further on from that junction, 5 hours into our day’s walk, we ducked off the ridge into a sheltered basin for a (much-needed!) 30-minute lunch break.

Tip: If it’s windy and you find a sheltered spot, and feeling that it will be time for lunch soon grab the opportunity. Our tummies were grumbling by the time we found our spot!

The cloud cover had meant limited views from the ridge in the morning, but as we came along the ridge on the other side it lifted to reveal spectacular views of where we had been earlier and the hills and valleys of the Manawatu.

It wasn’t long before we were back on the track down to the hut … a steep descent but a clearly marked track. We made it to Irongate Hut at around 4:30pm.

We were a bit chilly in the Hut at first and layered up for the night. Then discovered a very well stocked woodshed and lit the fire. With the fire and the luxurious double glazing, we were toasty and down to single layers in no time!
After a long day we all gobbled up our delicious spicy couscous for dinner, followed by a special homemade chocolate mousse treat from Jamie. Yum!

Day 3: Serenaded by the elusive whio on our way out

The next morning we were up by 7:30 and on the track by 8:30. Although the suggested track time was 4-5 hours to the roadend, we sped along and managed to finish in around 4, including a 20-30 minute lunch break at Alice Nash Lodge.
While we sped out it was a very undulating track to the lodge with some rather challenging and steep ups and downs. A real highlight was hearing the call of the whio – we thought we might have seen them – but on closer inspection of our photos they may have been rocks! A memorable weekend, finished off with bacon butties and custard squares at Whispers Cafe in Levin.

Tip: If you want to explore the Iron Gates Gorge before heading home it is a two hour return track, just after Alice Nash Memorial Lodge. We decided not to do it but you could add it on as an extra! https://www.irongates.co.nz/iron-gates-gorge-via-the-stoat-traps-track.html

Tip for anyone planning to go to Top Gorge Hut: Towards the end of our first day, on our descent to Iron Gates hut, we passed another group of trampers who had been in Alice Nash on Friday and were headed to Top Gorge Hut. They did their loop in the opposite direction from us, doing the Iron Gates Track day 1. We thought we’d missed them, but when we eventually met them, they seemed very tired. And they still had a long way to go up to the tops and then the 2-hour walk down to their Hut. We’d recommend doing it the same way around we did and turning off to Top Gorge.