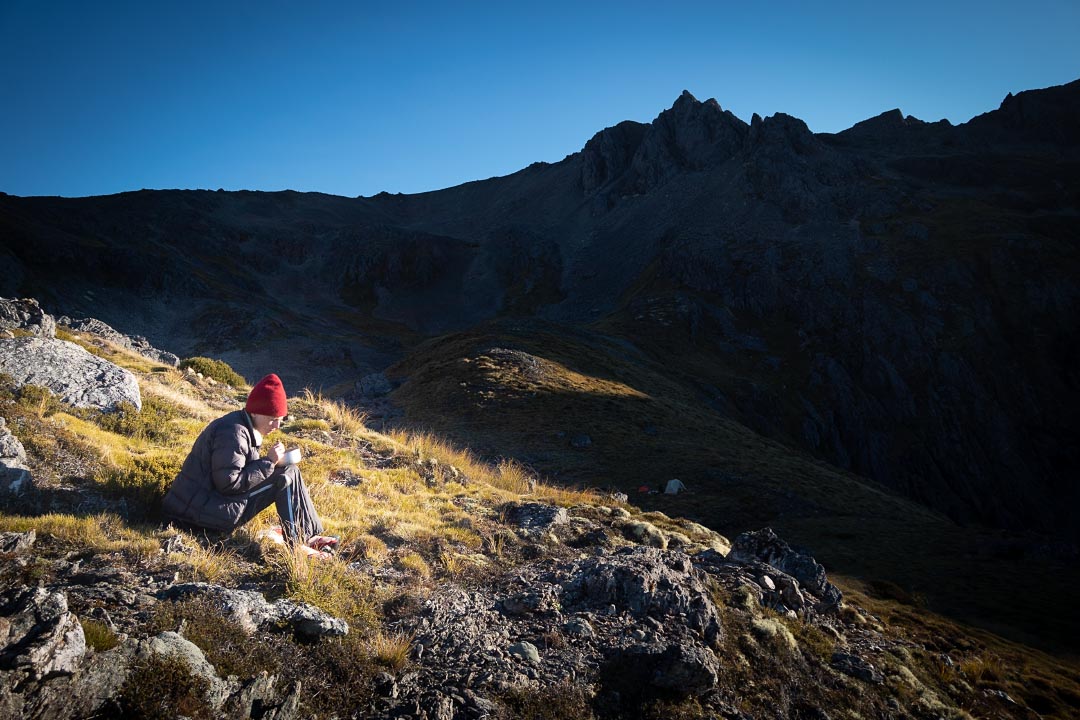 Tony suggested that we head to The Camel, on the St Arnaud Range, a place where as teenagers he and his two brothers went for their first South Island tramping trip. The clincher for me was Tony’s story of a tin under the summit cairn, where people had recorded their climbs from the early 1900s. Although he wasn’t sure if he had added a record of his journey to the tin.

So off we drove up the Rainbow Road, rather than to the originally suggested Mount Owen. We parked at St Ronan’s Well, where there is an unmaintained but permolat-marked track up the valley that accesses the St Arnaud Range.

Once on the range the views were amazing. We could see in the distance Kahurangi, Tapuae o Uenuku, and the Red Hills. Closer to us were the Arnst River and Paraumu Tarn, and Mts Angelus, Hopeless, Cupola and Travers. Tony could point out the names of everything, although this part of the range was a red line for him.  Further along the range we could see our destination—The Camel. But before then we had a couple of tarn camping options, and we picked the closest one. Now we could sit on the ridge in the warm sunshine admiring the extensive views and watch the increasing shadows in the valley below. Then we headed into the shade, down to a beautiful camp site for the night on a small bit of flat ground near a tarn.

Saturday started with a quick ascent back to the ridge (after a ridiculously late start of 10 am), turning south towards The Camel.  The ridge travel was easy and you could decide either to sidle or head directly along the top.

At lunchtime we sat admiring the view again and then dropped packs to stroll up The Camel. When we got to the summit, both of us fossicked in the cairn, wondering if the tin would still be there.  We shifted all the rocks of the cairn and had given up, but Tony shifted a few more for one last look—and there it was!  The rusty old tobacco tin. Tony’s excitement was infectious. But how could we get it open? —it was completely rusted shut.  Tony thought he had a knife in his mostly pack empty. So it was quickly upended, but he could only find a metal spoon.  With some perseverance the tin was prized opened.

[Some time ago, 1967 to be exact, three teenage brothers headed off on their first tramping trip to Nelson Lakes National Park. They drove their battered old soft-top Landrover onto the Aramoana (the first Cook Strait roll-on, roll-off ferry), and then continued to St Arnaud. They tramped around Lake Rotoiti and up the Travers Valley as far as Hopeless Creek where they pitched their A-frame tent on a grassy flat.

The next day they climbed directly up onto the St Arnaud Range and then to the top of The Camel. Why they chose to do this has long been forgotten. But they somehow found the tin in the summit cairn and for some reason they carried a pencil and paper and so were able to leave a record of their ascent in the tin along with other previous records and a shiny 1955 penny.]

Inside was a treasure trove of bits of paper—including the record of Tony’s first tramping trip to the South Island with his brothers in Easter 1967.  This showed that Tony started his tramping career over 54 years ago.

Inside the tin there was also a 1955 penny, and other trip records from the 1960s. There was also a very discoloured piece of paper that unfortunately no longer had any legible writing on it. But what a wonderful sense of nostalgia it all was.

We resealed the tin and returned it to its place, rebuilt the cairn, and then climbed down to collect our packs for the descent to the Hamilton River for the night. The best route down into the Hamilton appeared to be on the true right of the creek flowing from the tarn to start but then crossing to the left. Up high we had a tussock highway (weirdly without any speargrass). Then there was a bit of travel in the beech forest which all went well until it got either gorgy or we ended on the top of a cliff. Consulting the map indicated there was a teeny spur a bit to the east of us, so back up the hill we went for a sidle above a slip. We bashed through the bush across to the spur and it was then an easy trip down through the beech trees to the Hamilton River.

A quick map check here indicated it was only about 7 km back to the car so we looked for the first camp site (which we graded at 8.5/10). Another late start on Sunday morning meant we got to the car at about 11.30 am. We had plenty of time for a look at the impressive St Ronan’s Well, a popular canyoning trip, which appeared very exciting, and then coffee and food at St Arnaud and finally back to Picton and the ferry.
Tony has clearly been tramping for much longer than me but I have been on a huge number of fantastic trips with him. The great thing is we have a trip to-do list that just keeps on growing, and now that I now have regular three-day weekends it will give us the opportunity to explore more. Watch this space.😎