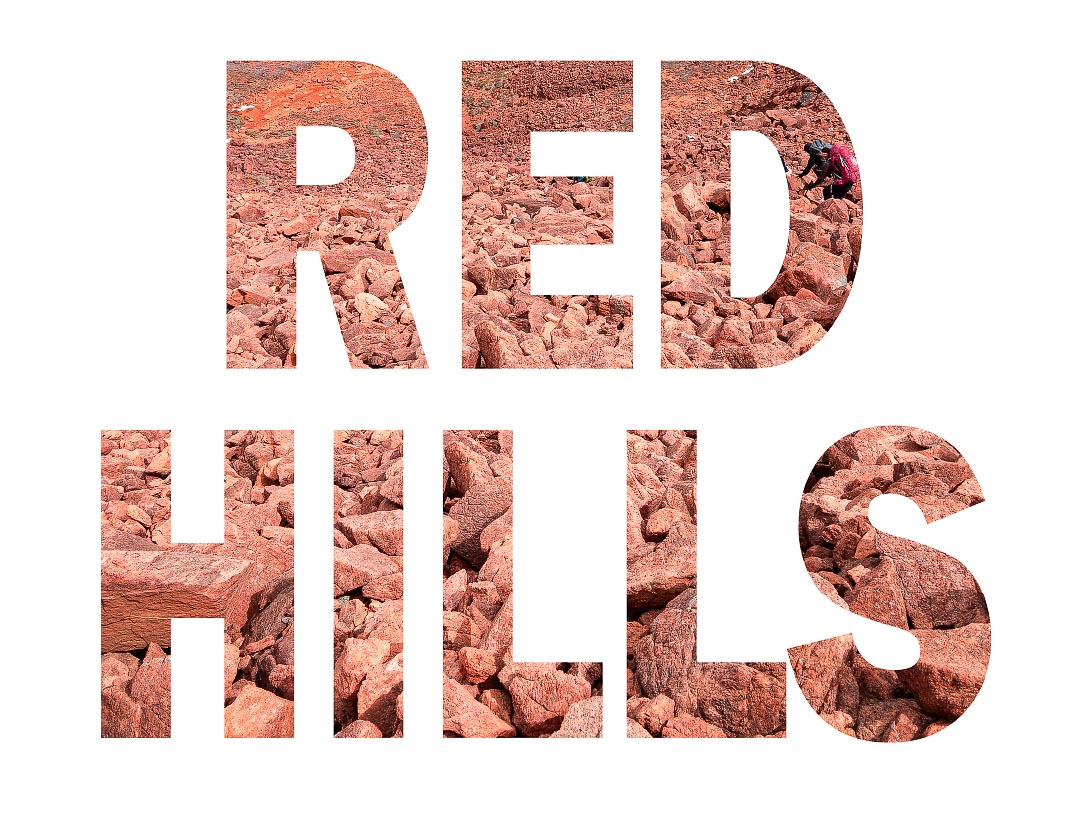 It had been two years since my first experience of the Richmond Ranges, my first overnight WTMC trip, a medium grade where I bit off more than I could chew. So, when I joined the Wellington Anniversary weekend trip to the Red Hills I was a bit nervous but knew I had the chance to get my own back.

The main attraction of heading to the Red Hills area is the ‘ultramafic’ geology. This means there is an abundance of minerals, including iron, magnesium, copper and chrome, which gives the rocks brilliant colours, particularly reds and oranges (thus the name Red Hills). However, the geology also means the soils are too toxic for tree growth, causing much of the area to be covered in only scrub and tussock—plus the mineral composition can mess with compasses.

Leaving from the train station on Friday afternoon, we caught the earlier 4:30 pm Interislander sailing and got to the Kōwhai campsite with plenty of daylight to set up the tents (a real novelty for Tony!) The sandflies behaved themselves and we all tried to get some sleep before the early start the next morning.

We were up and out of camp by 7:30 am and drove the short distance to the start of the track at Six Mile Creek carpark. The start of the track began by winding up through shaded forest along a shared- use mountain bike track. Before long we arrived at a field with farm buildings and beehives where it transformed into a 4 wheel drive track. The track was well-graded but involved a steep 400 m climb, so I was very glad for the cool overcast day.

After a short snack break at Red Hills Hut, we joined Te Araroa trail. The terrain started off a little boggy and muddy but improved as it descended to the Motueka River. The track followed the river climbing up and down, in and out of side streams. We decided we were too hungry to make the planned stop at Porters Hut for lunch, so instead ate at the junction of Lowther Creek and Porters Creek, before arriving at Porter’s Hut around 2:30 pm.

The track made a number of climbs up sandy slopes and down scree with a couple of shady forest sections in between. We met a number of dishevelled TA walkers coming the other way, some of whom looked very speedy, others looking like they could crumple at the next step.

Rain started coming in just as we arrived at our destination for the night, Hunters Hut. Two TA walkers had already made themselves at home and had the fire roaring, making it nice and toasty. Luckily Hunters had 8 bunks so, although it was a bit of a squeeze, each of us had a dry bed for the night. We gobbled our dehy dinners (Tony had suggested we forgo the tastier but heavier group meals for this tramp given we would be carrying extra water and doing a lot of climbing) and Matt even surprised us all by breaking out his secret stash of chocolate.

It was another early start the next morning and left one TA walker snoozing in his bunk, when we set out at 7:30 am. Our original plan had been to head up the spur behind the hut but Tony and Matt decided that it looked quite scrubby and would be very slow going. So instead we walked a bit further along the TA from the hut and made our way up one of the streams coming down the hillside (at 013951). We planned to follow the left branch of this stream for as long as we could and jump up on to the spur once it became less scrubby.

However, once we got going, the stream proved to be a good route, albeit with a lot of rock hopping and wet feet. We decided instead to keep following the main stream to its end point up at the tops at around 1600 m. The baby goats trotting up the hillsides away from us made it look far too easy! The water from the stream dried up before we got to the tops so we made sure to refill our water bottles as there would be no reliable water source for the next few hours.

As we followed the ridge north, the wind picked up, making it difficult to place your feet on the sandpapery red rocks below. I’d go to take a step onto the next rock and a gust would steal my foot out from under me. After a few gusts where some of us were having to crouch down or grab onto something to stop ourselves blowing away, Matt decided it was best to sidle along the sheltered side of the ridge where we could. The relief was immediate and we began having to strip off layers and whip out the sunglasses (but still leaving on the gloves to avoid cutting up our hands on the scratchy rocks).

We came across a lovely sheltered spot for lunch, on a grassy patch below point 1710, before our final ascent to Red Hill. Some in the group were so comfortable in the sunshine that they even got in a power nap!

We soon realised that it was going to take a long time to travel across the ridge to our potential campsite near the tarn at point 1749 and there was no guarantees that it would be suitable or sheltered when we got there. Matt and Tony decided that it we should drop our packs for a quick trip up to Red Hill and then descend to the valley floor, where we would have guaranteed water and more shelter. This also enabled us to avoid a couple of gnarly peaks along the ridge after Red Hill.

We raced up to the peak in the gusts, only to discover that we had, in fact, accidentally scaled the fake Red Hill which was just before the real Red Hill and about 10 m lower. Alas, there was not time for the 20 metre climb down and up to the summit. So instead we began the long descent down into the sweeping U-shaped glacial valley of the Motueka River Right Branch. We arrived at an extraordinary bright orange sandy beach in the gully below Red Hill, before following a stream down to the valley floor where we headed south along the Motueka.

After a while, Tony pointed out that he’d only seen two suitable campsites and suggested that if we found a good spot we should stop there. No sooner had he said that than we came across a raised sandy patch on the true right of the river near 892034. We pitched our tents and wasted no time in getting fed and settled in for the night. It was peaceful spot and gave us a spectacular view of the star-speckled night sky above.

We had all reluctantly agreed that, to ensure a timely return to the van, we would need to be walking by 5:30 am the next day. I arose at 4:30 am bleary eyed from a sleepless night, the tent wall having flapped against my back all night. I scrambled around in the chilly morning air, shoving gear haphazardly into my pack, not caring about the orange sand that stuck to it.

We followed the river south in the dark until the stream directly below point 1666. The golden sunlight chased us as we sidled up to the ridge, popping up just below Chrome. As the wind had dropped since the day before and with less rock hopping, we made good time travelling along the ridge.

We continued on, making it to a section called ‘The Plateau’. This proved to be rather swampy with a scattering of tarns all over. Matt led us higher up to avoid the tarns and bogginess as much as possible. There were numerous species of interesting moss and alpine plants and I wished I knew more about botany to identify them.

As we came to the edge of the plateau, it didn’t take long to see the hut in the distance. However, while we were desperate to get there, it took a bit of navigating to find the marked track leading down through the dense mānuka. With Matt’s GPS we eventually discovered it following the natural ridge above the hut, hidden by the scrub. It was a relief to arrive at the hut and Tony put on a brew while we relaxed in the sun, chatting to two Canadian TA walkers there.

The Richmond Range never fails to deliver on adventure and what a way to vanquish my first-tramp demons than a long weekend epic through some fascinating terrain with amazing people, even despite the trail of carnage in its wake…

Items lost, damaged, or destroyed on the tramp: