The club newsletter for July listed a five day trip to the Richmond Range and commented that the leader Jenny was planning an epic. This sounded like a trip one should definitely sign up for—especially when there had recently been a very heavy snowfall throughout much of the South Island, and more snow and gale force winds were forecast. So I paid my money for a flight to Picton, my share of a shuttle to the start of the Red Hills track, and a flight home from Nelson.

The forecast strong winds were already evident when the pilot announced at Welly that it was too dangerous to land at Koromiko airport and so we would have to divert to Blenheim—hey great, already things were going wrong. Peter the shuttle driver then added to the drama by telling us there had been one of the heaviest snowfalls in Nelson Lakes for many years and most tramping parties were being turned back. So when we started up the easy track to the Red Hills we were unsure what we were really in for—but surely it couldn’t be all bad.

We arrived at the new Red Hills Hut in time for a late lunch then set off for Porters—the next hut along Te Araroa walkway. There was quite a deep snow cover over the track but for the most part we stayed on the top without having to plug too many steps. There were just a few wispy clouds in the sky and there was no wind—certainly no epics so far. 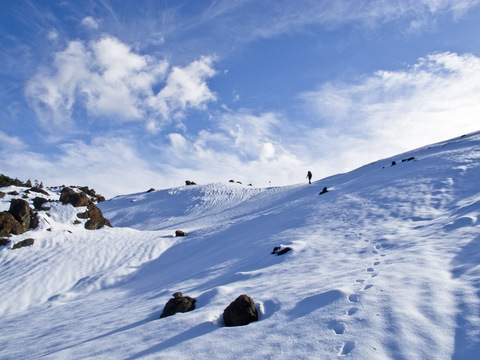 The easy travel continued through some charming countryside—beech forest to the west of the fault line that cuts the length of the Red Hills, and tussock and low scrub to the east where a mineral imbalance in the ultramafic rock prevents the usual beech from growing, and many of the plants in this area are endemic to the Red Hills. Daylight was fading fast as we reached Porters Creek and we remembered Peter’s warning that the final climb out of Lowther Creek to the hut was not well marked and could be easily missed even in daylight.

In the beam of our torches we had picked out a few small cairns in the riverbed but eventually we had to admit that we may have gone too far upstream and so we backtracked a few hundred metres to the base of a wide scree slope. We could find no markers here but it seemed to be the spot where the map showed the track started so up we climbed.  Then another small cairn appeared out of the darkness and eventually an orange marker. We followed along the top edge of the scree for half an hour or so and then into the scrub where the track disappeared again. We were now in a very featureless flat area of low bushes that looked the same wherever we shone our torches and although we knew we were close to the hut we were not quite sure in which direction it lay. We pondered over the map for a few minutes and then headed off in the most likely direction only to have the hut immediately appear straight in front of us. We soon had the wood burner warming the hut and tea cooking on our stove. It had been a nice pleasant day in the hills—certainly with none of the advertised epics.

The following day we left just on dawn with the idea of getting to the next hut early enough to have the option of pushing on over Mt Ellis to the Wairoa Valley. However, we were in no hurry—the day was calm and clear again and by the time we arrived at Hunters Hut it was too late to sensibly go further so we moved in. We collected a heap of firewood for the burner and spent the remainder of the afternoon lazing about, taking in the view, and planning for what was likely to be a long next day.

We had only one book between us so after tea as the increasing wind roared around the hut and a few snow flurries passed by the windows I lay back on top of my sleeping bag in the toasty warm hut while the trip leader read a bedtime story for a couple of hours. Certainly not what I had in mind when joining the trip but nonetheless very pleasant.

Next morning we left before dawn again and headed down to the Left Branch of the Motueka River which we followed to a broad spur leading up to Mt Ellis. The first couple of hundred metres climb up the spur was easy enough but the higher we climbed the deeper the snow became and the further we fell through it to the buried scrub and grass below. Progress became pathetically slow. Every few steps involved sinking waist deep or more and then an exhausting struggle to get out—only to take another step and fall through again. At one point Jenny fell through into the branches of the beech trees below and could hardly struggle out of the tangle. I did much the same and when my foot got caught between some branches I had to take my pack off before getting back to the surface.

It was hours of solid effort before we left the bush behind. But once out in the open we were faced with the strong easterly wind that had been forecast, and spindrift and falling snow combined with the mist to form a total whiteout. We could see virtually nothing around us but at least the snow surface was now wind compacted and we could at last walk without falling through. We could occasionally pick out one of the few widely spaced snow poles marking the sidle below Mt Ellis and we moved as fast as we could to keep warm. But then the snow surface changed to hard polished ice and with the drifting snow swirling about us we put on the crampons that we had thought would probably be just unused deadweight in our packs. Now we could move safely across the steepening sidle, stopping only occasionally to check the map and our compass bearing where there were no marker poles.

We eventually arrived at the wide saddle directly above the Wairoa Valley and spent some time arguing where exactly the route was down to the hut.  Without fully agreeing we headed down the easiest looking place. At first the going was fun—plugging long steps in a firm snow slope that took us down very quickly. Then we spotted the first track marker off to one side and headed its way. Now almost without warning the snow changed to deep rotten porridge that we fell through almost every step. Again progress was agonisingly slow—Jenny fell face down through to the rocks below the snow and had to be hauled out. Then I went through backwards and it was her turn to help me out. 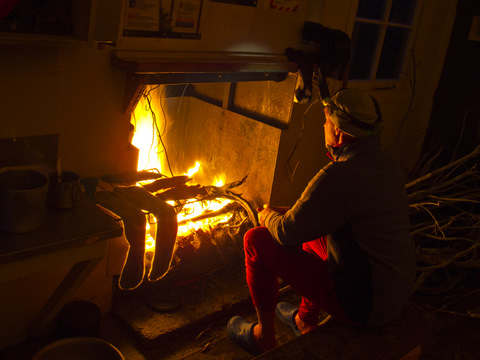 Although it was only about 1 km and all downhill to the hut it took us nearly 2 hours to get there. By the time we opened the door we had both had more than enough of hauling ourselves out of the deep holes we were constantly falling into—the DOC time for our day was 4 hours but it had taken us nearly 9 hours of non-stop toil. Just as it was getting dark we collected a pile of wood and while Jenny cooked tea I started a blaze in the open fire place.

Soon the hut was toasty warm and we could sit back and enjoy our drinks and meal while our wet clothes steamed dry. While it had been a frustrating and tiring day, even mildly unpleasant at times, it had been by no stretch an epic especially since after tea I again stretched out on my bunk in the roasting heat to listen to another couple of hours of bedtime story.

We were now a half day behind schedule and neither of us could afford to be late back to Welly so with the prospect of a very slow trip over the high peak of Mt Rintoul in the soft snow conditions we changed our plans and instead decided to head for the road end in the Wairoa Valley. But before that we had time to get to Tarn Hut for the last night of the trip.

Once again we left just before daylight and headed down the gorge to Mid Wairoa Hut. The track climbed and dropped all over the place and crossed the river many times but it was interesting travel and the day was fine and calm again. We arrived at the hut for lunch then climbed the 700 m to Tarn Hut. I had been to this enchanting place a couple of times before on warm summer days but now the tarn was frozen and there was snow covering the beaches and surrounding trees—it appeared totally different to my memory and seemed to me somehow both incredibly beautiful and dreary cold at the same time.

Again we cranked up the pot-belly in the hut and sat in the warmth drinking tea and eating our tasty meal, while outside it was crispy cold with gently falling snow. After tea there were a few more chapters of bedtime story before drifting off to sleep. Undoubtedly it had been another lovely day in the hills but it had been yet one more day without any of the claimed epics.

There now only remained the race back down the track to Mid Wairoa and then out to the road end where we waited for the mountain bikers building their tracks for a future park and to cadge a lift to Nelson when they finished work for the day. I flew home while Jenny stayed an extra day to visit friends.

It had been a wonderful five days in one of the most beautiful tramping areas in the upper South Island. But it had clearly not been the trip I had signed up for—where were the promised epics? Instead of epics there was mostly fine calm weather, wonderful views, generally easy tramping, roasty warm huts, nice meals, and bedtime stories every night. I felt cheated! I am now thinking of asking the club for a trip fee refund under the Consumers Guarantee Act.

PS. The nightly bedtime story was the autobiography of Ranulph Fiennes. Now there’s a bloke who knows an epic when he sees one.