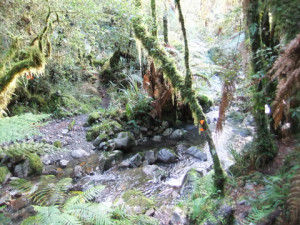 I was disappointed that we weren’t camping out on the Friday night.  It is one of the few chances that I get to see the stars without the light pollution from the city.  As it was, I had to set the alarm for 5.45am on the Saturday morning.  Times before 6am are anathema to me and I was almost sleepwalking through my porridge.   I’m sure I was a sight; tramping pack, boots, pole, and helmet, whilst perched on my bicycle to rendezvous with Megan.  I’m glad it was dark.

The two of us roared in from Upper Hutt to Wellington, collected the van and met our fellow punters.  I was delighted to catch up with Clinton and Spencer who I hadn’t seen for some years.  We all arrived at Otaki Forks uneventfully, but then made the mistake of stepping out of the van.  We could all hear it… the sound of air escaping from the back tyre.  Given it was a side-wall puncture, the whole tyre would have to be replaced, but for now, our immediate problem was getting the spare wheel off. 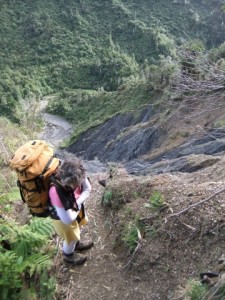 Eventually, the Blokes – 3 Dads and 4 young boys – arrived at the car park also heading to Waitewaewae for a Blokes’s weekend.  After much discussion and more looking at the book, we (they) finally worked out that what looked like a bolt keeping the rear bumper attached to the van, was in fact, a security bolt hiding the release for the spare tyre.   The Blokes left, and after more looking at the book and grovelling in the gravel we found where to place the jack.  Megan took to the nuts with gusto, the lads did some more grovelling and before long we were finally on our way. 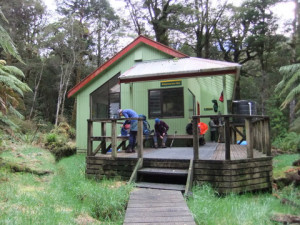 It was mid-winter, and we were blessed with the most beautiful weather.  The sun was shining, but not too hot.  We traipsed along chatting about whether we really had to report such a small puncture.  Would anyone actually notice if we just put the tyre in the back as if nothing had happened..?

Rachel and Deb were both on their first trip, and the Tararua ranges really put their best foot forward for them.  We rounded a corner and met a man with a rifle and a fearsome Pekingese, (well, it was big for its breed), which chirruped at us in its bravest bark.  I immediately realised that such a yap-dog could not possibly belong to the hunter.  I resolved to keep an eye on the papers to see if a woman (and her dog) had been taken into the bush, and shot.  However, on being asked if he came with his wife, he denied it… Hmmm.

A minute later, we crossed an incredibly beautiful river, so very still and clear, clean (and yes! Green too).  Shortly after that we witnessed the power of Mother Nature in the form of a fairly large slip.  We traipsed onwards.  The great thing about this pathway is that there were tracks put in at one time for machinery, meaning that apart from the occasional diversion, the slope is very comfortable.  But then, we came across one of the largest diversions I’ve ever seen.  This slip was gigantic, and marked as active.  It was HUGE.  It looked as if a whole hillside had already completely disappeared.

Not much farther on, there was a rusting abandoned log-hauler.  A good place to stop for lunch before starting the next (watery) leg.  (This is a pun on the name Waitewaewae.)  Somewhere in the vicinity, we heard and saw some whiteheads. We were now following a stream up, criss-crossing every few minutes.  Unfortunately, I made the mistake of stepping on a stone that was a little slippery, and paid the price, falling over with Spencer grading it as 2 out of 10.  To my credit, he upgraded the score to an 8 when he saw the size and colour of the bruise.  Clinton, however, outdid everyone on the trip.  Trying to keep his balance, he danced downstream for 15 feet or so, before falling over face down.  And stayed there.  With his heavy pack, despite all wriggling of his arms and legs, the poor man was stuck and simply gave the impression of a helpless turtle every time he waved his limbs.  Spencer gave him 9 out of 10 for style. 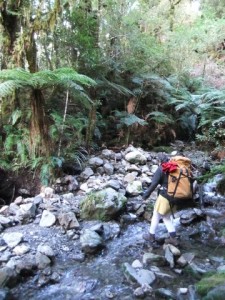 More criss-crossings, and even more, and finally we came to the head of the spring.  Up and over a small hillock and we were on the plateau.  By implication, (and reality) the area was flattish and with nowhere for the water to drain, it was very muddy.  The tuis whistled while we walked and when the mud finished, we started heading down-hill.  Before long, I caught a whiff of smoke and knew that we could be no more than 5 mins from the hut.  Heading down hill, we were detoured by some recently fallen trees.  It was getting late in the day, and had just reached the creek at the bottom of the valley.  With two ways to choose, we opted for dry land.  This involved not only going uphill to detour around a bluff marked on the map, but a higher detour around more deceased trees.  As we walked under a mahoe, a ruru flew in, landing not 6 feet from us and watched as we filed underneath its branch.  In all, it was 1.5 hours after smelling smoke that we finally arrived at the hut.  (The longest 5 mins ever).

Our meal was an extremely healthy vegetarian meal including couscous and (expensive) capsicum.  The Blokes had brought in steak and sausages.  There might have been hash-browns, but even that could have been too much vegetable for their palates.  Envious, much!

At one point, on needing to visit the ladies’ room, I exited the hut to find that an apprentice Bloke was peeing off the steps.  He made a point of keeping his back to me, but then the previous occupant of said ladies’ room came around the corner.  Women everywhere, and nowhere to turn…  I took care where I stepped.

Breakfast whilst tramping has become a cerebral exercise for me.  I try to go with lightweight, slow release energy, filling, easy to prepare, and hot.  For me, this means a bowl of porridge.  However, none of us could believe Deb’s blueberries on her muesli, and felt a pang of jealousy.

It was time to leave our patch of paradise with its amazing summer swimming holes, and interesting hut-book entries.  (Someone is apparently searching for Gollum, and the 1080 debate also started.)  We retraced our steps to the log-hauler for a brief rest while Spencer tried comparing the defunct machine with a dog.

Upon arrival at the van, we were pleased to see that the tyre was still inflated and we drove home without incident.  Having put on my slippers, I didn’t want to put on my wet, muddy boots for the cycle home.  Given the bogan reputation that Upper Hutt has, I decided I could get away with it.  I’m still glad it was dark.