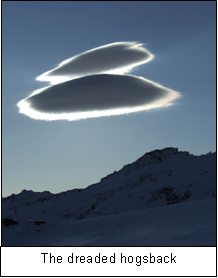 Quick out of the blocks on Friday night at 5.30pmish, Snowcraft 2 set off for our second trip to The Mountain. Due to delays from phaffing, traffic and phaffing, some had to consume their Bulls kebabs on-the-run.

The sun-gods seemed to have turned their back on Whakapapa this time, choosing instead to warm the faces of those left in Wellington (we missed you Donna!). The grim mountain forecast didn’t stop the intrepid Elite squad from heading out early Saturday morning for a summit attempt. 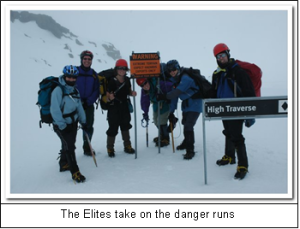 As the clouds darkened and the dreaded hogsback increased in size, the Elites began to question their initial enthusiasm for the exposed summit route. By 12 noon the visibility had reduced to hand-in-front-of-face. After a bit of hopeful circling around, snack breaks, and photo opportunities, the squad decided to head back down. To maintain credibility, only wind-exposed low-visibility advanced routes were taken on the return leg (thanks Steve!), therefore reducing the percentage of bum-sliding opportunities. 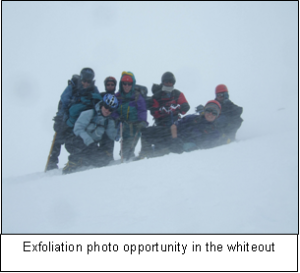 The Podium group chose a different, possibly more insightful course for their summit attempt. With the expert guidance of Allen, they cleverly stuck to routes sheltered from the wind, and took a pass through the Pinnacles rather than heading for Glacier Knob; potentially more bum-sliding opportunities and less facial exfoliation from ice-laden wind gusts.

Saturday night dinner was a gourmet treat laid on by Mika, ably assisted by her charming partner-in-crime Hans. Her skills even extended to a gluten-free dessert!

We woke on Sunday to driving hail against the windows. The rest of the morning was spent in-doors soaking up Mike P’s knowledge on how to effectively hide an avalanche beacon in the store cupboard, and Sharron’s obvious disdain for snow caves (it’s not really an emergency shelter if it takes four hours to build). 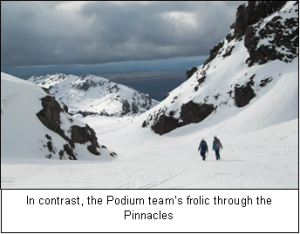 We set off at midday to battle the afternoon traffic and grab a bite at the bustling metropolis of gumboot-town Taihape.

A big thanks to Steve, Sharron, Mike P and Jenny for your brilliant instruction on the weekend. Despite the weather we all loved every minute of it.