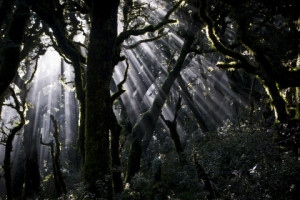 I grew up happily located between Kahurangi and Abel Tasman National Parks. As a youngster tramping for me was an enviable choice between silver beech in the hills or golden beach on the coast. So naturally, when I first moved to Wellington I looked down my nose at the Tararuas. A fellow Mainlander, John Pascoe, summed it up best when he famously wrote: [the Tararuas] “are to Wellington trampers what oatmeal is to Scottish people; dull solid fare which gives them staple virtues”.

Well now it’s a Friday after work, I’m no longer a youngster, have somehow become more a Wellington tramper than a Mainlander, and I’m in the club van heading to the Waiohine road end for my fix of metaphorical oatmeal. My fellow diners seeking staple virtues are Amanda, Kate, Megan, Sharon and Paul. 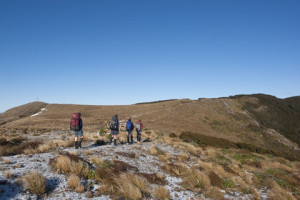 The plan is to walk into Cone Hut tonight. This is fine on paper but it’s a windy, cool and damp night, and as with oatmeal, I like the Tararuas least when they’re served cold. To cope with this we all over-dress before heading off. All except Kate that is, who being blessed with a perfect mix of toughness and foresight starts off cold so is at a comfortable temperature by the time the rest of us come to a halt, red faced and sweating, to peel off layers.

The walk to Cone Hut passes without incident, other than a 100m long killer worm blocking the track in front of Amanda. Well she said it was really big when she first came across it, but by the time the rest of us catch up it’s all of 3cm long (but we believe you Amanda- really we do!).

Thankfully Cone Hut is unoccupied when we arrive; I don’t think any of us fancied sleeping under the fly. I like Cone Hut. It’s simple and comfortable. However, its chimney is in need of repair as a bit of corrugated iron is loose and is making a terrible noise when caught by the wind. Kate, being a civil engineer, does some quick but complex mental calculus to work out various numbers relating to various letters of the Greek alphabet, and then implements her calculated solution by stuffing a bit of firewood in it. With that sorted we all hit the sack and get a good night’s sleep.

The next morning we wake to occasional showers and a light southerly. Our planned route goes up to Cone Saddle, then Cone itself, west across Neill Saddle and up to almost the top of Neill where we will leave the track and follow a prominent ridge down to Neill Forks.

Although it is cool we have learnt our lesson and don’t over dress. But before we reach Cone Saddle we have stopped to remove our raincoats as the showers have petered out. Although we don’t know it at the time there’s no more rain to speak of for the rest of the weekend.

We make good time with short breaks at the saddle, the viewpoint at spot height 812, Cone (topped with snow), and just beyond Neill Saddle where we stop for lunch. Continuing on up to Neill we easily find the turn off down the ridge because Amanda has a good description of where it should be (she’s not Chief Guide for nothing) and it is subtly marked for those who are on the lookout for it. However, it’s not long before we have lost the ridge. It seems like we probably weren’t the first to make this mistake based on the prominent ground trail that took us in the wrong direction. It’s not a big deviation and we’re back on track in 15mins.

The ridge route is sparsely marked by old blazes and occasional pink flagging tape. The tape and blazes are scarce to begin with but more frequent lower down the ridge and the going is easier here too, probably thanks to deer and possums. The route delivers us to the creek just upstream of Neill Forks Hut. The others don’t seem worried about getting wet feet. Indeed Amanda and Kate have the same type of boots which are actually clever foot shaped sieves made from something not much less porous than tissue paper, so have wet cold feet already. I on the other hand have a new pair of sturdy Germanic wonders that are currently housing a pair of nice warm dry feet. I take a risk and find a boulder from which to leap gazelle-like across the stream, thus keeping dry feet (ok so maybe gazelle-like is overstating it a bit as I was actually thinking I’m going to look a right ass if I stuff this up).

Once again we are treated to an empty hut. Most members of the group go for a wash in the river. Given the icy water this is madness to me. I didn’t preserve a pair of warm dry feet to then go for a spot of polar swimming. I seem to have a memory of Megan shivering in her sleeping bag on her return.

No matter, the fire is soon lit and an excellent dinner eaten. Paul gets some flak for not counting the chocolate biscuits he brought for dessert, as their number is not divisible by the number in our group. Doing my bit for the greater good I gallantly step into the breach and help eat the remainder.

A good fire and six bodies in a small hut equals about 40 degrees C in the upper bunk troposphere by the time I struggle up there. My sleeping bag has just celebrated its 20th birthday and shows its age by always being either too hot or too cold. The transition from too hot to too cold happens over a split second sometime in the middle of the night. The old bag’s zipper zipped right off the end in my frantic attempts to counter the too hot phase so I can’t zip it up during the too cold phase. Sigh… another bit of tramping gear to replace.

The morning dawns clear and crisp. It’s the type of morning that if it was the Swiss Alps there’d be yodellers yodelling or in the Andes whistlers whistling or in London rioters rioting. As it’s the Tararuas there’s none of that, and also because it’s the Tararuas sadly there’s no bird song to speak of either, like most of New Zealand’s bush.

We’ve really got this starting off cold nailed. No need for a layer shedding break this time. The air is rather cool but easily countered by the blood-pumping calorie-burning track that doesn’t muck about getting from the valley to the top of Cone Ridge.

Cone Ridge has some decent patches of snow on it (note we were there a few weeks before the big dump of 2011). As we approach Cone itself we get great views of the snow covered Tararua tops.

The rest of the trip out to the Waiohine road end via Cone Saddle is straightforward and a very pleasant end to what has been a really enjoyable Tararua weekend.

I’m not sure if I have gained any virtues, staple or otherwise, but I do know that sometimes, nothing hits the spot like a good old bowl of oatmeal.

Thanks to Amanda, Kate, Megan, Sharon and Paul. With this crew it would have been a great trip even if the weather was rubbish, the huts were full and the navigation inaccurate.