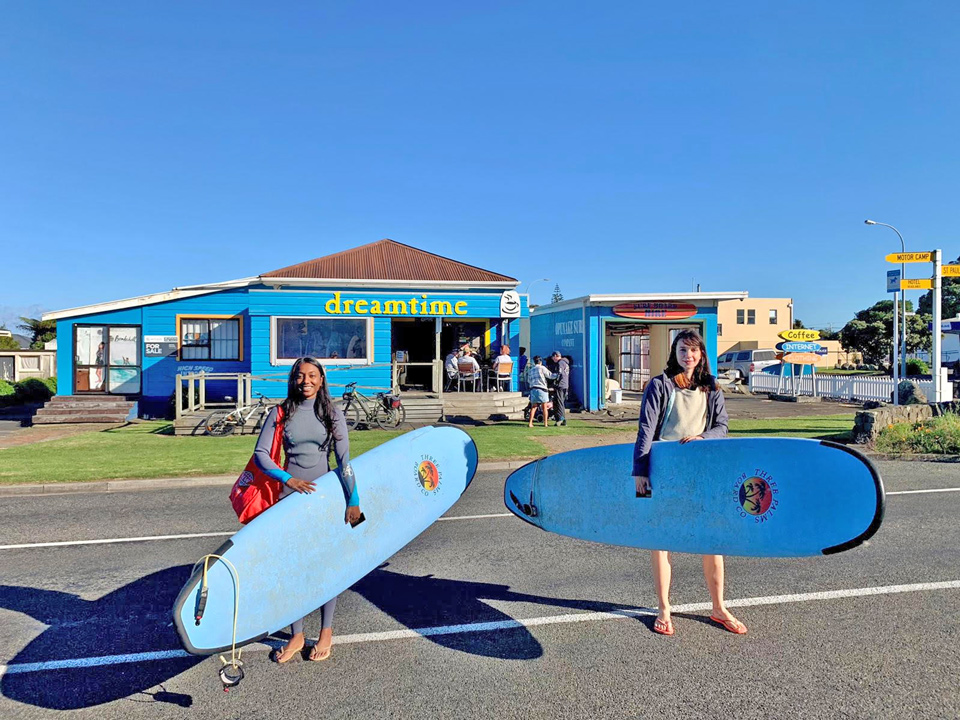 I was so happy when I saw there was a surf trip on the WTMC’s online schedule. I love tramping, but how cool is it to get to do other activities with your tramping friends!
As there was no leader yet, Werner and I signed up to lead the trip. The sheet already had Opunake as base camp, and we were happy to go with the flow. Organising a surf weekend is a bit different than a tramping one. We had quite some interest, but also quite some cancellations. This made us re-book accommodation and some changes on the rental (boards / wetsuits) numbers, but it all went very smoothly, and we found a very well-priced Airbnb two minutes away from the surf rental (and beach!).
We left on Friday at 5.30pm after a very different packing experience (boards, suitcases instead of backpacks, no need to prepare lunches…!) and made it to Opunake around 11pm. We did have the compulsory dinner in Bulls. We do believe in some traditions.
On Saturday morning after a nutritious breakfast we passed the surf rental shop and got the remaining gear.

We then headed to Opunake beach, and as in any surf trip, were very disappointed by the contrast from the 8/10 given by metservice surf and the non-existing waves. We chatted with some locals, checked magic seaweed and after visiting a couple of other spots we went into the water in Ahu Ahu. The quality of the waves got better as the high tide came in, and we were all becoming more confident in the water (despite it being a rocky beach break!).
After out fist surf, we left for lunch back to Opunake, picked some burgers for the ones who didn’t bring lunch and rested a bit at the Airbnb (not your usual tramp, I know).

Around 3pm, high tide came in and we went for a second session at Opunake beach, which welcomed us with windy conditions that made us feel just like in Lyall bay (but with bigger waves).

As the waves were really big and dumpy, we also caught lots of white water at this beach. Around 6.30 pm it was time to return to the accommodation for a hot (and short) shower and cooked a very spicy (for my standards) pasta dinner.
On Sunday we had the same drill, went to Opunake beach, got disappointed by the lack of waves and drove to another spot (I must say, driving along the surf highway is a treat in itself, with Mt. Taranaki always visible).

We arrived in Oakura where the waves and the weather were nicer. We had a fun session in the messy waves, having all of the team standing on their boards! We came back to Opunake to return the gear and a last shower at the accommodation (priceless) before heading back to Wellington.
We are already looking forward to the next surf trip and these delicious treats that come with it, such as Meneka’s brownie, Christina’s cookies and Katie’s sourdough. What a trip!