Billed as an Easy-Medium, the Kawakawa Hut trip sounded like just what I needed after a long break from overnight tramping and a hideous cold. As benefits a trip of this grade, proceedings commenced with a coffee at Martinborough and it was 11am before the actual tramping began. 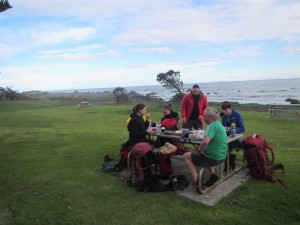 Being new to the area, I’d done my homework and assumed that we’d head up the Mangatoetoe and over a saddle to the Kawakawa. However, Andrei had other ideas and had secured permission to travel up private land in the Kawakawa valley. It was all new country to me, so I was happy to go wherever. The route took us up scrubby river flats, sometimes on a four wheel drive track. We were having a break about an hour upstream when the weather changed abruptly and it began to hail. Packs and parkas were hurriedly donned and away we went. The rain that followed had largely eased when we found ourselves at the hut a mere two hours from the road. Three hunters were in residence, and the prospect of squeezing six of us in had little appeal, so we decided to head over the saddle to Mangatoetoe Hut. 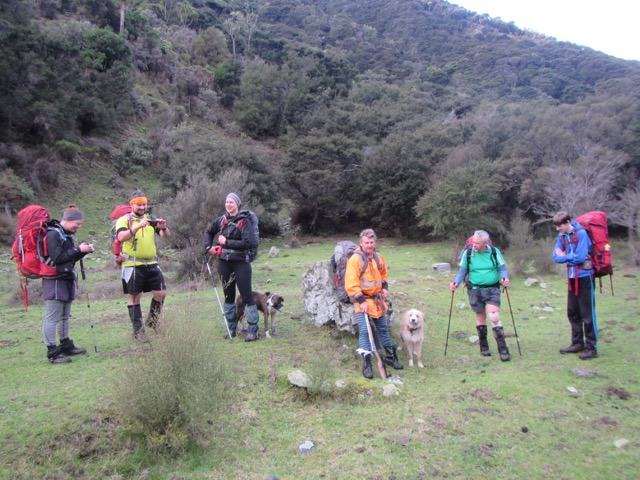 The route meandered initially up a bush-fringed stream, crossing frequently. This was more like what I’d come for. Then it was time to gain some height, which involved a fair amount of puffing and sweating and a few spots where finding traction in the mud was tricky. 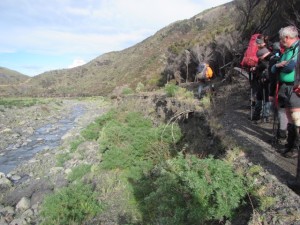 The route appears to climb quite a bit higher above the actual saddle than is marked on the map. I suspect steep gnarly stuff lies below. The descent, although less energetic, had its challenges, with a couple of bits so slippery that it was difficult to stay upright. Some of us ended up very muddy. Eventually we reached the valley floor and wandered to Mangatoetoe Hut, arriving just on 3 ½ hours from Kawakawa Hut. It’s a more spacious hut, and the gear there suggested there was only one person in resident. Bunks were claimed and a brew produced, and shortly after that our roommate, a hunter from the Kapiti Coast, emerged from the bush to join us. A convivial evening ensued, followed by the inevitable early night that comes with winter tramping. 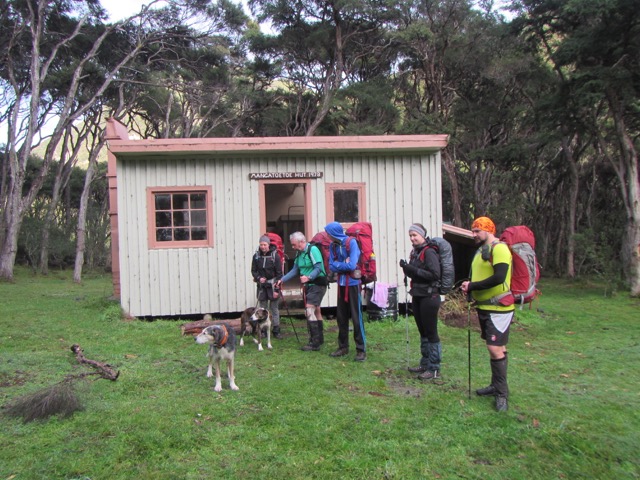 Our route change meant that our Sunday options were to retrace our steps – a challenge if we were to make the 1pm pick-up – or a late breakfast and a casual stroll down the valley. We chose the latter and were at the road about 11am. Although Steve the hunter offered us a lift to Kawakawa stream, 7 people and packs plus three dogs in one ute was going to be tricky and we’d have a long wait, so the decision was made to walk the road and hope for cellphone coverage. Coverage eventuated on the outskirts of Ngawi, which meant there was time for a quick lunch – coffee and fish and chips from the food caravan for some – before Kirsty’s crew arrived to whisk us back to Wellington. 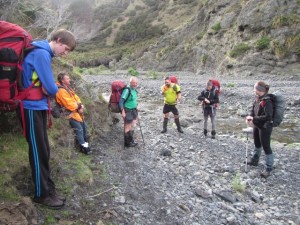 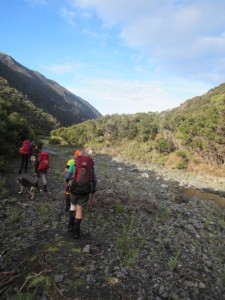