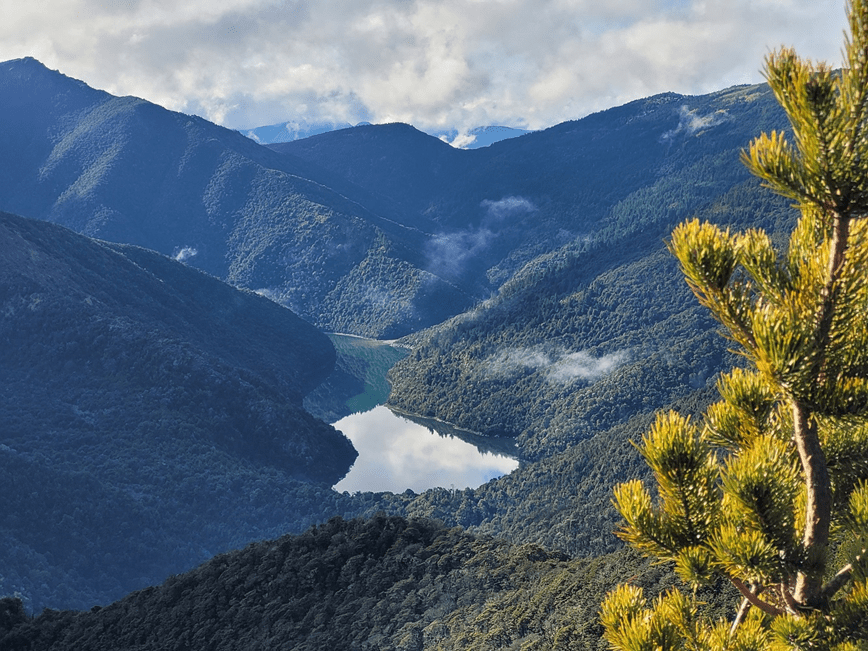 This looked like a cruisy easy medium trip – just what I needed when getting over COVID. Then, less than 24 hours before departure, an email from the trip leader arrived ‘due to an unexpected circumstance I may be unable to go on the trip . . . I was wondering whether either of you would be able to fill in and lead the trip if needed’. That was confirmed the next day, and there had been an earlier cancellation so what was a party of six turned into four. Needless to say there was some last minute re-organisation and thanks to Katie for her good planning, it was straight-forward to pick up.

We met at the station, along with the medium group who were sharing the van with us, in time to catch the 4pm ferry. Amazingly, it departed early and even made a faster than scheduled crossing. So we arrived around 7:30pm,  booked into our accommodation and then wondered what to do . . . we can confirm the movie theatre in Picton is not open in the evenings. We retired for an early night, glad we were under a roof because it rained hard.

The medium group wanted an early start so we set out for the road end, noting that what was rain in Picton was snow at higher altitudes. The hills were dusted with snow and the road end looked like a winter wonderland.

The medium party took off promptly and we followed more slowly behind them making the most of the snow dusted trees arriving at Lake Chalice hut on a sunny but cold morning.

The weather forecast for the weekend predicted a good day followed by deteriorating weather. We (or should I say the three others) decided make the most of the fine weather to climb up to Chalice Knob and check out the view. I accompanied them to the bottom of the hill and then spent my afternoon enjoying the sunshine, walking along the riverbed near the hut and collecting firewood.

The three walkers were able to climb to the snow and returned to the hut by evening. We’d been joined by a family of four for the night and once the fire got going it was comfy in the hut. Dinner was vegetarian nachos and much appreciated.

The next day was overcast with rain predicted later in the day. We set off to walk the circuit round Lake Chalice while it was still dry. On the way Becky decided to take a shower under a waterfall. Bridget and Julie extended their walk along the Goulter track.

The rain arrived in the afternoon so it was a good reason to light the fire, enjoy dinner and tell stories (ask Julie about her waterfall trip!). The dinner was pesto pasta – thanks Katie for the menu planning.

On Monday the rain cleared and the sun came out – much better weather than forecast. We decided to drive to the road end near Mt Patriarch and then walk from there. This went well apart from an incident with a rock that broke the van step leaving it dragging along the ground. With a bit of Kiwi ingenuity, bungee cord and string we we able to strap it up and continue the trip. The walk from the road end was pleasant with great views out across the Wairau valley and down to Lake Chalice. We picnicked on the rocks enjoying the views and the sunshine.

But alas, all good things come to an end and we were due back at the road end to pick up the medium group. Then it was out to Picton, a pleasant dinner and the ferry back home. It was the first time I’ve turned up at the terminal at the usual check-in time, an hour before departure, and been told to drive straight on to the ferry!

All in all an enjoyable weekend, even if not quite as cruisy as I’d anticipated. Thanks to the group for making it such a good time.