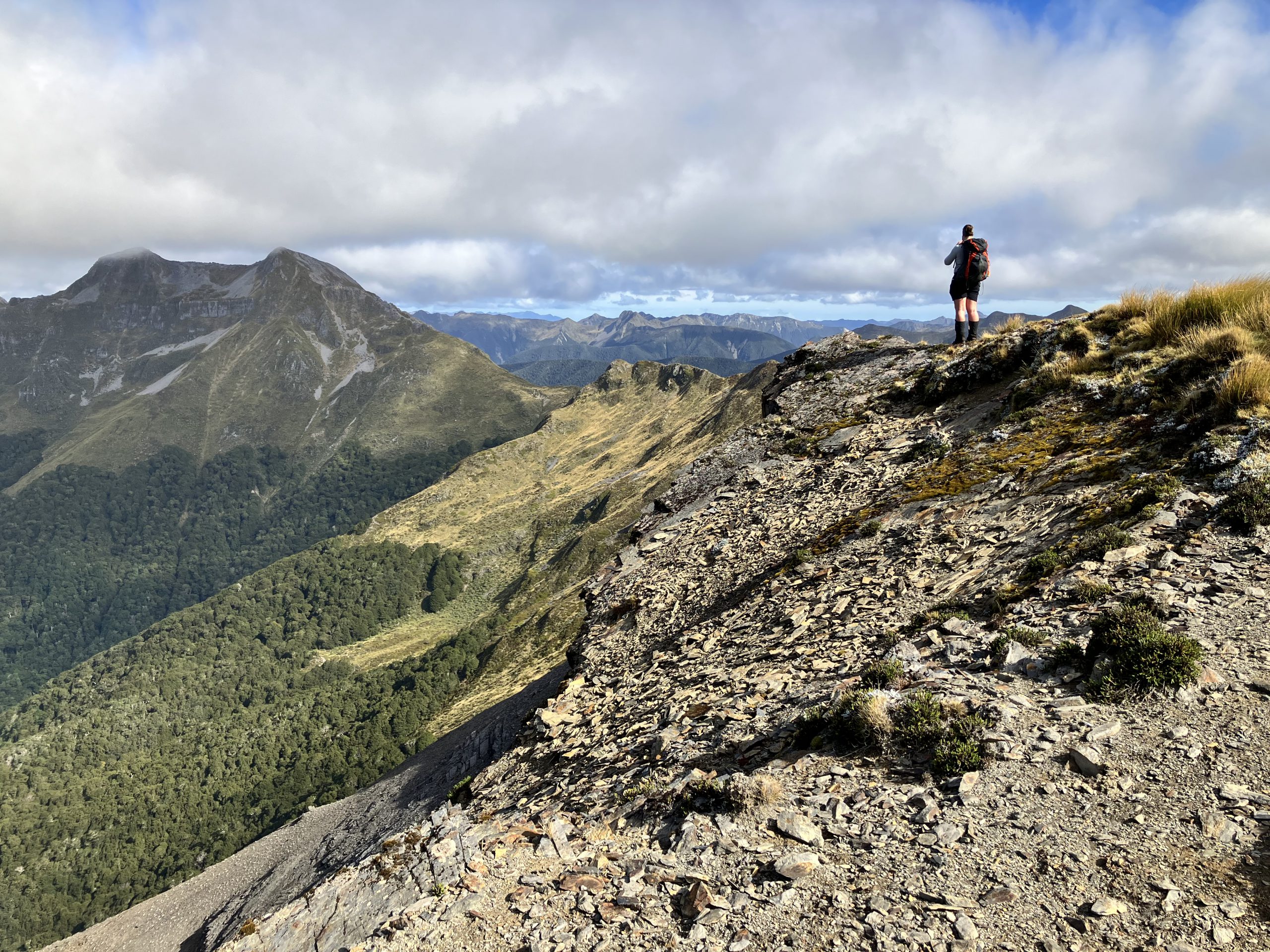 Thursday (3h20)
After the customary ferry delays and many dolphins, we drove to Rolling junction via a kebab shop in Richmond, arriving at the road end at 8.30pm after crossing the Dart Ford without issues.

With head torches, we walked at a good pace along the great wall grade track for a few hours. Arriving at Kings Creek Hut just before midnight and narrowly escaping being turned into pumpkins, we settled in for a chilly night.

Friday (2h30 + 5h)(2h30 to Stone hut + side trip: 1h to saddle, 1h to bushline, 1h30 goint to the top and break, 1h30 walk back down to hut)
We woke up to a bluebird day and made our way to Stone hut, on a good and fairly flat track. Highlights for this section included seeing an impressive number of Whio (which all turned out to be rocks) and spotting bush raspberries (?).

Once at the hut, we had a snack and then lunch before deciding to split the group. Monique decided to stay put and took full advantage of the facilities, including a little nap, a lot of laying down and reading in the sun. She also reported a large selection of cowboy books from the hut library, amongst which was an excellent biography worth carrying to the next hut. Meanwhile, James and Anne headed off again to Wangapeka saddle and up the ridge towards Biggs Tops. After enthusiastic stops to look at odd trees (a mix of spider plants and cabbage trees, which Monique later identified as Dracophyllum) and quality time with a curious robin trying to eat our boots, we finally got to the bushline and pushed a bit further to high point 1457, nicknamed Creme Egg Peak for the day. From there, we enjoyed 360 views of Kahurangi NP, over Karamea river, Mt Luna, Mt Kendall, Nugget Knob and Mt Patriarch. After a snack (you guessed it: Creme Eggs), we headed along the ridge and back down to the hut, where a warm fire and sleepy Monique were waiting for us.

Saturday (6h)(3hrs to Luna saddle, 3h to Kiwi saddle hut (including breaks and lunch)
After brekkie and a hot drink, the first obstacle was to cross the shallow river in front of the hut while keeping dry feet – which we managed with various levels of success.

We didn’t get fouled by a number of markers pointing in the wrong directions and headed up the stream along a reasonably good tramping track, although nowhere as good as the tracks to Stone hut. A number of friendly robins and fantails (including a black fantail) also followed us up to the bushline.

The markers stopped there, and we freestyled our way up to the saddle through the thick tussock and steep slopes. Once on a ridgeline, we were immediately rewarded by cold winds and light rain. Visibility was low and Mt Luna was nowhere to be seen. After layering up, we slowly followed the exposed ridgeline to high point 1578, with regular stops away from the wind, on the sheltered side of the ridge. As we started heading down, the fog cleared and the wind eased. We could see the majestic but narrow and terrifying looking ridgeline ahead of us: the Precipice of Death. We carefully made our way down, half walking half scrambling, avoiding lose rocks. A few stops allowed us to take in the views of Lake Luna and Mt Patriarch in the distance.

As visibility continued to improve, we saw a more gentle route along another spur and pass the tarn to join the bushline, which meant avoiding the Precipice of Death. We enthusiastically headed down and were at the bushline in no time, where we stopped for a late but well deserved lunch. A kaka sighting and a Creme Egg degustation later, we were back on the track, enjoying the safety of the bush as the sun shone through the trees. We arrived at Kiwi Saddle hut in less than an hour, with plenty of time to spare to savour a hot drink, soak up the sun, and defend our belongings from a cheeky weka. A pouch of hummus was taken for an impromptu trip into the bush, but was quickly retrieved.

Sunday (8h)(To high point 3h45, down to bushline 1h including 20 min lunch, 1h30 down gibbs route +45min on flat, +30 min to road end)
We all felt a bit groggy on the morning of day 4, Anne in particular who accidentally threw a full cup of water at Monique when a weka created an unexpected distraction from washing dishes. We hadn’t quite decided how far we’d go that day, overwhelmed by the options. A side trip to Mt Patriarch? Push on to John Reid Hut, or cut it short and head down Gibbs route?

Once packed up, we left the saddle and headed up the spur. A gentle start turned into a steep uphill to make it to the bushline, at the base of Mount Patriarch. Our heavy legs reminded us we were starting our fourth day tramping, and somehow the 400m elevation felt harder than the 1000m of the day before. Once there, the first of many difficult decisions awaited: would we do the side trip to Patriarch? Looking up at the thick clouds hovering over the summit, a split second was enough to find a consensus: we would skip the detour and push on to high point 1566.

The ridgeline was a bit easier to navigate compared to the day before – The absence of wind and few rays of sunshine made traveling on the ridge a lot more pleasant and safe. While visibility was sometimes low, the clouds were coming in and out and we had great views most of the time. Looking back, we finally saw the top of Mt Luna, Luna saddle, and the ridgline we had traveled on the day before. Once at high point 1566, the clouds around us had mostly cleared, and we finally saw the summit of Mt Patriarch.

This was our next decision point: Would we carry on to John Reid Hut: more ridgeline, bag a hut but a longer day and 2km on the road? or drop down Gibbs route: short but steep, more time along the river? Preferences were split amongst the group. After a civilised debate we decided to take the shorter route, with the hope of seeing whio along the river.

Walking down to the bushline, the unmarked track led us alongside cliffs and through unpleasant scree, at which point everyone was kindly reminded that falling and dying was not permitted on this trip. They all obliged and made it down without trouble. After a quick lunch at the bushline, we walked down the hill at pace, loosing almost 900m elevation in 1h30. The track was steep but in reasonably good condition, and we stopped a few times to listen to a symphony of bellbirds, tui and fantails. We also heard kaka and kea in the distance but didn’t see them.
Once at Gibbs creek, the track flattened and deteriorated. After a 45min slog, we reached the Wangapeka River. A couple of paradise ducks flew over us as we stopped to look for whio, who remained nowhere to be seen.

At this point, and after a full trip with dry boots, we had to resign ourselves to cross knee deep through the cold river. We got back on the Wangapeka track and walked the remaining 2km on the flat and easy track we had used at night a few days before. A good warm down before getting in the car and driving to Pelorus bridge campsite for hot showers.

1 thought on “Easter Weekend at Wangapeka and Tops”