Fourteen trampers started out from the railway station at 4.15pm. We had a long drive ahead of us – 6 hours up to Lake Tutira campsite, just north of Napier. We stopped for gourmet delights at Country Chef Fast Food in Dannevirke and then got back on the road. The campsite was only marked by a blue picnic bench sign, which we missed the first time but eventually found it and pitched tents quickly at 10.30pm.

The night was quite chilly and we woke up to frost on the ground. On the road again at 8am, we reached Te Urewera National Park a couple of hours later. The weather was fabulously clear and crisp. We continued along Lake Waikaremoana and a few km past the Aniwaniwa Visitor Centre to the trailhead.

Here we split into two groups – nine of us on the Medium tramp and the other five on an Easy tramp/boating trip. We set off at 11am at an altitude of around 600 m. The DOC sign at the start said 7 hours up to the Manuhoa Hut. I was a little bit worried as this was my first Medium tramp and the DOC website described route as “challenging walk.” But the track was fine, and while the pace was definitely a lot quicker than my previous Easy/Medium tramp, I could keep up!

It was a pretty steady climb up for the first two hours up through the forest. The path was easy enough, although a bit damp and slippery in places. There’s no water along the trail. The last couple hours was flatter, meandering up and down a little, nothing too challenging. Below the bushline we only caught a view once, where there had been a quite recent-looking landslide. But the forest was really pretty, very enchanted-looking, especially higher up where the ground was frosty. 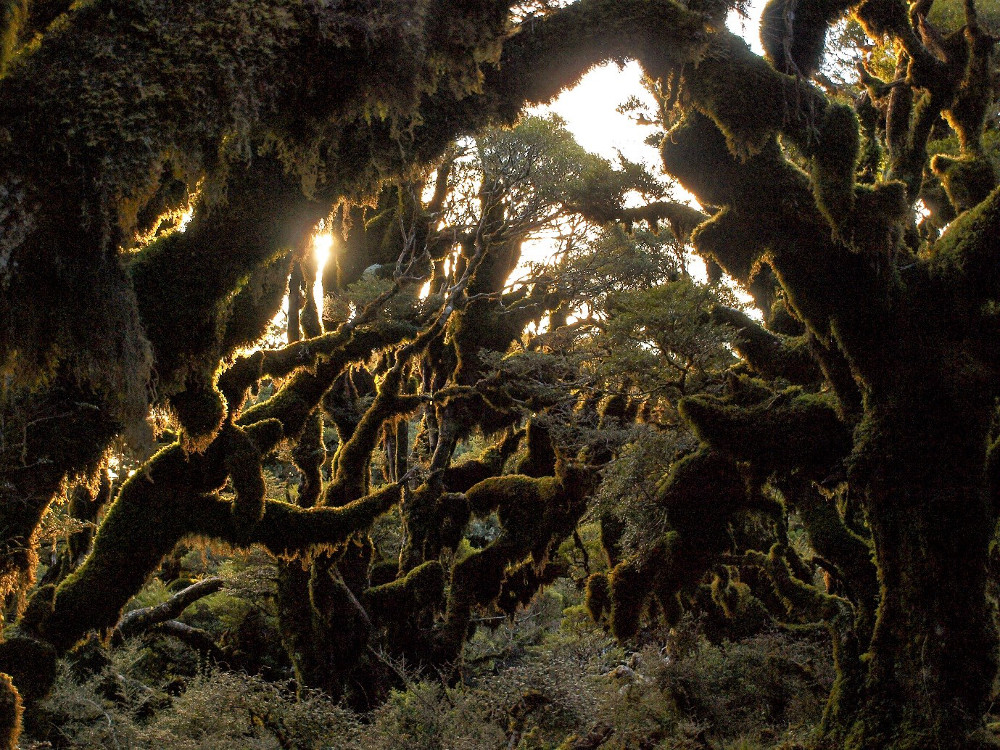 There was less than 100 m above the treeline before we reached the summit of Mt Manuoha at an altitude of 1392 m. The views were spectacular. Manuhoa Hut was just 5 minutes more along past the trig point. We arrived there very early at 3:30pm – much quicker than the DOC sign suggested. We arrived just after another group of hikers but they decided to camp so we could claim the 6-bunk hut. The hut was down in the trees so we went up and down to the summit to check out the view and the sunset – see photos! 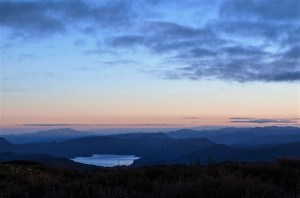 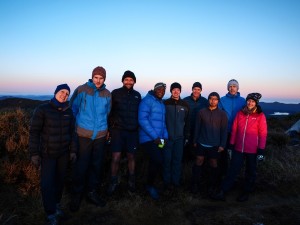 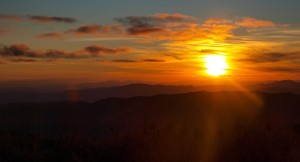 Two of our group camped and we easily fitted the remaining seven on the bunks. Another group of three arrived later and slept on the floor. The hut was small and dusty, a bit neglected and there was no dry firewood for the stove because everything was frosty. It was suggested that some of the missing things from the hut, like a box for the hut tickets, had been scavenged by other trampers for firewood… We had tasty pasta for dinner with feta, veggies, olives and pine nuts – what luxury! The hut got very warm overnight. The campers were fine but reported frost on the outside of their sleeping bags in the morning! It was definitely below zero but unfortunately no one had a gadget to check the actual temperature.

In the morning the sky was clearer still and we could see the snowy summits of Ruapehu and Ngauruhoe and the sea in the distance. We had a relaxed morning and left around 9am. We followed the track along a ridge through more goblin forest for most of the way, and descended 400m to the lagoon. DOC says “the way is marked but there is no formed track,” but there was a well-defined path all the way.  We tried to find a sunny spot by the lagoon for lunch but the path didn’t go very close so we gave up and sat amongst the trees. We arrived at Sandy Bay around 2.30pm, our trip time of 5.5 hours was well below the suggested DOC time of 8 hours. 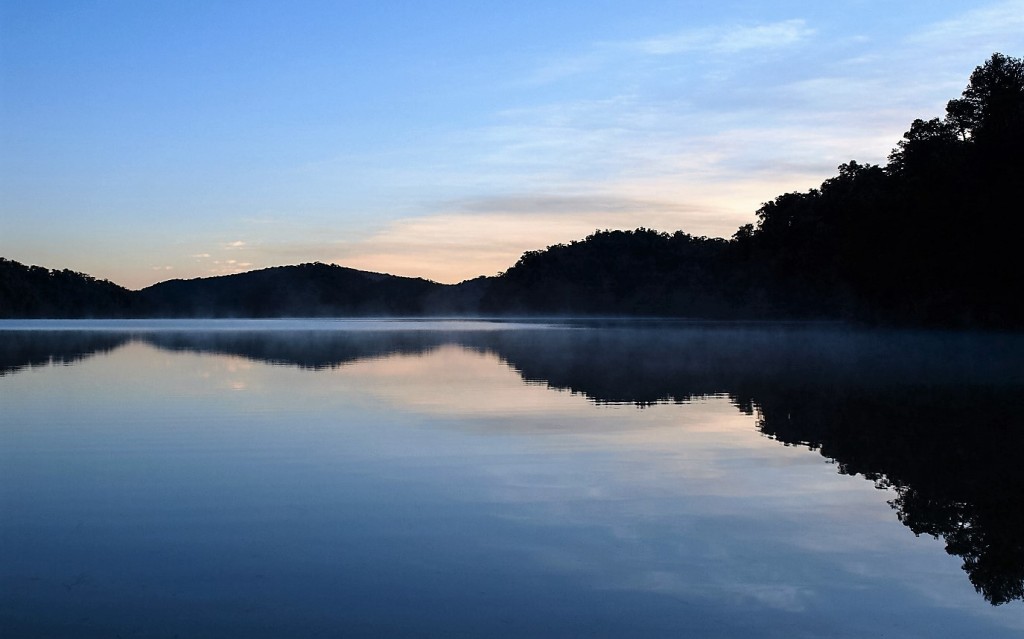 We caught the last bit of sun on Sandy Bay beach. The day was so chilly that the beach was still frozen in the afternoon! We had booked Sandy Bay hut in advance so no stress there. It’s a lovely hut – great views, warm, and it even smelt good. We played cards and enjoyed another good sunset and tasty dinner. The Easy group pitched up a little later in rowboats.

On the Monday we packed out and left at 7.30am. The trail out was straightforward and had some nice outlooks over the lake. Again the weather was cold and sunny, although with a bit of cloud moving in. It took us 3.5 hours out to the van where we reunited with the group that had rowed from Sandy Bay out. There is a detour on the track out, but we went straight back as we had a long way to get home that day. We stopped off a couple of times for pies and hot drinks, making it back to Welly before 8pm. 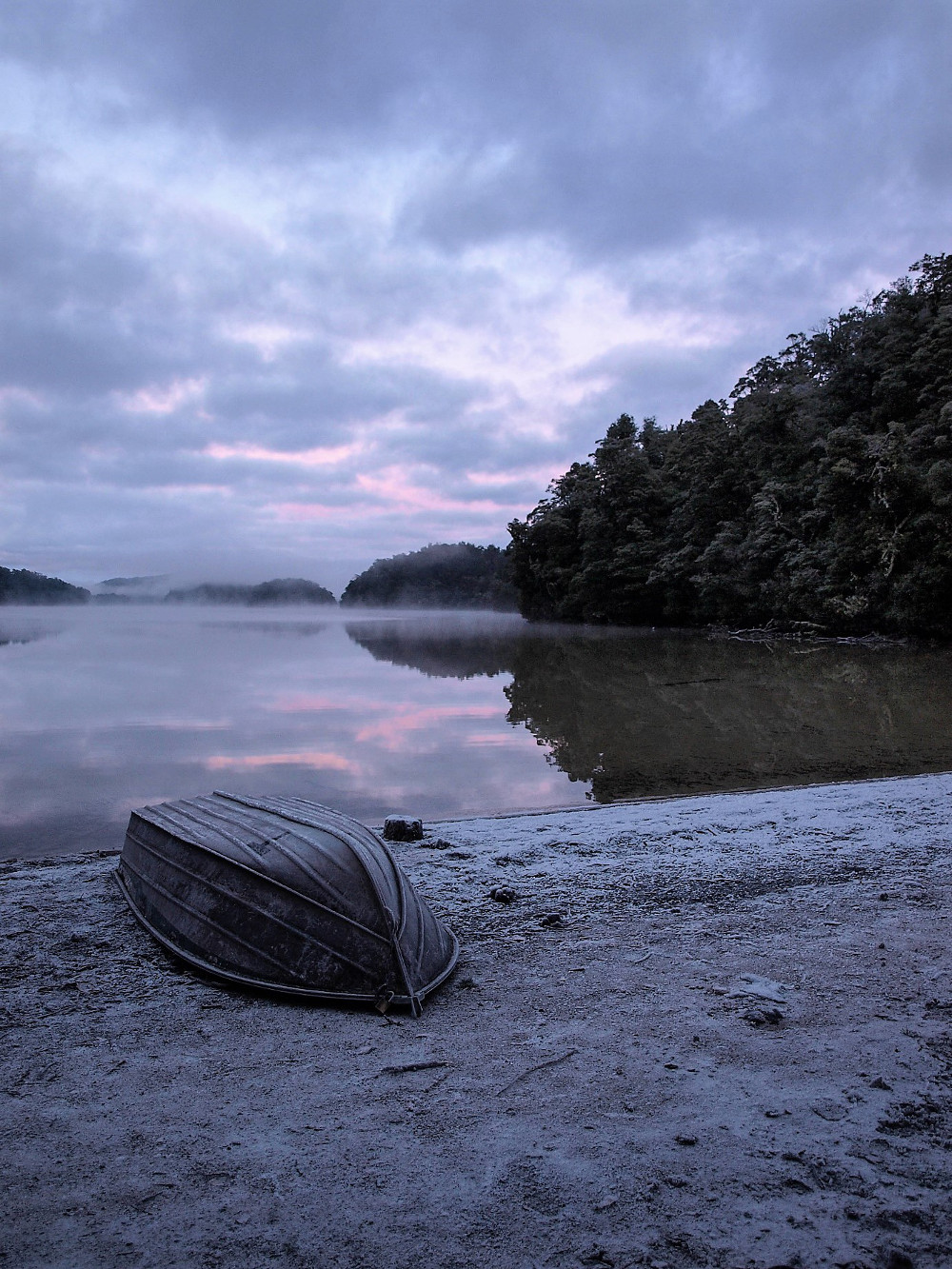 All in all, a great trip with some stunning scenery. We also thought the track was easier than the DOC website described. I would definitely recommend it.