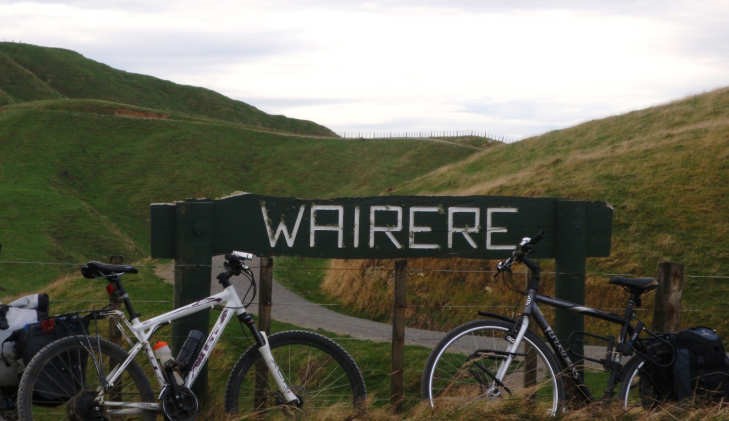 If people sign up for a Mystery Trip, they might expect that at least the trip leader might know where they’re going, what transport would be used, how long the cycling would take, and where they’ll sleep. This was however a Mystery Trip of the better kind, where such trivial things even remained unknown for the trip leader (Mika) as she had delegated part of the preparations to Hans. A few days before the trip Harry decided to join, which convinced us that the weather would be great for cycling. Harry also did a last-minute check on the Metlink website, and (similar to his previous experiences) the weekend trains to the Wairarapa don’t always run when you need them.

A quick call to Gareth, our beloved transport officer, helped out and the DPY was promptly made available to transport five bikes and ourselves over the hill. The trip was advertised as easy / medium, so we drove off on Saturday round 10AM from platform 9, and started cycling shortly after noon, but not without a caffeine shot. This all meant the ‘easy’ aspect had been dealt with, so we could focus on the medium part – a few hours of hills and gravel.

Leaving Masterton in easterly direction, soon changing to north-easterly, we headed towards Bideford, enjoying the lack of traffic once off the main road. Some buzzards, hawks, magpies, paradise ducks, a few kingfishers and lots of tree-twitters and grass-squeekers gave some counterweight to the omnipresent sheep. Although overcast, the clouds were sitting still at high altitude and allowed a sprinkle of sun during the day – perfect cycling weather. Shortly after Bideford the sealed road turned into gravel, and continued to climb to reach a saddle near Wairere Station. Good opportunity to have another stop, discussing loose associations such as ‘why here?’ to conclude that the answer would be the fantastic downhill section from here onwards.

With Eamonn and Harry negotiating the gravel on touring bikes, and the other three on broader MTB-tyres, the downhill proved to be not too scary and resulted in only one minor injury – a snakebite. Fortunately the victim was a tube, which could be repaired within a few minutes. Having less than 2 hours until sunset, Eamonn and Hans set out to be back in Masterton before the campground host’s dinner time. Probably the thought of buying some milk increased Eamonn’s speed to spectacular levels, so by the time the remaining three reached the Masterton campsite (quite a nice sample of a 1960’s campsite, if you’re interested in those type of things) hot water for tea was ready, and the tiny heater had taken the chill off the cabin.

We agreed that going shopping and cooking ourselves would take far too long – all hungry after 80 km – so we ventured out into High Street to test the local chippies. Mac’s (no – not the dreadful burger place) proved to deliver very reasonable fries, and a range of fish varieties. Eamonn muttered something about Irish spuds being better, or did he say girls? The luxury of city-life in Masterton (as opposed to hut-life) was found in the local supermarket in the form of vanilla ice-cream and vitamin B-rich rehydration liquid.

Meanwhile nightlife in Masterton carried on as probably on any other Saturday night, but we ended up only listening to the occasional screeching of tyres and some distant yelling and singing, to which Harry decided to add a gentle snore.

The Mystery destination for day two was a loop along Wainuioru and Gladstone, southeast of Masterton.  Having dropped the van just off the main park, the locals could see five cyclists touring along the minigolf, the duck pond, the playground, the mini-train, eventually finding their way out along the Henley lake. Some ten minutes later we were cruising along a quiet back road, and heading east we soon encountered a few vertical challenges. Needs a bit of work to get to the summit, but on sealed road the descent is a breeze – check the speed limits! Once over the range and turning south from Wainuioru, the road was gently undulating, again with hardly any cars.  Halfway point proved to be also the start of the last serious climb, over the range back to the Wairarapa plains. With blue sky above, views of the Tararuas in the east, and the plains far below us, the next five km were only downhill and just about ideal cycling, apart from the occasional passing pick-up truck.

Heading back towards Masterton, centre of the universe for this weekend, the traffic became somewhat denser for the next ten minutes. Another turn off the main road gave us some more breathing space, allowing to chat while riding. As Sunday’s tour was about 60 km, we were back in M. around 2PM, perfect timing for a wholesome lunch.  Earlier on the day we had spotted two public BBQ’s in Henley park, and with a pleasant autumn sun the idea of a sausage sizzle was convincing. A short visit to the supermarket (thanks Carrie!), followed by the chopping of onions, flipping of sausages and sun-dried tomatoes, resulted in a nice hot lunch for the cyclists, to the disappointment of the local ducks.  Next time we might think of a recipe involving waterfowl.

Driving back to Wellington was probably not the highlight of this trip, but the grand finale (through the Shell  carwash in J’ville) was certainly an indulgence for DPY.