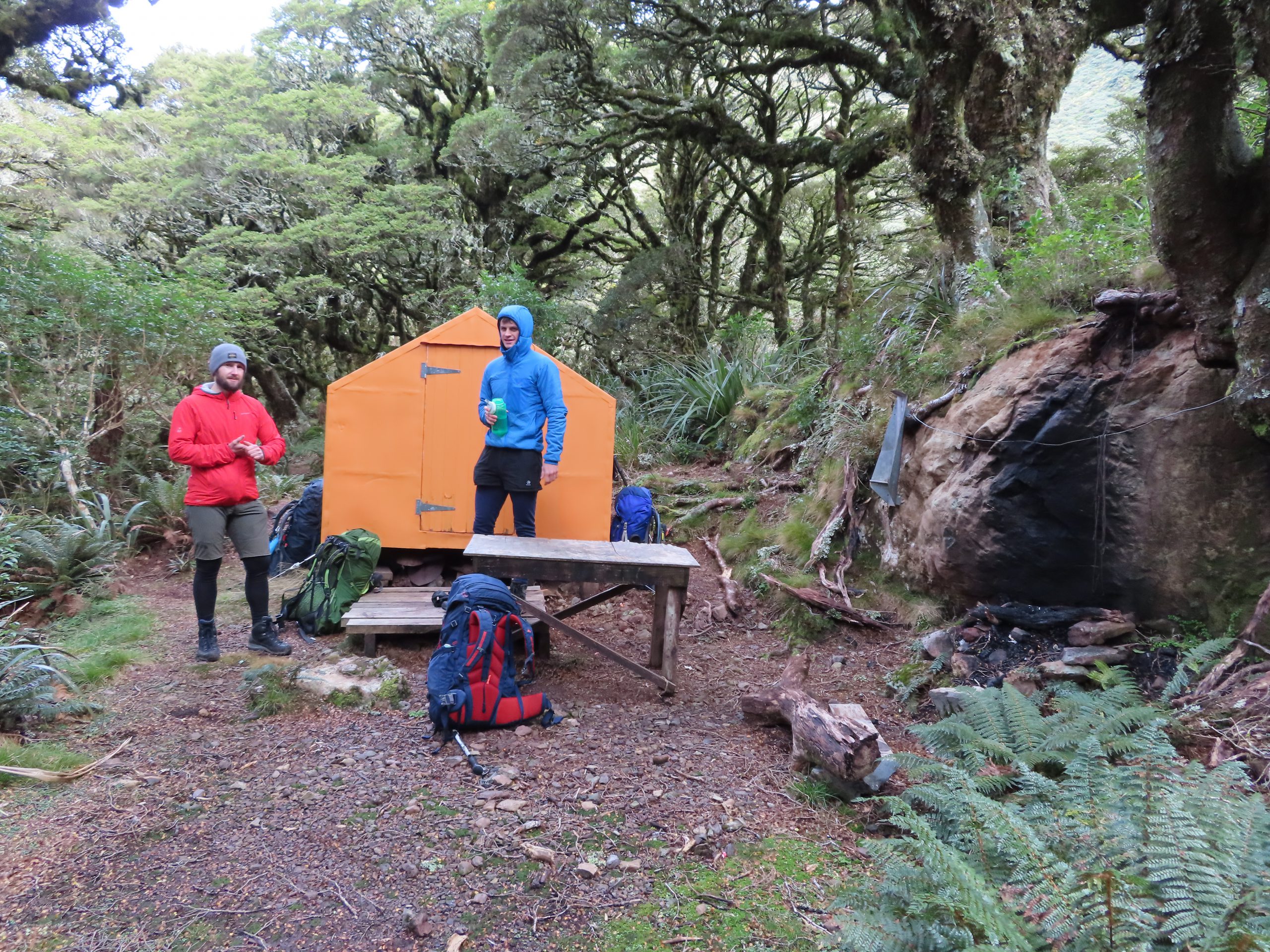 “Is anyone alarmed that I’m still considering the original plan?”

This question came on Friday night from our trip leader James after consulting the weather forecast to see that not only did we have a severe weather warning for the Tararua Range due to heavy rain rolling through, there were also gale force winds forecasted up to 90km/hr. We must have been a pretty hardy bunch as we all gave him a very enthusiastic and resounding “no!”.

We were on our way just after 7am the next morning and straight into the cold South Mitre Stream. The boys with their long legs seemed to just skim the water, while Christina and I ended up mid-thigh in it. James opted to keep his crocs on so that his boots didn’t get wet and did a very impressive job of keeping his balance on the slippery rocks. [For ref: wet socks, not Crocs, grip rocks – Ed.]

Once out of South Mitre Stream, we followed the spur up to Mid King Biv. There was a well formed foot trail that made it easy. Despite having around 700m of climbing we made it up the hill in good time. Just as you reach the tree-line there is a big orange triangle marker to indicate the turn off for the Biv and the track back down into the trees also has orange markers. I was delighted to finally reach Mid King Biv as it has been on my list for years and I was meant to do a trip to it last year around the time of lock-down. The Biv itself is a good shelter from the elements which we used as a cold wind was gusting through. After stopping to have a snack and put on multiple warm layers before we got up onto the exposed ridgeline we started our climb again into the wind.

We made it up to Middle King as a heavy clag rolled in and the wind gusted through doing a pretty decent attempt at trying to knock us off our feet. In a spot sheltered from the wind we had a discussion about whether to continue over Broken Axe Pinnacles to Jumbo Hut or take the escape route down Baldy. We eventually decided with the Baldy option as the wind was increasing and it wasn’t very pleasant up there, especially for a few more hours with no shelter.

On South King the boys were in front and started heading off to the left. I had a bad feeling that only increased as we descended and noticeably changed direction. I was sure we had left the ridgeline and were heading down a spur off South King rather than towards the junction for Baldy. I pulled out my gps as I knew battling the wind with a map would be futile. The GPS confirmed that my instincts were right. I called out to the boys and hauled them back up to the ridgeline. Christina was a bit disappointed that we had to face the full brunt of the wind again back on the ridgeline but at least we were now going in the right direction and didn’t have to backtrack much.

Once back in the bushline we had a lengthy discussion about whether we should climb back up to Jumbo Hut for the night or to Mitre Flats Hut. After a lot of discussion we finally settled on Mitre Flats Hut and arrived back at the hut to find a family there who had a nice warm fire established.

On Sunday we had a short walk back along the Barra track in the rain to the Pines. The Dad in the family group had some extra weight in his pack after his kind family slipped a rather large rock into his pack and he hadn’t noticed when we left. Apparently he also carried one part of the way into Mitre Flats Hut and only realised when they stopped for a snack stop and unpacked a rock instead of snacks. Back at the car while having lunch in the shelter at the carpark we had a visit from a few curious and friendly horses.