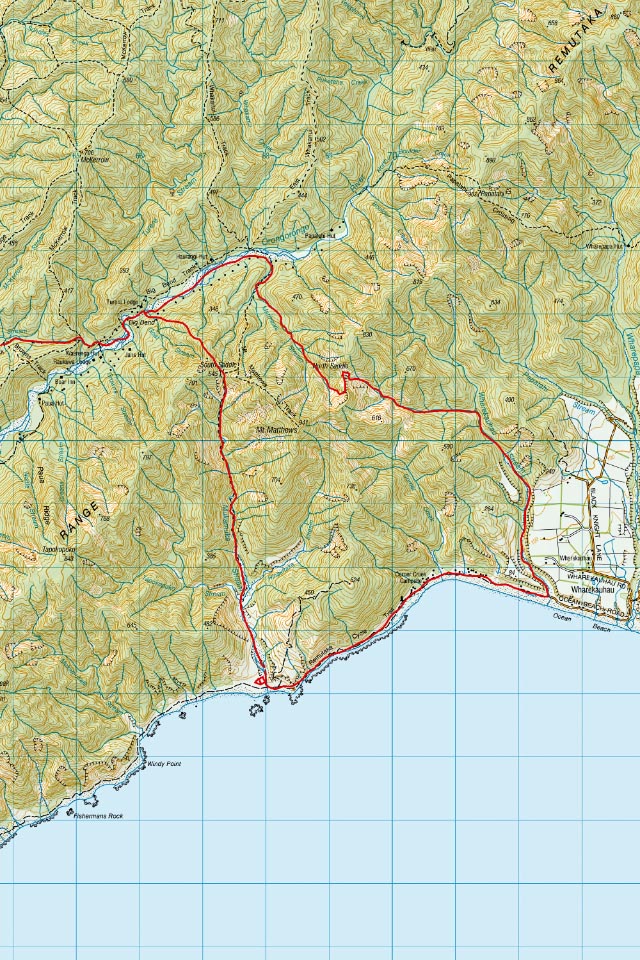 “The lights are moving—the aliens are coming for us now!” I jokingly teased Tony and suggested we both hide in our tents…

Tony and I had decided to do a two-day tramp exploring our own backyard a bit more—a circumnavigation of Mt Matthews that would include both on and off-track travel in the Remutaka Forest Park should prove that you can have an epic adventure close to home.

On Thursday mid-morning we left the Catchpool and followed the Orongorongo Track to Turere Bridge (or the ‘Banana Bridge’ as I like to call it). We met a few families walking out and one of the kids wished us ‘good luck’, after hearing we were doing a two-day tramp. I wasn’t quite sure what to make of that and if I should be worried by that sentiment . . .

Just after Big Bend we deviated off up Goat Stream. A few minutes later Tony and I were having a conversation on whether we had missed passing by the private hut—only for me to look up and say that the ‘missed’ hut was now right in front of me.

Embarrassingly there was a guy outside reading who had overheard our entire ridiculous conversation and looked like he was trying not to laugh when we stumbled into his hut clearing. But he did offer us a cup of tea.

We continued following the trapline up the ridge—it was like a potpourri of pink markers as there were a great variety in the styles—from ribbons, triangles through to spray-painted tin lids. Unfortunately, just before South Saddle the markers suddenly disappeared—I must have decided Tony and I needed some extra elevation as I decided we would go up and that’s where our fun began—a nice prickly bush bash across to the ridge just above South Saddle. I was crawling and slithering under dense scrub. This kind of thing is becoming a rather concerning pattern on Sarah and Tony tramps and something I have not properly addressed by getting me some gaiters.

When I finally emerged out into the open I was yahooing while poor Tony was probably not too impressed as he was still in the thick of it having a real battle of his own. We had emerged above South Saddle so it was a quick descent back down before we headed down into the Mukamuka Valley. I really enjoy the Mukamuka as it feels so wild and it changes so much as the valley opens out. I had only ever gone up it too, while running the Mukamuka Munter, so it was nice to have a change in direction that gave me a different perspective on it.

We set up camp down at the coast at the end of the Mukamuka on what Tony referred to as our ‘Little Island’, that was a nice flat and dry grassy area amongst the rocks and bog. I cooked up Tony’s favourite meal of Thai Green Curry from the club’s recipe book for dinner, and it was then that the bright lights started appearing to the South.

At first it appeared to be a single very bright light out at sea so we thought it was a ship—especially after it seemed to turn around and disappear. But intrigue and mystery—a few minutes later it reappeared and this time it was in the sky! This was when I decided it was aliens coming for us and decided I better warn Tony so we could go hide in our tents. Actually, it turns out the aliens did indeed come for us that night as they left their calling card by holding my merino socks hostage for 10 minutes. Tony listened to me upending my whole tent to find them before they were finally returned to me wrapped up in my waterproof pants of all things.

The next morning we had an easy walk around the coast on the Remutaka Cycle Trail to Corner Creek Campsite. The tractors on the beach here reminded us both of Ngawi on the other side of Cape Palliser. We continued around to the Wharekauhau Stream—it had some pinnacles at the start which were a nice surprise to see. Going up the stream we made good time as there was initially a four-wheel drive track that we followed for quite a while.

We had noted a ute parked part way up which alerted us to a hunter in the area. Not long after this we met the guy who was walking out because one of his hunting dogs had a severe injury caused by a pig that needed urgent vet treatment.

We continued navigating up the Wharekauhau as the valley narrowed and the boulders we were hopping got progressively bigger.

As we went up it started to feel a bit like we were in the South Island again as we were like small ants in a big valley clambering over boulders and watching goats meander along way up on the ridgeline. Finally, we got to the waterfall climb that Tony had mentioned and I had spent the last 24 hours really looking forward to! I managed to scoot up with my pack on after doing a recce of the available handholds but it was slightly precarious so we passed Tony’s pack up one step just to be sure, as the waterfall rocks were slimy and very slippery.

Eventually we began the final climb out of the stream to North Saddle. We ended up on some pretty steep grass, and at one point Tony’s foot and handholds both gave way at the same time. So he waited patiently while I backtracked down the slope a bit to give him a new reliable handhold with my walking pole while anchoring myself. We then decided that following this ridgeline up to North Saddle would lead us into another bush bash and we would also emerge above the saddle again, so we descended into the gully under us and took the scree slope up to the saddle. It turned out there was a bit of an animal/foot trail here anyway so this worked out well.

Finally on North Saddle we were rewarded with views back down the valley and out to Palliser Bay. We next turned our attention to finding a good way down to Matthews Stream. Last time Tony had done this trip he had done it the other direction and he had a good trail up to North Saddle but of course we couldn’t find the start of it this time! We did find a random orange track marker but unhelpfully it pointed straight into the scrub and neither of us were particularly keen for Bush Bash 2.0.

We eventually decided we would head for the scree slope we could see to the north and descend down that. Of course, getting there involved going through some more prickly scrub (notice the pattern here?!) but once on the scree we found it was a scree escalator that as soon as we stepped onto it, it took us automatically straight down and delivered us directly into Matthews Stream. The pink markers reappeared again once back in the stream and looking back we could see one further pink marker that was probably the trapline up to North Saddle. Our way with the scree escalator was far more fun though!

Once in Matthews Stream we had a discussion about what our plan was—we had considered camping out another night but there was forecasted rain and I was quite keen to head home as I was on night shifts the following night so was keen to have a sleep in. We picked up the pace, powered on by the marshmallows I was carrying, so we could be out before the gate closed at 6 pm.

The stream was easy to follow down to the Mt Matthews track and the Orongorongo River. The highlight here, and going through Matthews Stream, was seeing all the Northern Rata in flower which as Tony said was a good sign as possums if they are around decimate these. The rest was easy walking that we could zoom along and we made it back to the car with plenty of time to spare.