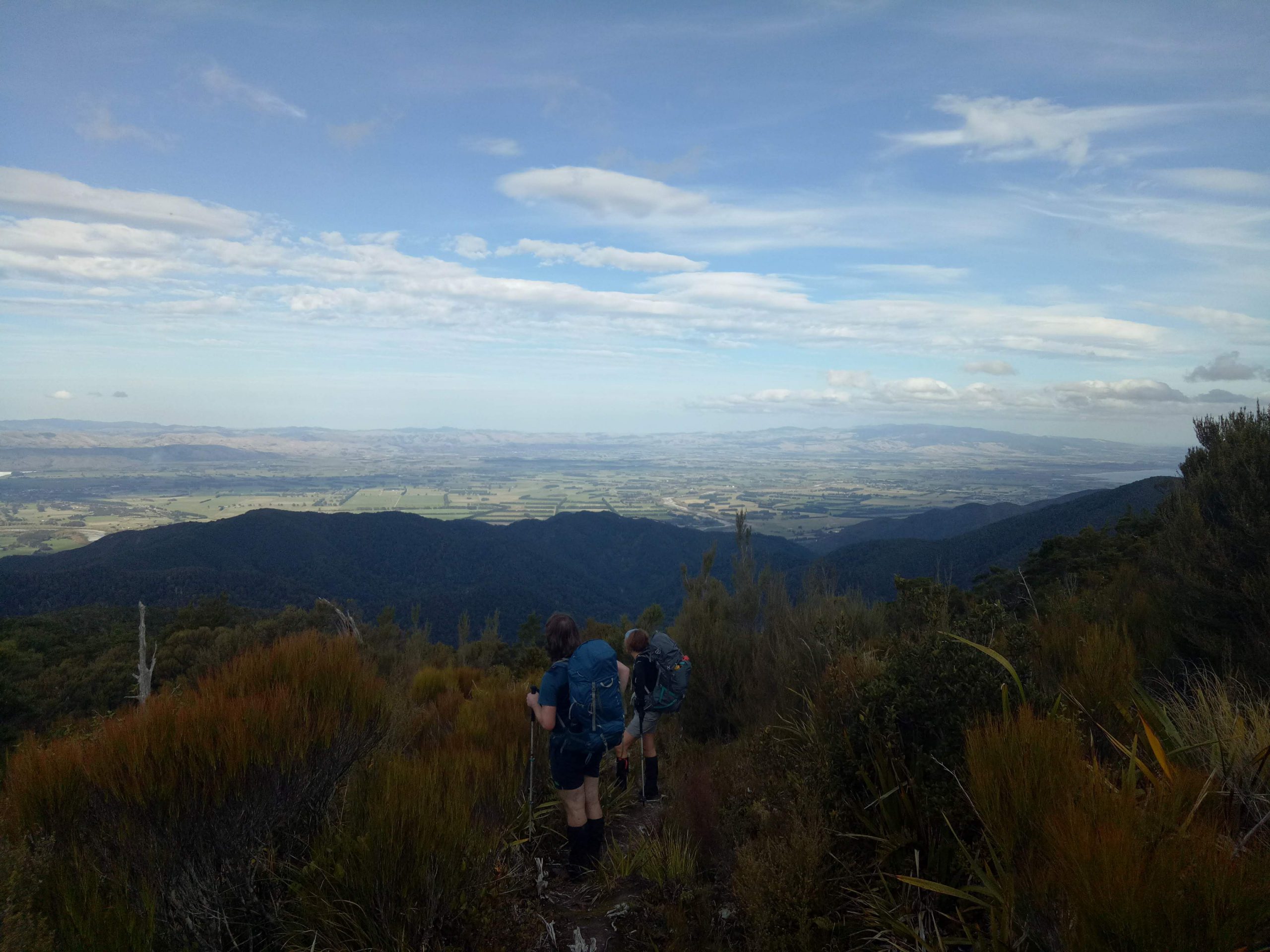 We shared a van with a medium group heading to Alpha Hut, and left Waiohine gorge road end at around 9:30. We first “investigated” a trail that headed down to the river, before heading back and crossing the river on the swing bridge. We next “investigated” the start of the trail to Cone hut, before heading back to the Mt Reeves turn off, which is not sign posted and heads off downhill not far from the swing bridge, and before the main track heads uphill. There’s a sign a bit further on saying it’s not DOC maintained anymore, but we found it not much more tree-rooty and steep than parts of the main track to Cone hut, which is maintained. The track headed reasonably steeply uphill through some lovely dense bush, before flattening out and heading along the tops, with the bush eventually opening out for some great views across the Tararuas and Wairarapa.

We had an excellent lunch break in the sun by a large plaque noting the centre of the New Zealand extended continental shelf, and then headed over the top of Mt Reeves and steeply down the other side to Tutuwai hut. We saw some weird/cool mushrooms on route, including some purple and green ones! It’s quite a nice hut and arriving a bit after 3PM: we were amongst the first there and got settled in and had lots of tea and then an early dinner (Soba noodles with veges and satay sauce, was pretty good!). In the end it was nearly all bunks occupied, and a somewhat high spirited girls’ school group camped in a nearby clearing. There was a shared crossword and another group constructed a new sign pointing to the hut from the Cone hut direction, after various people had struggled to find it.

We had planned to get up early to avoid some of the forecast rain on the way out, but it was already entrenched at dawn. The school girls were looking a bit damp. We joined them out in the rain and headed up river, which was quite a pretty trail. The Alpha hut group got to Cone hut just before we did, and we all had a substantial snack stop. The two trips essentially merged from here and headed over the hill to the car park without really stopping, as it was really quite wet! Everyone was in good spirits though and we were a bit staggered arriving in the car park, which was quite handy for using the shelter to get into dry clothes as everyone was completely soaked through. It was only midday at this stage so we were fairly unanimous in being keen for a coffee stop in Greytown, and then on to Wellington.