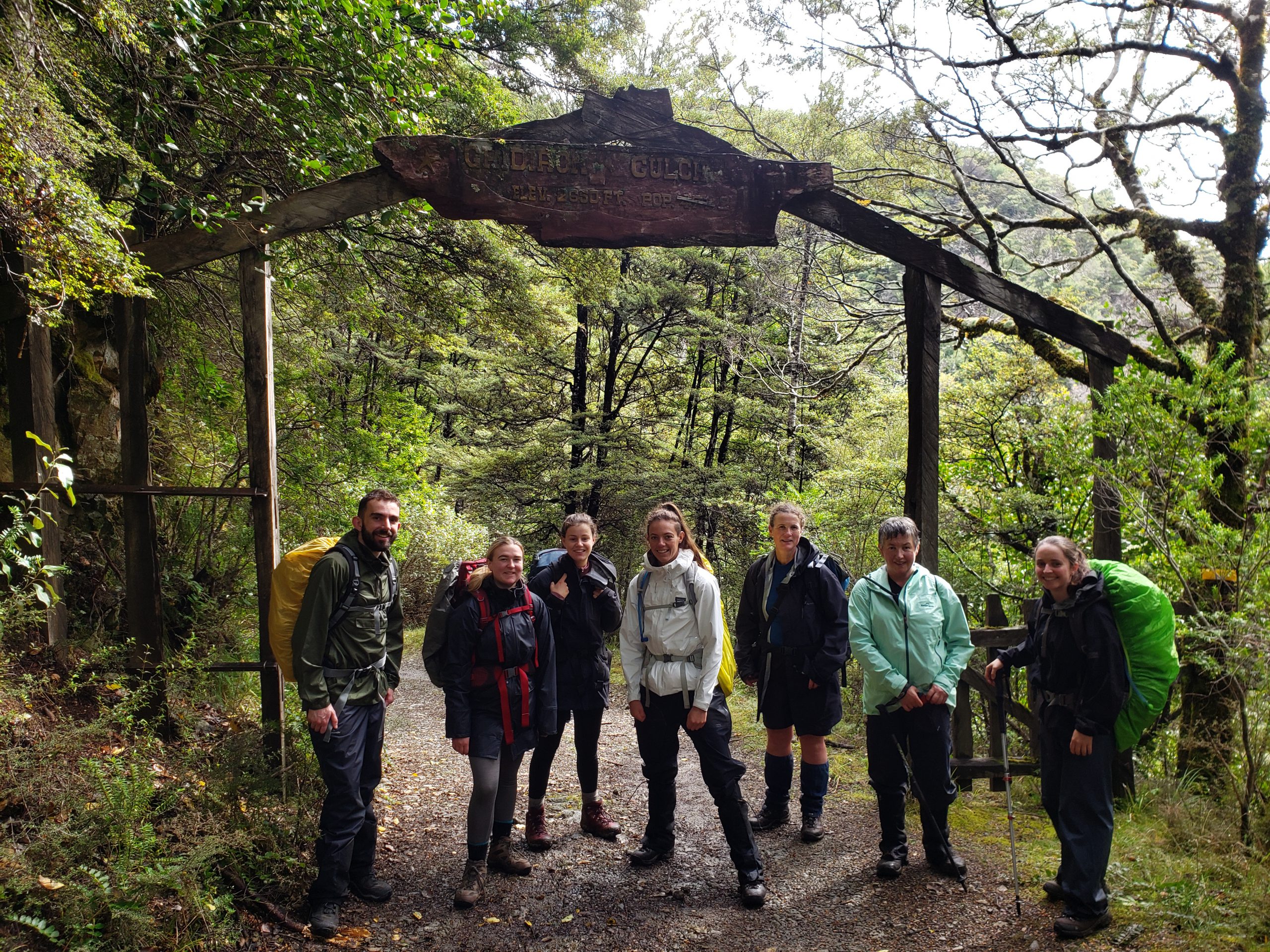 Thursday 1 April: Our Easter weekend’s tramping began with a late ferry crossing to Picton, where we stayed in a bunkroom at Sequoia Lodge Backpackers.

Friday 2 April: Next morning we drove to Kahurangi National Park, with stops at Pelorus Bridge and Motueka. We arrived at Cobb Reservoir roadend in the early afternoon and set off up the Lake Peel track in light rain. That didn’t last too long but conditions were damp, misty, and windy across the Tablelands all the way to Balloon hut. We reached the hut at 6pm, and shared it with a family of four who had already got the fire going. Nice!

Saturday 3 April: On Saturday we walked to Salisbury Lodge, had an early lunch, and headed off on a day walk to Mount Arthur. Our route took us over Gordon’s Pyramid where we found conditions too windy on the exposed parts, our goal deep in cloud cover, and probably insufficient time to get there and back before it got dark. We decided that Mount Arthur was no longer a viable destination. While we pondered our options in the lee of Gordon’s Pyramid, Dan whipped out a crossword and plied us with clues. The new plan was to descend on the Clouston’s Mine track to Flora Stream and check out the various rock shelters (Upper Gridiron, Growler, Dry) on the circuit back to Salisbury Lodge. Friday’s low cloud gave way to a clearing sky.

The lodge was expected to be full to bursting that night and some of us were interested in staying the night at Dry Rock Shelter instead. Others, however, were doubtful about the suitability of their sleeping bags to cope with a likely chilly night. We had to return to Salisbury Lodge anyway and soon met with a group of seven heading to Dry Rock Shelter with the intention of overnighting there. No way would there be room for our group as well.

Salisbury Lodge that night was full. A few people were outside in tents, but with the decamping of the group of seven, no one had to sleep on the floor. Well, Dan did, but that was his choice. Avoiding a snorer, possibly, or maybe to gain a warmer spot by the fire?

Sunday 4 April: We walked back to Cobb Reservoir via the Salisbury, Upper Tākākā, and Bullock tracks, plus a three-kilometre walk along the gravel road to the van. Our lunch spot was by the high point of the Bullock track. After another break for snacks and reorganising gear, we drove alongside the reservoir to the carpark for the Sylvester Lakes track. The walk to Sylvester hut took 1 hour 35 minutes. It was a relentless uphill slog for me, especially with three blisters forming (first time ever!) after a longer day’s walking than I’m used to. This hut was also looking to be over-subscribed so around half the group set up tents in windy conditions, mostly within the bush. A family atmosphere prevailed in the hut with half a dozen youngsters making themselves at home and also keen to join in on a games session.

Monday 5 April: All the tents coped with the overnight wind. After a walk to Lake Sylvester and Little Sylvester Lake, we returned to the van and then got on the road with the intention of seeking good food and coffee at Tākākā.

Alas, it was not to be. On the windy section alongside the Tākākā River, and before we reached the power station, a rear wheel clipped a roadside boulder and quickly deflated. We all got out and peered anxiously at the tyre, the instructions for how to change a tyre, and the back end of the van where the spare wheel was hidden under the chassis. Things weren’t looking promising. Trip leader Catherine then got a ride out to the end of the road by the bottom of the Tākākā Hill to seek mobile coverage for professional roadside help.

We, very fortunately, had found an excellent spot to park up and work out what to do. No one had much tyre-changing experience, and none at all on a 12-person van. The instructions were at first confusing, but the team worked through them doggedly. While we puzzled and experimented, many well-equipped, heavy-duty off-road vehicles passed us without stopping. The drivers obviously thought we looked very capable of dealing with the tyre. But in just under an hour the new wheel was in place. Fingers crossed that we’d done it properly!

We reunited with Catherine, who’d cancelled the mechanic. But there was no time now for a side trip to Tākākā. Our new aim was getting to Picton uneventfully and in time for our crossing to Wellington – which we accomplished. A very enjoyable trip and Mount Arthur remains for another attempt in better weather and with more time.