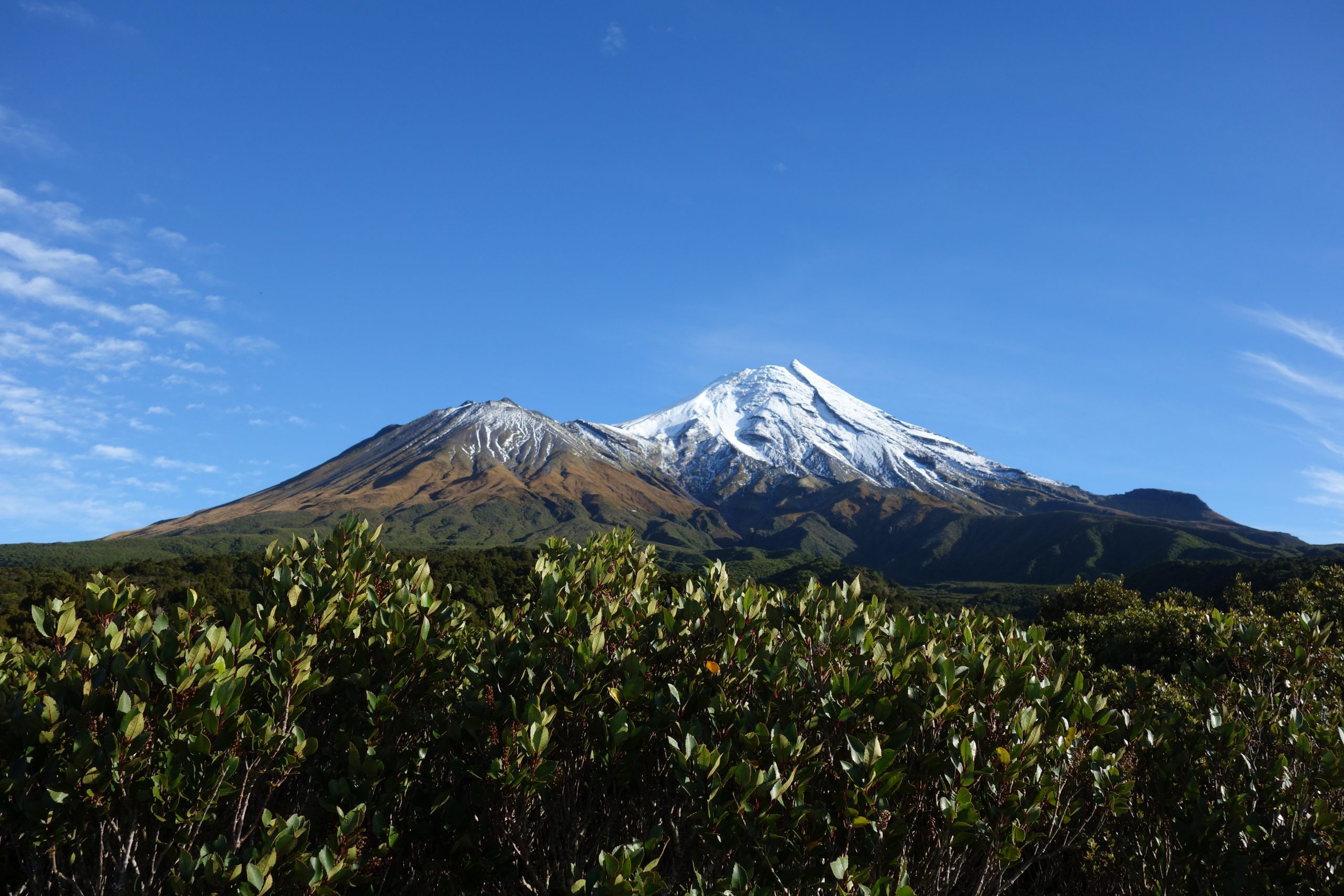 Having done the drive up to Taranaki on Friday night (as is traditional), we and the Easy-Medium group all stayed at Konini Lodge at Dawson Falls visitor centre. It’s a great facility with cooking equipment, hot showers, decent bunk rooms and the rest; although in my experience it’s always been cold – consider yourself warned.

Saturday dawned unnoticed as our group had the luxury of a lie-in thanks to some clever planning by Tash: stretching the very limits of the definition of a ‘medium’ tramp she had organised our first day’s tramping to be just a few hours on perfectly benched track with almost no contour lines to cross. Thus we had a leisurely start and after eventually packing up and having a little wander and a coffee stop around Dawson Falls visitor centre we set off towards Dawson Falls themselves, a few minutes’ walk from the visitor centre.

Next, we pushed the boat out a bit and walked up to Wilkie’s Pools, around a full kilometre from the visitor centre. These are a series of volcanically- and water-sculpted waterfalls and pools which are well worth a look.

Suitably warmed up, we came to the main event: tramping to Maketawa hut via Manganui skifield and Tahurangi lodge. We stopped at both these landmarks to have a look around and to make sure we didn’t arrive at Maketawa Hut too early. I would recommend this sort of medium trip to anyone.

We enjoyed one of Taranaki’s rare perfectly clear days, with wall-to-wall sunshine and a gentle breeze all the way. It’s easier to let the photos do the talking.

We ended up arriving at Maketawa hut a little early in the day but also not a moment too soon, as we found the hut occupied by three families featuring small children and a couple of others. Shortly after we arrived a few more groups turned up and the hut was soon completely full. The atmosphere was lively and the wind picked up overnight leading to disturbed sleep for many of us (although still far from the worst night I’ve spent around Taranaki). The perils of a hut so close to a road end! (Dawson Falls – Maketawa Hut walking time about 3 hours)

Luckily Tash had a cunning plan to make sure we were all up and about nice and early: Sunday’s tramp was to be far longer and more technical than Saturday’s and we had to get back to Dawson Falls good and early to meet the Holly Hut group for a 1pm departure. Up at 6, we hit the Curtis Falls Track at 7am with wind blowing and clouds threatening.

The Curtis Falls Track is signposted at the Maketawa hut end with words like “steep”, “slip”, “overgrown” and other such dire warnings. To anyone who’s ever tramped in the Tararuas though, it’s a well-built and mostly easy to follow track; although it does cross several valleys, sometimes steeply. I’d say it’s definitely worth doing though as it’s a bit different to the (read: my) usual Taranaki trip of blasting up through goblin forest as quickly as possible to get to the snow and rock. Curtis Falls Track takes you through a totally different landscape of forest and rivers, with regular views of the Maunga itself in case you were at risk of forgetting where you were.

At the Southern end of the Curtis Falls Track we stepped out onto a metalled road, which created something of a sense of culture shock after the remote-feeling track. This was soon forgotten though as just across the aforementioned road was Mountain House – a quite fancy looking restaurant/cafe type arrangement. Having made good time we elected to stop here for a coffee break (sitting on the deck to save bringing dirt into the establishment).

Setting off again, the decision was unanimously made to divert 10 minutes to Waingongoro Hut for break-having and hut-bagging purposes (James and I now having only one hut left in the national park). From Waingongoro Hut it’s a swift up and down and you’re back at Dawson Falls with plenty of time to spare for another coffee. (Maketawa Hut – Dawson Falls via Curtis Track walking time approx. 5 hours)