Like the best laid plans of mice and men going astray, the bad weather predicted for Nelson Lakes National Park meant that our proposed Mole Tops tenting trip had to be altered.  The new trip would be the Moss Pass route going via Sabine and over into the D’Urville.

We had tented the night at Lake Rotoroa Camping Ground and awoke to a grey sky with the forecast rain held at bay. The lake was dead calm for our brief water taxi to Sabine Hut where our walk commenced. 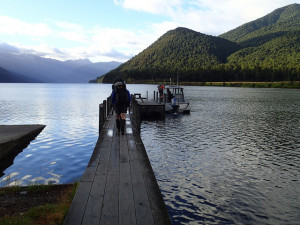 The track from Sabine Hut to West Sabine Hut follows the Sabine River for approximately 5 hrs. While it is generally as gentle as a lamb, the track in parts does require some exertion. It was here that some unwanted interlopers crashed our party – the nasty German wasp. Spencer was struck twice on this section – a case of twice bitten, shy and paranoid for the next three days.

After a quick pit stop to refuel at West Sabine, we headed for Blue Lake Hut. This was tougher with more ascent and the predicted rain had settled in making for less comfortable conditions.

We made Blue Lake Hut in about 3 hrs. There were members of the Peninsula Tramping Club already there but they graciously accommodated us by moving their items so we could literally air our dirty laundry. The rain, wind and paucity of dry wood meant it was cold in the hut and after a delicious meal we were in bed reasonably early. 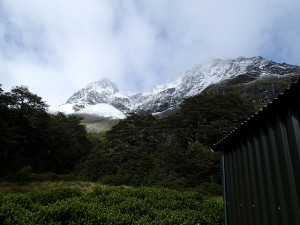 The weather had changed overnight and while it was sunny but was still quite cold with fresh snow and strong winds on the tops. We had planned for a hut day so it was into books, a bit of wood collecting, snacking and lolling around (amongst the books was the CUTC Trog Annual which includes a gruesome yet utterly captivating account of a tramping trip gone horribly wrong in the Zit Saddle on the West Coast – http://alpineteam.co.nz/2013/reflections-tramping-accident). A few of us went up to Lake Constance which sits at the top of an old moraine wall and provides views of the Spenser Mountains.

Later in the day the hut started filling up with mainly American Te Araroa thru hikers as it is the last stop before Waiau Pass. It was interesting listening to their shared experiences. They had a familiar complaint about the lack of ramen noodles (2 minute noodles for the locals) at the St Arnaud store. It seems to be the fuel of choice.

The morning weather was perfect for our ascent over Moss Pass. The climb was steep from the kickoff but the pay off was a great view of Blue Lake. 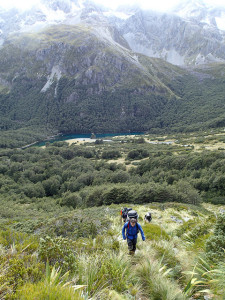 The slope gradually levelled off and sidled around to the final climb which looked slightly intimidating from a distance. The climb narrows into a small chute which is relatively straightforward but care is needed as the surface is quite unstable. Our party of eight chose to split into two groups to limit the possibility of injury from falling rocks. At the top of the chute there is a small false peak but once at the true top there are great views of the Ella and Mahanga Range. 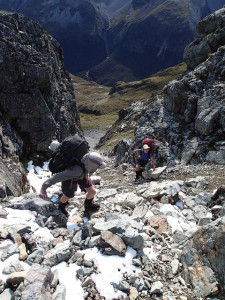 After a break we began the descent into the D’Urville. The descent is more of an endurance feat than it initially appears. The above bush line part is a collection of rocks than never quite allow for any scree running and larger boulders that require thought about whether to walk around or over. In the bush there are some large drops (one part has been informally roped) and slippery tree roots. 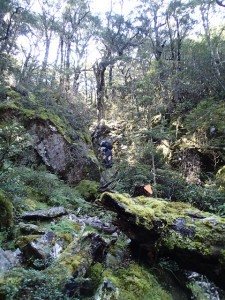 Once at the bottom and beside D’Urville River the walking is very easy. The track follows the river through the bush with occasional river meadows for about one hour to George Lyon Hut. The hut is in a nice location and has quite a unique layout with a small lobby area and two rooms containing bunks and cabinets. The heat was starting to take its toll by now and it would have made a nice place to stay but, in order to make our water taxi the next day, we needed to keep moving to Morgan Hut further down the river. 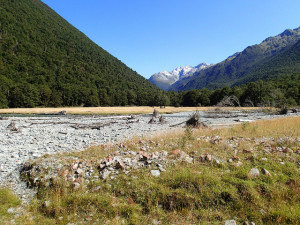 The walk between George Lyon and Morgan is basic river travel – the river flats and occasional dry creek bed broke up the bush travel. There were a couple more wasp stings to keep everyone on edge. The wasps were far more lively and prominent on this side of the range.

After three hours we made it to Morgan Hut which is situated in a large clearing. A few braver souls jumped into the nearby river. The hut was relatively full with anglers and hunters so most of our party tented for the night in the large clearing.

The sun was shining again and we were back on the track at our negotiated time of 8:30am in order to make our water taxi at 1pm. There really isn’t much more to be said about the trail here – it stays mainly in the bush and crosses the occasional dry creek bed and river flat. There is a short section of ascent near the end but it is miniscule compared to previous days.

At D’Urville Hut there was a short wait for the water taxi. Some familiar faces again jumped in to the water and had the unique experience of swimming with several eels. The wasps were almost carpet thick on the lawn out the front of the hut. They were starting to get a little agitated so it wasn’t a major inconvenience when the water taxi turned up early to return us to the Lake Rotoroa campsite. 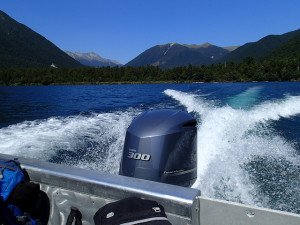 PS We stopped on our way back to Picton for ice cream and I can confirm that the St Arnaud store does lack for 2 minute noodles.