Yay, weekend! Flee from work, pack your backpack, don’t forget the communal dinner ingredients, and off you go to lonely landscapes and snow-covered tops, away from the constantly humming sound of city life. 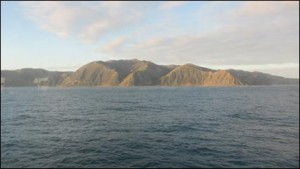 Debbie’s, Stephen’s, Steve’s, John’s and Weimin’s plan was to ascend Mt. Tappy, the highest peak of the Kaikouras whereas Mike, Antone, and I wanted to knock off Mt. Alarm, the slightly lower neighbour of Mt. Tappy. After postponing the trip from September to October due to bad weather conditions, the forecast didn’t look too bad for the first October week. Although rain was predicted for both Friday and Saturday afternoon/evening, we were quite confident that the fair-weather window in-between would allow us to reach the summits.

We took the 6 o’clock ferry and were rewarded with a lovely sunset right after leaving Wellington’s bay.

After arriving in Picton, we drove straight to the end of the road where the Hodder River enters the Awatere River and set up our tents. Mike had the pleasure to share his tent with me, and surprisingly, he manag 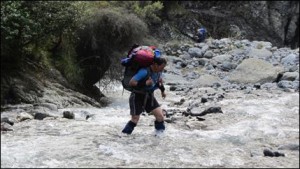 ed to get some sleep that night even without his earplugs.

Early next morning, we headed off to the huts (1400m) that are closest to the peaks and we had to master quite a number of river crossings. If Weimin counted correctly, we crossed the damn river 54 times. But I really don’t want to complain, that’s actually what makes tramping fun! Around 2 o’clock, we reached the huts which unfortunately had no fireplace but, apart from that, were in a very good condition. One Mt-Tapu-Team member arrived slightly delayed as the card-gambling session of the previous night on the ferry had turned out to be too exhausting.

After having a very delicious meal (s 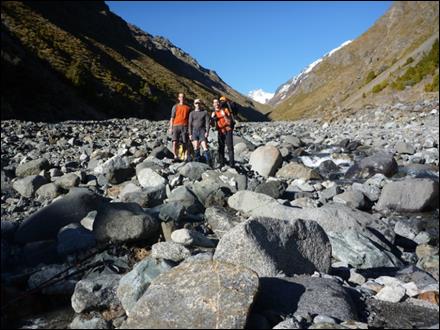 paghetti Bolognese without spaghetti, I had forgotten a minor thing at home…), we destroyed some crackers and chocolate to fill up some additional carbohydrates to be prepared for the next day. The plan for the next morning was simple: get up at three o’clock, when the wind is not too heavy, run off, otherwise take a nap for another hour. Repeat until you can finally convince yourself (and everybody else) to leave the cosy hut.

When the alarm finally went off at 3am, the sky was still clouded and the howling of the wind didn’t exactly sound inviting. So we slept a little longer and finally got out of the bags around 5am. After warming up with some cups of tea, we left the hut shortly after the other five punters who headed to Mt. Tappy.

On the way to the snowfield, we met John again who was fighting a cold and had decided to p 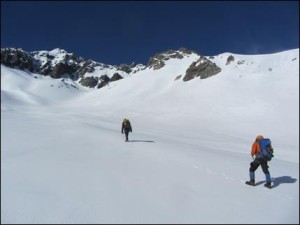 refer the comfort of our hut over the inhospitality of the icy and windy peak. After reaching the first snow and putting on the crampons, the terrain got gradually steeper and also more exhausting. However, the view was amazing and rewarded us for all exertions.

We first tried to ascend Mt. Alarm via a couloir in the middle of its north face but then decided to take an alternative route to the left as the original route turned out to be too icy to climb with only two ice screws in our packs. The new route worked better and the snow consistency was perfect for an ascent without having to mess around with ropes. Unfortunately, a combination of the weather getting worse and my carbohydrate level dropping below minimum prevented us from reaching the summit, and we had to turn around roughly 140 meters below it. I am pretty sure that this was the right decision, but in retrospective, the lousy 140m hurt a bit.

Without any troubles, we desce 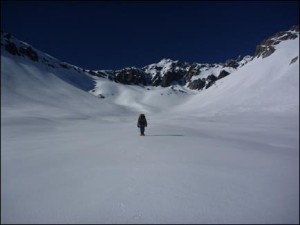 nded again and reached our huts around 2 o’clock where we met the other party again who were equally unlucky in reaching their summit. To solace ourselves, we prepared a delicious (i.e. non-vegetarian) couscous menu and spent the rest of the evening playing 500.

The next day, the weather was really nice, in fact so nice that I spontaneously, but, to be honest, not entirely voluntarily, decided to take a quick bath in the Hodder river. And yes, it was refreshing, I have just been lucky to still own a functional camera. After another 50 times crossing the river, we were all happy to see the WTMC bus again and to get our feet dried.