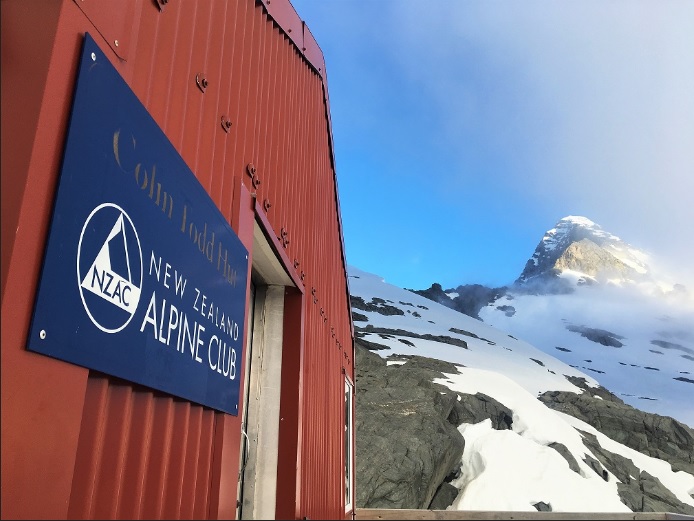 The usual trio of Elisabet, Nick and myself had been talking about Aspiring for at least a year, and plans finally came together for Christmas 2018. It was on. We’d had the helicopter booked for months, I’d be in Wanaka on the 26th, Nick and Elisabet would fly down to meet me, we’d have a few hours to get gear sorted and drive out to Raspberry Flats and the two day weather window was timed with our helicopter booking to perfection. What could go wrong? Fog in Wellington and some cancelled flights might be one thing.

But not to fear – Nick and Elisabet got a flight and it was still on! With those pair just back from a week of eating only freeze dried meals at Plateau Hut as part of their Aoraki/Mt Cook adventure, they put me on a strictly fresh food only diet for the next few days. It should take us 3 days but let’s plan for 5. Oh, and the guides at Plateau Hut were saying that it’s mega busy and you’ll definitely need to bring a tent. Alright then, but I’ve only got a 35 litre pack with me so that’ll be fun. Should I bring my rope for the abseils again? Yes, let’s do that.

We left Raspberry Flats at 15:00 and after an exhilarating ten minute chopper ride, we were dropped off at Bevan Col not really knowing what to do with ourselves.

Okay, rope on and let’s get to Colin Todd. Ready? Great, let’s go. No wait, nobody has any crampons on. I think I heard Nick utter fiddlesticks under his breath. Packs on again and we were off, Nick in the middle of the rope carrying a large plastic bag full of fresh food which looked like it would last for years not days.

Colin Todd hut was reached in under 2 hours. It was busy but we had bunks and nobody else turned up that day which was surprising given the forecast we had.

The other teams present were made up of guides and clients and were aiming to leave around 04:00 for the summit, so we elected to give a bit of space and set off 30 minutes after them. On the flight in we could see that The Ramp was broken up, but the Kangaroo Patch option looked good so we decided on that. Alarms were set for 03:30 and we did our best to get some sleep despite it still being light outside.

Daylight broke as we neared the top of the Kangaroo Patch and got onto the rock of the ridgeline. The terrain looked fairly straightforward so we decided to move together and I took the lead. From memory of the topo the route hung low from the main ridgeline so I followed my nose and fun easy climbing ensued. The climbing got even easier and we traversed a snow slope or two, but it turned very bare in places with little opportunity for gear placements.

Still, once we joined the saddle where The Ramp joins we took the rope off and enjoyed a wide open view of the summit.

From here the ridge broadens out and it’s a steep slog up to the summit. The snow was great for us but if icy it would have a very different feel. The guided parties summited ahead of us and we passed each other as they came down and we continued up.

The summit was reached at about 10:30 and, with the wind really kicking off, we stayed for a quick photo and took in the view.

Back to the saddle for a lunch stop and a reprieve from the wind. Good scrambling followed all the way back to the abseil points, we were just loving this and were in no rush to get back to Colin Todd!

If I were doing this route again I’d definitely try and get onto the main ridgeline as soon as I could on the climb up.

Several snack stops ensued, and in the end despite carrying that second rope (the one that was “for the abseils”), we did not use it for the abseils and did 2x 30m ones instead. Fiddlesticks indeed.

We ended up getting back to a full hut at 15:15 and relished the remainder of the fine weather by smashing enough food so that we could squeeze everything into our packs – no more shopping bags on the glacier.

Everyone that had summited that day had the same plans to walk out via the Bonar so we were happy when the guides told us the Quarterdeck was still passable. The next morning we got an early start ahead of the guided parties and it was all easy going.

The Quarterdeck was still intact but only just and soon we were glissading our way down to French Ridge hut.

The French Ridge itself was character building to say the least, nobody told me that the tramping track was harder than the mountain route! Those vegetables in the pack didn’t help. Neither did the rope. And that tent. The French Ridge broke us all and we were thoroughly ruined by the time we reached Aspiring hut. We cooked up yet more food with fresh ingredients – this is getting ridiculous, can I please just have a freeze dried?

Nick and Elisabet were planning to stay at Aspiring hut for a few days and just unwind, so the next morning congratulations and farewells were said and I walked out to meet Shauna and Sophie at Raspberry Flats.

Needless to say I was very surprised to see them again in just a few hours when they arrived at our campsite. Apparently the DOC warden at Aspiring hut was very excited – “I get to use my red pen for the weather update today!” – and sensibly they decided to get out before the weather trapped them at Aspiring Hut for New Year’s Eve.

Nick has, as usual, done an amazing job of capturing the day in a video: