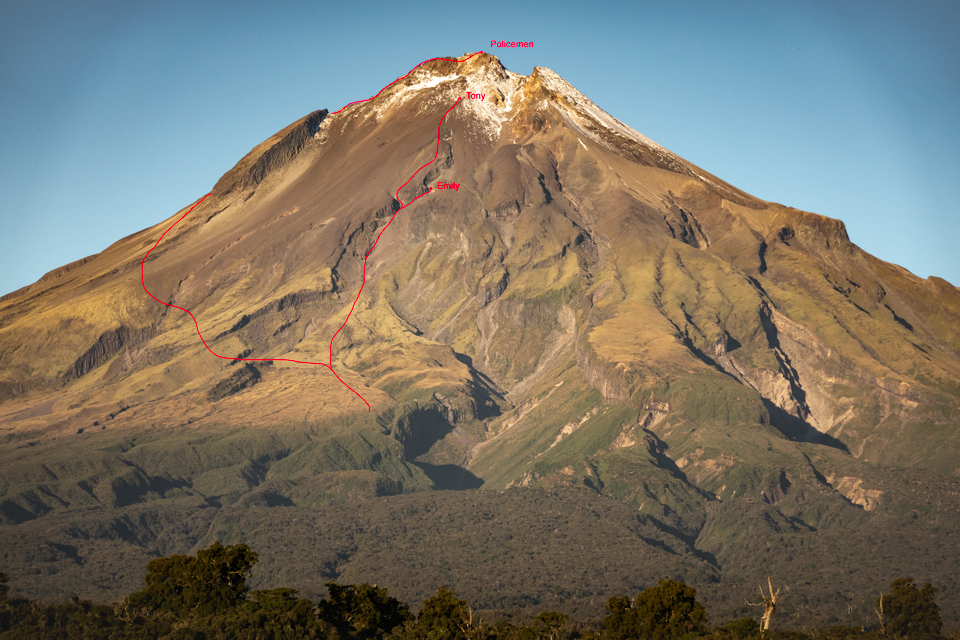 The policeman standing at the end of the track asked me, “did you see any pink ribbons?”  And then immediately said, “I hope you didn’t try to climb to the summit from Kahui Hut.”  When I answered with the second ‘yes’ he scowled.

A few weeks previously Emily President had led a club trip to the west side of Taranaki with the idea of getting to the top of the mountain. We made a reasonable effort given none of us had been there before, and as we had limited route information we had just sort of made up the trip as we went along. We didn’t make the summit but most of all we had a great time and went home wanting to come back sometime soon.

Now there was a forecast midweek for two days of fine calm weather and as I had nothing important to do at work I couldn’t resist. I drove up to the mountain in the morning and then spent the afternoon walking past the hut and camping high in the delightful alpine meadow above the bush. It was a beautiful sunset and then at night the nearly full moon rose over the shoulder of the mountain lighting the landscape below, and it was calm and peaceful.

I left next morning at dawn and was soon just below our previous high point. Here I climbed the scoria through a gap in the cliffs on the north side of Okahu Gorge—a route we had considered when with Emily. Clearly a lot of rock fall comes through this gap—the smudge in the scoria is plainly visible from the road. But it seemed quiet enough at the time and I was soon on the slopes above the gorge.

At first I made reasonable progress—if it can be called that when climbing hideously loose scoria. But the higher I went the worst things got—the scoria gradually turned into the most diabolical stuff I have encountered anywhere on the mountain. Not only was it the usual two steps up one back kind of stuff but it was unstable and completely unpredictable. Reach out to a boulder for support and it would likely take off down the slope in big bounces and a cloud of dust. One footstep would hold while the next would slide away and down the slope you went, walking pole scrapping in a desperate attempt at braking. Mr Taranaki was showing me a side of his personality I hadn’t so far been aware of.

I continued on hoping the slope would improve—but it didn’t. It was now so hopelessly impossible to make any real progress even with exhausting effort that I couldn’t help laughing out loud at the ridiculousness of the situation—I clearly couldn’t sensibly even try to go on because even if I did somehow make the top how was I going to get down this treacherous stuff?  And just to make the situation more surreal dozens of stones had now started ricocheting down the slope—presumably released from the ice above which was melting in the morning sun. Most kept low to the ground sending up puffs of dust with each bounce but the odd one went flying by at terrifying speed airborne at head height.

This wasn’t fun anymore – and I still had the band of frozen scoria above me which had formed in a recent snowfall and which I had always been aware may be too dangerous to cross. So I headed down. I sort of glissaded—hoping to be able to stop when needed. Then I looked up the slope for any flying rocks coming my way and moved aside if needed—then repeat. I made the top of the gap but was nervous about heading into it as all the rocks were funnelling through here—and there was an almost continual fusillade now. The only way was to wait for a lull then run down the slope to the shelter of the cliffs. Relived to be comfortable again I sat down for an early lunch and to enjoy the view.

I wandered down to my tent, had the last of my water, and lay down in the soft grass in the warm sun.  It was simply too nice to leave but as I had no food or drink left I eventually packed and headed back to the road to be surprised by a police officer standing next to his car.

It turned out he had dropped off two SAR personnel who were looking for a young male person who had wandered off from a nearby eco-gathering to ‘search for rainbows’ as it had been reported to the officer. He was bored and I had nothing special to do so we talked for a long time—which was great for future trips here. It turned out he knew almost everything there was to know about the mountain—including that it was stupid (I could totally agree) to go the way I had to the summit, given the unstable nature of the slopes high on the western side, and that he had been involved in a few chopper rescues of people getting stuck up there.

He told me of the way he and his mates had taken to the summit from the hut and although it cheats a bit by heading almost to the northern slopes for a while it makes a lot of sense and is a definite possibility for a future club trip.

So anyway it’s now certain that I will never be going up the Okahu Gorge again in summer — but one other thing that is certain is that the final chapter of Emily’s West Side Story has yet to be written.

P.S.  And the pink ribbons? Turns out the eco-wanderer had walked 10 minutes up the track and then had been led astray by the long pink tapes marking a trap line—had I seen them and where did they lead? He had followed these until he was hopelessly lost and eventually called his mum on his mobile for help. Apparently he was found safe and well by SAR a while later.

2 thoughts on “Taranaki West Side Story – the missing chapter”