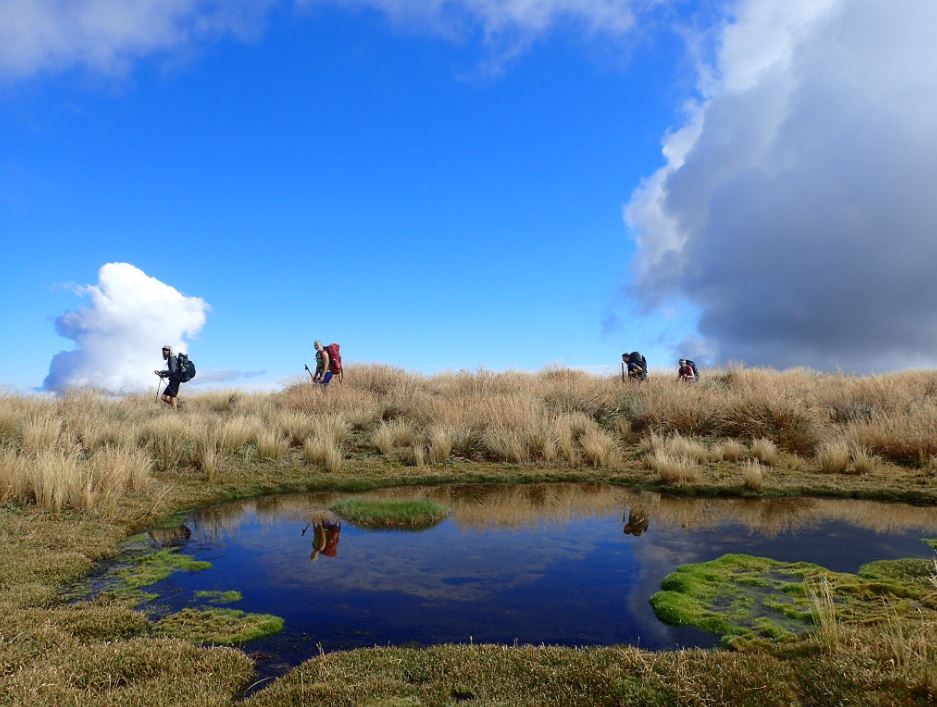 Trampers were offered up one last golden weekend at the end of March, before being plunged into the darkness of daylight savings. Tereza, Mike M, Tom, Fain and I used this opportunity to bag perhaps the most famous of the “secret huts” in the Tararua Ranges – Snowy Hut.

After some rental car difficulties, which our devoted President swooped in and rescued us from, the team arrived late Friday night to Otaki Forks. Feeling a bit guilty for having wasted all our daylight trying to pay for the rental car, I instructed the team to go at their own pace up to Field Hut. Mike and Fain zoomed off ahead, Tereza disappeared not long after, and I was left trying to keep Tom in my line of sight. Funnily enough, everyone was trying to keep up with the person in front of them, which meant we all arrived at Field Hut in under 2 hours. We found the hut occupied by only three people, so spread out in various places for a well deserved rest.

We ambled away from the hut at the leisurely time of 8.30 on the Saturday morning. My companions again set a cracking pace up to Table Top, over Dennan, Bridge Peak and Hut Mound to Kime Hut, arriving at 11.30am. After a confused break (due to a lack of leadership, no one knew whether to eat their lunch or not) we carried on up to Field Peak, over Mt Hector, Atkinson and along the Dress Circle with only a couple of further brief snack stops. The cloud began to consume the route during the afternoon, however beams of rather heavenly looking light snuck through to light up the ridge in some fantastic ways.

At the turn-off to Elder Hut, I told the others to go on ahead, as I really would not be able to keep up on the steep downhill. Here I had the misfortune of rolling my ankle a little bit, which required me to stop for a rest. At just that moment, a ruru with wings outstretched flew down the path straight at me and perched on a branch perhaps 2 meters from me. I pulled out Tony’s camera and began frantically pointing and shooting, hoping to get at least one not-blurry photo. He very kindly obliged and sat still for about 50 photos, before he got bored and flew away. Wobbling on a bit I caught up with Mike, who had been keeping an eye on me at the back throughout the whole trip. He had found a good launching point for our journey down spur 666 tomorrow, about 10 minutes walk from the hut.

Mike and I arrived at Elder Hut at about 4.30pm. The others had already been there for at least half an hour. Elder Hut is a very cute little hut (but the mattresses are a little mouldy). I dumped my excruciatingly heavy WTMC journal on the book pile (noting there was already one there from 2017!) and spread out on the deck to relax. We had an easy meal of Moroccan couscous and Tom produced the most well-wrapped Tim Tams for dessert that we had ever seen. He tried to justify his excessive use of tin foil but it made no sense to us, and we happily made fun of him for the rest of the night.

We roused ourselves before 6am the next morning, knowing we had a big day ahead. By 7am we were leaving the hut and at 7.15am we were stepping off at Mike’s launching point from the day before. Travel down the spur was slow, as the shape of the spur required taking short and frequent bearings. However the terrain was good, and most of the time there was a decent ground trail to guide us down. Mike’s experience navigating showed, although I am pleased to report that we all participated in the navigation (even me, if only to shout out random heights at random times!) Tereza did the route-finding almost the entire way down. I did try and go ahead at one point, but this was on the flat of point 666, where the shallow ground soon meant I was veering off course. We had our eyes peeled for ribbons after point 666 that might lead us down to Snowy, and while we came across the odd pink one, we found nothing indicating the right hand turn we needed to take down to Snowy. In the end we just made a decision to veer off the main spur and descend as best we could. While very steep at first, Fain soon stumbled on a pink ribbon trail that led us straight to the hut. By 12pm, we were having lunch in the sunshine by the river at Snowy Hut.

Given the lovely weather I made an executive decision that we would walk out via the river, rather than retracing our steps back up to the spine of the spur. I soon regretted this decision as I fell in at the first crossing! The travel was slow (and even slower after another fall where I bumped my head), but the river levels were low and we found good little short cuts across the banks on either side. There was only one point, not long after the confluence of rivers at the bottom of spur 666, where we had to “swim” (or thrash about in my case) for about 2 meters and then feel our way along the rocky sides of the true left of the river until our feet touched the ground again. Tom very ably helped me through this bit, and I was overcome with a fit of giggles at the silly squeals and faces people were making as the cold water reached previously dry bits!

After over 3 hours in the river, we came up to Waiotauru Forks where the next obstacle was figuring out how to get up onto the track. Tom and I blindly followed Mike up a steep and vine-covered bank, which took a ridiculous amount of thrashing about to escape. Once on the track, we discovered that it wound back down to river level, only about 20 meters down from the corner we struggled up. While I desperately wanted to pin the blame on Mike for this, he did warn us that there was probably a better way…

Once over the bridge, speedies Fain and Tereza zoomed off down the track, while Mike and Tom proceeded at a slower pace, possibly to keep an eye on me after my bump on the head. Mike stopped at various points to show me where we were on the map, figuring it out with only his map and compass – a professional navigator! We stumbled out onto the fenceline track and the road end at about 6.30pm. Fain had been there for *hours*, and in fact had finished his dinner by the time we arrived!

I was really proud to knock this one off, as it had been on my “hut bucket list” for a while. I could not have made it without such an able group. All of them showed me up in terms of navigating and route finding, and looked after their wobbly little leader without complaint!

1 thought on “Snowy in the Summer”