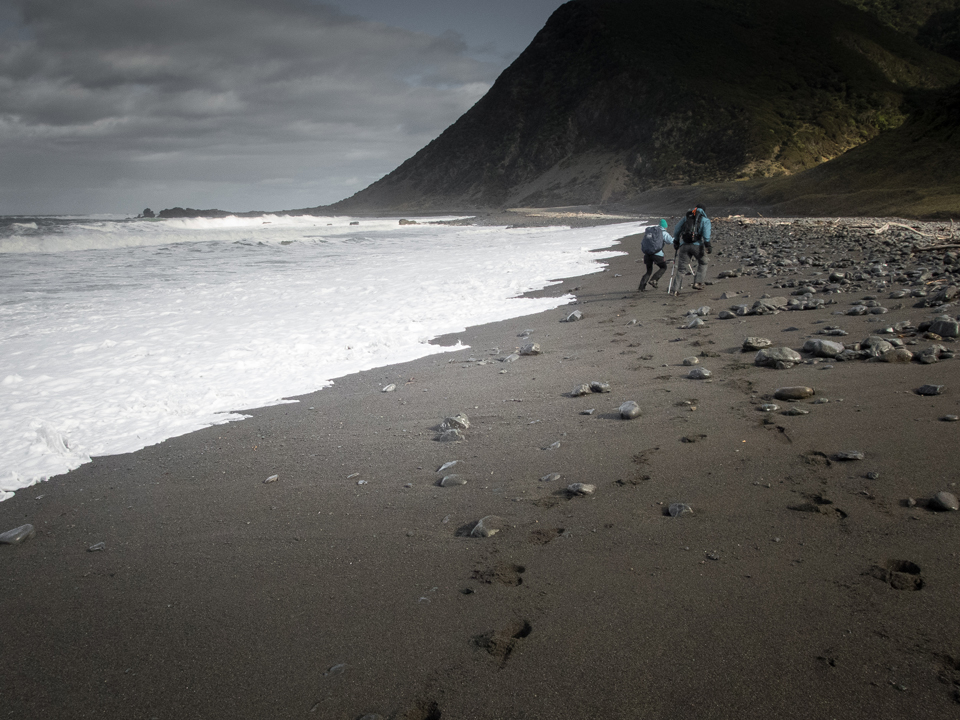 As we climbed up to Mt Matthews’ South Saddle, I found myself thinking of Aesop’s fable The Hare and the Tortoise.  ‘Slow and steady; slow and steady’.   I did my best to keep an even—but what seemed like sedate—pace.  It was a change to how I would normally climb a hill with just a day pack.  I knew I could go faster and get to the top quickly.  However Tony did well to reassure his two sidekicks that a slow and steady pace on ascents on a long day would see us last, and result in something left in the tank at the end of it.

We started along the Orongorongo Track at 0700 hrs.  The weather left a lot to be desired—it was overcast and raining.  Tony imparted good advice around the need for flexibility and acceptance that plans sometimes have to change.  Following some collaborative discussion when we got to the river, we decided we would abandon Plan A which was to head up to Tapokopoko, down the Tapokopoko Stream, up to Mt Matthews and back down to the Orongorongo River.  Instead we would take Plan B a more direct route to Mt Matthews before returning via the Orongorongo River.  So up river we went, in the rain.

The track junction for Mt Matthews is well marked with giant-sized orange triangles in the centre of Mt Matthews Stream.  Shortly after entering the wide mouth, we veered off to the right and entered the bush to make our way up.  Slow and steady; slow and steady. We soldiered up the spur—at one point under a bombardment of hail.  Given the hail and the cold southerly gusts that increased as we gained elevation, we made a further change to our itinerary—Plan C.  Instead, we would stay low and head down the Mukamuka Stream to the coast rather than continue on up to Mt Matthews and its North Saddle.

As we traversed across the hillside to the South Saddle, I for one was hoping for some remnants of the previous day’s snow to be waiting for us.  Unfortunately, any snow that had fallen during the last 36 hours had melted away.  However, reasonable views to the north, down to the Orongorongo Valley, and to the southern coastline, were there for us to enjoy despite the dismal sky.

We soon found ourselves in more sheltered conditions once we started our descent down the headwaters of the Mukamuka Stream.  (The contrast of the width of the river’s headwaters to what we were going to be walking down a couple of hours later was quite pronounced.)  A trip down the Mukamuka is well worth it.  The upper reaches are easy to climb down with plenty of vegetation to help when needed.  The erosion as the valley starts to widen is varied and somewhat different from other rivers. On one bend was what appeared to be a vertical stratum line.  Deadfall was minimal.  But there was a lot of fording until we reached where the river widened at the junction of the Tapokopoko, Mukamuka and Hinakitaka Streams.

Rough seas in the form of impressive large roller waves and a strong southerly greeted us when we reached the coast.  From there we made our way south to Windy Point, along to Fisherman’s Rock (where we enjoyed a second lunch break) before heading further along the coastline to Turakirae Point.  The coastline track is an easy walk sandwiched between farmland on the lower slopes of some big hills and tumultuous waves.

We reached the mouth of the Orongorongo River shortly before 1600 hrs with another 10 kms of walking back to Catchpool carpark ahead of us.  However, Tony suggested a bit of Nav practice and a more attractive route than the Coast Road could be in order.  We could head up the Orongorongo River, up over Cattle Ridge with a final drop back down to Catchpool.  Toby and I were up for it.  So back into water we went (the boots and socks were still wet from the Mukamuka).

Part way up the Orongorongo River Tony offered some unplanned river-crossing instruction.  Given some sections had a current faster than a swift walking pace, and the water being unclear and me not that much taller than Bilbo Baggins, I very much welcomed the offer.  The three of us linked up and crossed the river at three or four of the deeper channels.  What a difference it was crossing as a group (albeit only three of us) than what it would have been for me on my own.

As if we had not had enough walking for one day we took a short detour to the Baker lookout.  The night sky was impressive.  We spied a satellite as it passed through the Southern Cross and marveled at the Milky Way.  But as many good things come to an end, it was soon time to head back down to civilization. So via the Butcher Track we returned to the Catchpool carpark 13 hours after we had left it that morning.

Did Toby and I find the slow and steady pace on the ascents help with endurance for the day?  We certainly thought so even though we had clocked up 44 kms on our feet. Despite being ready for a sit down once back at the carpark, we could have walked further had Tony not have been able to wave open the gate barrier at the park entrance. (Thanks to Richard for that part of the day’s logistics.)

It was good day out for three keen trampers wanting to add to their fitness.  As a day trip, it made the purpose of the training particularly effective given we were able to carry just day packs.  Thanks to Tony for leading and Megan for organizing the two groups for the first Alpine fitness training day of the season.

The  comments to this story discuss access from the Baker Track to the Butcher.

Below is topo map of the area concerned with the Remutaka Forest park boundaries overlain. So the track up the spur from the Orongorongo River to point 376 is on the boundary and all OK. The 4WD Baker Track north is likely to be on the boundary (making allowance for misalignment of the map layers) until you reach the pine forest (where the track is shown emerging from the small piece of forest park is also OK. But from here you need to follow the eastern-most edge of the pine forest north east and continue to the furthest pointy bit north where the pine forest touches the Cattle Ridge Track.

If you do that (or the equivalent in reverse) you should be entirely within the Remutaka forest Park and won’t encroach on any private property.