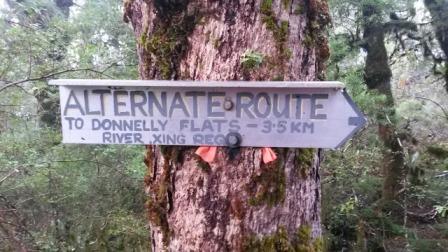 This is the soggy tail of an overnighter-turned day trip. The plan: Donnelly Flats, Pinnacle Ridge, Baldy, South and Middle Kings, Mid King Biv, South Mitre Stream, the Pines and over the ridge to Holdsworth Lodge.

The weather is glum for a 7.25am kick off. I’ve picked a handy looking spur below the first marked gorge on the Atiwhakatu Stream to gain Pinnacle Ridge.

Although not marked on current topo maps the ridge clearly has had a lot of traffic over a long time. The trail is clear with markers of varying antiquity, including some beautifully handcrafted signs indicating the saddle to Pinnacle and a route down to Atiwhakatu hut.

Progress is much quicker than expected, even towards the Baldy end where it is evidently less travelled.  At 0950 in the saddle it’s time to contemplate the grind upwards.  At this rate, the possibility of getting back to the car tonight is on the cards – let’s see what the tops are like.

The track here is benefiting from a DOC trim – recently given the state of the fern fronds and astelia blades littering the ground.

At 1025 the bush gives way to the tops; a chance to pause, grab a bite, break out gloves and have a look around.  A steady drizzle is falling and the view drifts in and out as the surrounding clag comes and goes. The southerly is forecast for later in the afternoon but it’s plenty miserable enough even now.

It’s not so bad though as the ridgeline far above providing some shelter from the norwester. Visibility drops and without a view there’s nothing to do but put the head down and plod on up.

At the ridge, the wind is delighted to gain unrestricted access to my left ear and glasses lens. However, it’s not strong and it’s not far to skirt below South King and through the lumpy saddle to Middle King.  The wooden sign to the biv is welcome.

The rain and wind suddenly fade as soon as the ridge is behind – the clag – not so much.  The ground trail is a little less formed than I am expecting but the spur is obvious. Near the bushline an orange triangle down to the right marks a trail along the bushline which eventually ducks beneath the trees to follow a marked track to the biv.

The cheerful orange hut is in a delightful bushy spot. Nearby, a branch of Baldy Creek cascades from the basin above.  It would be a great place to wake in the morning and I almost regret that I’m not stopping for the night – but at 12.25 it’s a little early.

The biv is looked after by a bunch of ex Forest Service workers who are quite rightly keen to let everyone know that it is in good nick because of their conscientious efforts.

After lunch, I follow the triangles back to the bushline and up to the spur where a strong ground trail leads downwards.  There are sporadic pink tape markers and, once I get my eye in – more frequent rock markers.  Around 800m and below there are places where it is not so easy to find as the spur face flattens or splits, but by keeping an eye out for cairns and tape and half an eye on the compass it’s pretty straightforward.

The trail crosses Baldy creek near the confluence with South Mitre stream which is vigorous enough that I don’t fancy following the stream bed.  Trails come and go on the true right until I’m forced to cross just before the swingbridge to Barton track.

Three chaps from Wanganui Tramping Club are at Mitre Flats hut for the weekend having come up the Barra track.  It’s about 0215 so still too early to stop for the night.

The log book indicates we are the first visitors in 2 weeks – I find this hard to believe but have noticed before that despite its size and location, this hut doesn’t seem to get a lot of visitors.

What with a bit of a chat and filling in the log book, 20 minutes have drifted away before I follow the Barra track down river.

A little over two hours later I’m approaching the road end (the Pines) and plotting my next move. It’s almost 5pm and already getting dim.  To cut a somewhat … trying interlude short … I end up struggling through gorse in the pitch black to the ridge line near Winzenburg Hill with the southerly making its presence felt.  Over the ridge the bush is more open – with no visibility I just head for the nearest stream.

A trickle of water gives me a route to follow without having to think too hard. The rich humus and rotten wood makes travel more interesting as does the odd weta hanging off the log I want to grovel under.  A final indignity is a branch taking advantage of a momentary distraction to flick my glasses off into the darkness. This is more than somewhat aggravating but dismantling the rotten branches in the streambed from a distance of six inches eventually sees us reunited.

At the mouth of the stream I stumble onto a water intake which gives me first a pipe then a trail to follow a surprisingly long way to some water tanks then some DOC sheds and eventually the car park.

All up – a wonderful wee loop trip apart from the last bit. Probably better done as a two-day trip returning by finding a way from the Barra track to Pt 800 then Pinnacle.