Note to the Committee:

I feel I must notify you of a conflict of interest I have, as myself and others have formed a new club that inevitably will compete with the WTMC.  A group of us have had a flash of insight that there is a totally un-serviced need in the tramping community, and that is how the Wellington Alpine Naturists Group was born.  This seemed like a great idea at about 10pm at a beer tasting event, and in rapid order we had many founding members and a full WANG committee was formed.

I must further inform you of our inaugural trip, which was a great success, although it did not strictly achieve our founding aims since everybody seemed to stay very thoroughly dressed. 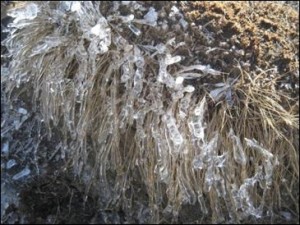 We started by surreptitiously tagging along with a WTMC group – one of the three family trips to Ruapehu Lodge that are running this year.  Saturday morning we left a happy, bubbling Lodge full of children getting ready to sled, ski and board, and drove off down from Whakapapa.

We called in at the DOC office to find out that while last week there was snow all the way to the bottom of Tongariro, the torrential rains of the last week had washed most of it away.  Ice in the craters but washed off the slopes seemed to be the recurring theme.  So we packed our crampons, tied on our ice axes, and set off from Mangetepopo.

I’ve only ever done the crossing wi 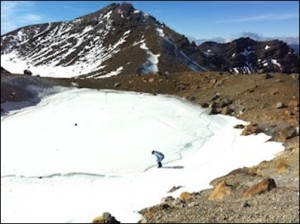 th the masses in summer, so found Mangtepopo road end eerily empty.  No full car park, nor steady shuttling of buses and large groups of tourists and walkers milling around.  Just us and maybe 5 other people.  Strangely, we all started with many layers of clothing, somewhat counter to our Naturist ideals.  Perhaps the biting wind and cool temperature had something to do with this.  We started off on the gentle walk through the Mangetepopo valley with ice all around.  Beautiful ice crystal formations grew out of the dirt like jewelled spines.  The grasses were covered in delicate ice casing.  A stream running beside the track formed sculpted shapes where the water splashed and trickled over rocks and down gullies.

At soda springs the grunt up the hill began.  We still had seen little or no sign of snow – only the chill in the gentle breeze told us it wasn’t a pleasant summer’s day. But when we topped out in the first crater, the white stuff made its presence known in the form of quite patchy snow and ice.  As the DOC office lady had predicted, the rain had washed snow into the crater and frozen.  I untied my ice axe, more in hope than necessity, but although things were a little slippery in places there was no thought of strapping on crampons.

In very little time we’d climbed the spur to the top crater.  The wind was fresh and chilling but the tops were sunny and quite pleasant.  We crossed and picked our way down the other side through the steep scoria.  No snow, no ice, nothing but loose, sliding rubble.  We slowly and carefully descended to the emerald lakes. Emerald in summer, icy white in winter!

We lunched here in the shelter of a rocky outcrop, absorbing the sun like lizards.  A couple of us gingerly made our way onto the lake and tapped at the surface with ice axes.  The lakes seemed very solid – but we didn’t push our luck.

We carried on through red crater, the third of the four big craters.  This was the snowiest part of the journey, with good cover over the entire floor and a slushy, icy exit to Blue Lake.  Blue Lake was truly spectacular as a large white expanse of ice.

We sidled around the edge of the lake and began our descent, to spectacular views of Lake Rotoaira with Taupo in the background.

All too soon we left the snow behind, and ice and rock gave way to mud and gravel.  The track to Ketatahi Hut was showing a lot of damage with washouts and great pieces of wooden edge pulled loose and fallen down the hill.  I always find the descent to Ketatahi Hut interminably long and today was no exception – the track wound back and forth and the hut grew closer in agonisingly small increments.  But soon enough we were chomping on afternoon tea on the porch.

The interminable track carried on from the hut to the beech forest, which is a pleasant finale to the day.   Before long we were met by our driver with welcome cold drinks and were loaded into the car to return to the lodge, to hear excited stories about a great day in the snow.

I’m happy I’ve done Tongariro Crossing in the winter.  In the event it was pretty well like a summer crossing – we didn’t need to utilise our snowcraft skills at all.  But it was superb to experience the crossing like it must h 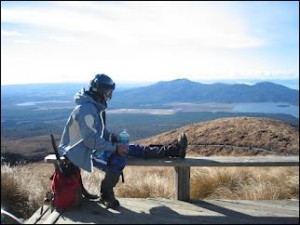 ave been before the rest of the world discovered it – peaceful, tranquil and deserted.  Tongariro feels like an otherworldly place so much more when it’s not scattered with other walkers.

Of course, 10 days later Tongariro did its thing.  Returning two weekends later for a Whakapapa Ski weekend (and the second Family Trampers weekend) the sour smell of sulphur was in the air and clouds hung dark and foreboding over Tongariro and Ngaruhoe. It’s quite special to think that we were one of the last people to cross Tongariro for probably quite some time.

If you have done the snowcraft course and know what to do with crampons and ice axe, The Crossing in Winter is definitely a trip to do.  You’re still on a well formed track so even with more snow and ice, it should be pretty good going, the scoria descent possibly the only tricky bit.  Definitely a good side trip if you are on the mountain but want a break from Whakapapa.

And the future of WANG?  Well, it has its detractors, with their “hypothermia waiting to happen” this and “sunburn in terribly sensitive places” that.  Any innovation always has haters.  So if you have been seeking clothes-optional trips above the snowline, you now need look no further…