The planned trip had initially been to go into North Ohau Hut via the Mangahao River. However the forecast for the weekend was not so good. So plans were altered to a less weather dependent route for North Ohau Hut via Deception Spur. The contingency if the weather was really terrible was to go up to Te Matawai hut on the Gable End Ridge track. So there were quite a number of possibilities when we left the train station on Friday night. 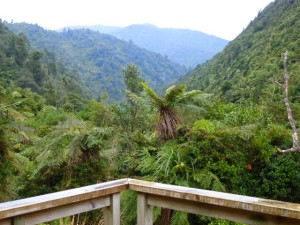 Once we got to the Poad’s Road end there was only a slight northerly so the tramping conditions were pretty much perfect. It took a little over an hour to reach our camping site near the Ohau River.

In the morning the conditions were largely the same (warm but overcast with a good chance of rain) so we quickly packed up and were walking again by 7:30am. Our initial walk took us up the Ohau to the fork between the North and South rivers. The route up Deception Spur starts almost right on the point of the fork and is a very steep bush bash at the start. We got caught in the occasional bit of bush lawyer but eventually the notional track cleared out into an obvious track up the spur. 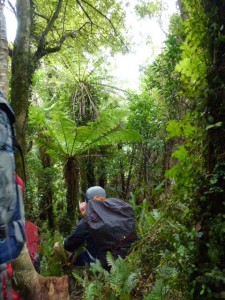 After an hour or so of undulating track we made it up the spur to point 865 – a big decision point! Either we went northeast and up to point 897 and down to North Ohau Hut or we veered South and went over to Girdlestone Saddle for Te Matawai Hut for the night. The weather looked reasonable and hut bagging motivations prevailed so we headed for North Ohau.

Once at point 897 and after a quick lunch, we headed down the hill following a pink ribbon trail. There was some intense bush bashing at times and the ribbons were sporadic in parts so it was often a case of following instinct. It took around one hour before we saw the hut log drop followed quickly by the hut.

We had arrived at the hut just after 2:30pm which could have been problematic as there isn’t often much to do in the hut. The weather had regressed into some gentle rain so that made exploration of the surrounding area less attractive. The hut book had also just been replaced so we couldn’t do much research about escape routes should the rain get far heavier. Luckily there was a decent magazine collection to keep us occupied and the warmth of the fire meant napping became a desirable option. 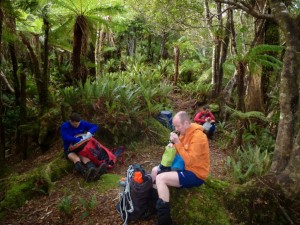 There was some discussion about escape routes with the weather closing in further and was raining heavily (the normal route being river bashing back to the forks). The most obvious option was to head up a spur across from the hut. We decided to leave it the morning as the delicious chorizo pasta that WeiMin and Debbie had created was ready. This was followed by a desert of custard and ginger cake. This totally satiated the group and, with the now sauna like hut, everyone was thinking of sleep.

The rain eased over night so we were able to depart down the river as normal. The water was groin tingling cold at points but not too deep. There was quite a lot of boulder hopping broken up by the occasional river terrace. It took little over an hour to return to the river forks at Deception Spur where we had been the day before.

We retraced our path down the Ohau River to a strange shelter slightly hidden on the banks of the river where we stopped for snacks and lunch (snunch?). There were a few theories about what this was used for (mainly illegal crop cultivation although I am pretty sure it is the site of an old hut).  The structure appears to have been upgraded recently with a PVC frame and tarpaulin. It makes for a nice retreat from the rain.

After leaving the last bit of the track was again very straight forward and we were out to the Poads Rd shelter in about an hour. We had finished by approximately two o’clock and had the time to stop for a deserved coffee in Levin before the drive back to Wellington.