Friday night saw our group doing an extremely quick march to Atiwhakatu hut after which I declared there would be a mutiny the next morning if we were walking that fast the rest of the tramp as my pack was stuffed full of an abundance of warm clothes. We arrived there around 9:30pm to find only a couple who were “glamping” (tramping in style complete with wine, material napkins, etc.) but another party from Wellington, who we had seen at our dinner stop in Carterton arrived a while after us as well. 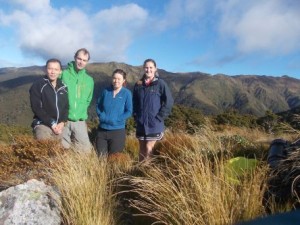 On Saturday morning we were greeted by a few guys who had come in that morning walking their dog which was very excited and full of energy (I think most of us were hoping we were feeling the same!). We headed off on the track towards Mitre Flats hut and made the turn-off to Baldy at the junction after a short, sharp climb. From here it was a long slog up to the bushline where we stopped to take in the view since the Tararuas had given us a treat of perfect visibility. Directly opposite us we could just make out Jumbo Hut where we were ending for the night. It certainly looked a long way by the route we were taking……. 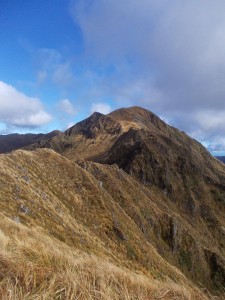 From here we trekked up to Baldy and South King. We were now battling a cold and extremely ferocious wind that was going all out to knock us over – don’t be fooled by the photos I took which make it seem like a lovely and warm sunny day up there! I can assure you I was completely frozen and at that point was thinking longingly of being back in my much warmer home. But where’s the adventure in that?? On the bright side being so cold meant it didn’t hurt so much when I was continuously being spiked by spaniards. Maarten found the most sheltered spot to layer up with more clothes and we had a very hurried lunch before we all turned into human popsicles.

Once at the top of South King and wandering along towards Broken Axe Pinnacles we were finally out of the wind tunnel we had been in. The other Wellington party were doing the exact same route as us today and we watched some of their party climb to the very top of the pinnacles just for the sake of it while we very sensibly scooted around the base of it. We passed through the junction to McGregor Biv while Jessie and Maarten told Fiona and myself about all its wonderful facilities such as the private spa pool outside (aka an extremely cold tarn). Unfortunately with the shorter daylight hours and the weather conditions we didn’t get to bag it but I will be back to do that another time. 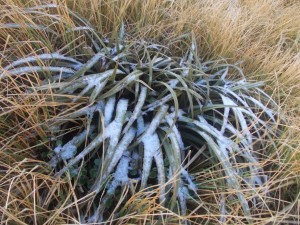 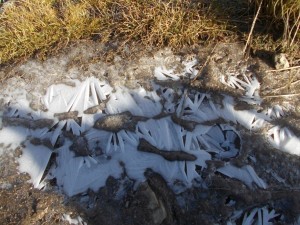 Just before we arrived at Jumbo hut a helicopter dropped off a huge bag of coal. At least we could now all thaw out and wouldn’t be cold during the night! Jessie proceeded to smash us all at Bananagrams which we played this time according to the “Maarten Rules” rather than infamous “Sarah Rules.”

The sunset from Jumbo hut was really beautiful as was the sunrise the next morning. Even with my “hit and miss” photography skills and poor quality camera I managed to end up with some pretty decent photos. 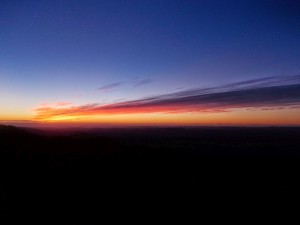 The next morning we were heading across to Mount Holdsworth along the tops. We had a different group of guys doing the same and even though they had left shortly after us, they looked to be catching us up. Our group being full of competitive people started coming up with different strategies on how to slow them down, which got increasingly more outrageous. However, walking fast was really a necessity from the cold wind we were battling again; so with our group speeding along we soon left them in our dust and made it across to the summit of Holdsworth from Jumbo Hut in a sub 1.5 hour time which clearly shows how cold it must have been to make us walk that fast!

Luckily, we arrived at the top of Mt Holdsworth just as a large party of Scouts were descending so we ended up having the summit to ourselves for a quick photo stop before descending to Powell hut for some shelter from the cold wind. From here it was a nice easy walk down to the car-park with lots of bird life around the Donnelly Flat area.