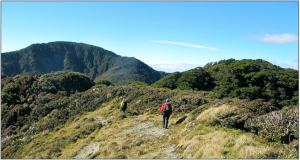 This is not a trip to everyone’s taste. Few majestic views, no clearings for sunshine basking breaks, very limited amenities, scant opportunity for a natter on the middle day and no ‘racking up the miles’ or ‘peak bagging’ for achievement lists. Your gear will come out not quite the same ever again. And with regards to your trip selection, you may wonder ‘why?’ , which the majority of people will certainly do. 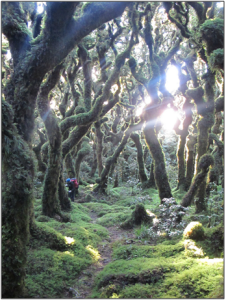 But, if you take to it with the right spirit, you will get a laugh – even if only at yourself.

Eventual goal: head north from Mt Mathews North Saddle to Papatahi from bush camps along the OO river in a day. Well why the hell not?

It was Easter and too much on to go far away and just planning a few days at work. An email from Allen followed with a call on Wednesday – “how about the western Tararuas?”… “Sure”. A call with Allen Thursday – “OOs?”.. “No worries, but I have eaten all my Easter eggs”… “Don’t worry, we’ll find some”.

Friday. All in the car on the way to Catchpool road end – “so what the ? are we doing?”… Allen explained the plan. “Oh. ….. Well good thing I threw in the scrub gear just in case. Where are the Easter eggs?” 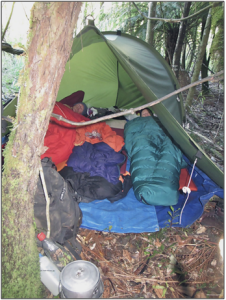 A pleasant stroll in, general wander about sightseeing and night under the fly with a fire at the old Bain Hut site. Some disturbance of the night from stags roaring. And Easter eggs!

The day began with the regulation kick off for these trips with the brew on before sunrise. Good (roughish) travel up to north saddle and then progress slowed…

Goodness me! I was hoping hard there would not be too much of this type of bush – the midriff to head high type that is very hard work to get up through. The bush gained height and opened up over the first bump. And continued the same, varying between slow push through shoulder to head height crud to some good going animal tracks under a canopy. Did not find navigation that tricky, but maybe we got lucky and it certainly helped with it being a clear day and the chance to spy out the route. With nettle and bush lawyer about, gardening gloves and bush bashing kit are the ticket. It also pays to be short on this trip and take the smallest, least snaggy pack you can. 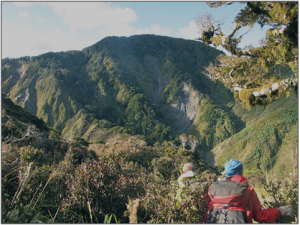 The last climb to gain Papatahi looked interesting, but Allen found a decent sneaky route around that. I was feeling tired by the time we got to Papatahi (or some time before), but the daylight left was limited and we had to make the most of it. So straight down after route discussion on the hoof “East or west? I am after a call from someone.”, “I’m stuffed – lets go west so I can have a lie in”.

We re-joined the OO river and had camp set up about an hour after dark – but dark that descended like a thump as we dropped height fast in to the valley. Some disturbance of the night from possums. More Easter eggs!

Sunday is the traditional day of rest. So rest we did. With a very late lie in and a leisurely wander back to the car park.