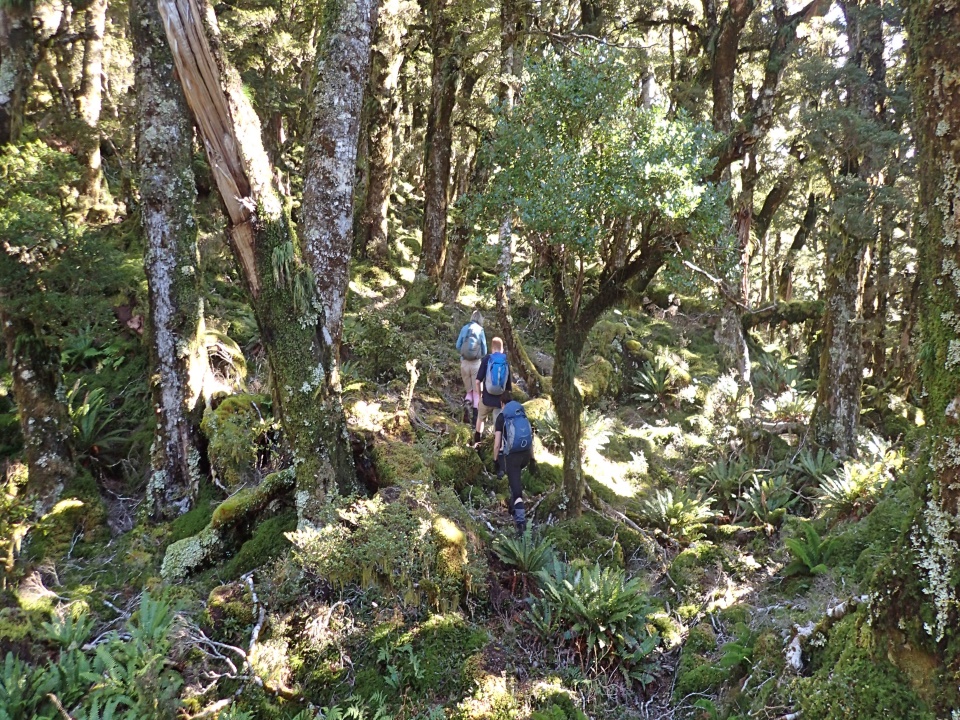 If you go off track in the Tararuas, beware of the enchanting goblin forests.

The morning started with my favourite way to start a tramp, taking photos of amazing mushrooms before crossing a nice swing bridge.

About an hour in we met a couple of veteran club members coming out of the bush to get more peanut butter (for the traps). They were excited to find this was a Tongue and Meats off-track trip and warned us about lots of leatherwood near the tops. Matt said he hadn’t heard that part so we agreed with him there wouldn’t be any.

Marie had given us clear directions of where to leave the path: past the big bridge on the left up the spur. Less than another hour along the path to Atiwhakatu Hut, we passed what we all agreed was a big bridge, except for our leader who had the advantage of knowing where we were going. Shortly after, we came to a bigger big bridge (the 10 person swing bridge), our actual point of exit into the bush.

Following the spur parallel to the creek bed as a good navigation reference, we worked our way through the ferns and other small bushes.

After about 15 minutes Marie reminded us that she’d forgot to remind us to fill up at the creek where we left the path. Not a big deal, about 500m up (!), near 810m, there’d be another small creek.

Shortly after the ground started getting mossier as we entered the classic Tararuas goblin forest. The ground seemed strewn with bright green moss, with large clumps obscuring tree roots and the gaps between them. I soon learnt the trick was to guess which moss clumps were on roots or rocks. Most of the trees that looked tempting to reach for or pull up on were rotten or close to but the branches and roots of the smaller plants were surprisingly solid.

For most of this stretch the going was much easier than we all expected, apart from the odd patches of fallen trees or logs just to keep things a bit more interesting. Going last, it was easy to pick the best route, going first it seemed like Matt and Jaz were naturals in finding a smoother way.

At times it seemed we’d found a walking trail, which I felt was almost cheating. However, after a few meandered into logs or the mosses, we worked out they were likely animal tracks so we could still claim to be legit off trackers.

At the 810m creek where we stopped at the creek for a water fill up and lunch, Jaz was still rating the trip highly.

Marie had been explicit in her pre-trip emails, any breaks would be 10 minutes max. We had an indulgent 15 minutes.

We continued on through the goblin forests working our way through green-cushioned tree roots, and surprisingly for the Tararuas, no mud. Lovely, fantastical, magical!

Another few hundred metres, with a few steeper bits but mostly gentle inclines or soft mossy ground, we started to feel the wind for the first time.  We finally hit the dreaded leatherwood but our trusty leader managed to find ways around most of it – until we left the bushline about 50m later.

We fought our way up against the winds (about 30-40km/h), dragging up on and crawling over leatherwood and the long grasses. This was the off track stuff that the Tararua legends were made of!

About 20-30 metres up we spotted the track marker and found a lee where the wind jackets, beanies and gloves all came out.

Another 20m or so up and we all trunched, pulled or otherwise made it up to the East Holdsworth track.

With the winds strong but at a walkable level we all decided to go back – or more accurately – up (and up) – via Powell Hut. We were rewarded with some wonderful views interspersed with mist, clouds and great practice walking in windy conditions.

About 15 minutes past the Mount Holdsworth trig we spotted the large red roof of the new hut still under construction. Our fearless leader was being lured by the builders in the hut waving at us but we somehow managed to keep her on the right side of the ‘Danger – Do not enter’ signs.

Going back down from Powell Hut, we saw seven people laden with backpacks (including two with sleeping bags on the outside as big as their packs) and two dogs going towards the hut. With 50km winds predicted, and a not quite complete hut technically a ‘danger zone’, we mused about where they might end up that night.

Having maneuvred our way past the scouts on the Gentle Annie Track, we all safely arrived at the carpark with no bruises and all ankles in-tact.

Thanks Marie, Matt and Jaz for a most unusual trip in the Tararuas. The only mud we encountered was a few spots on the track to Powell Hut.  Lots of green trees and greener mosses, only a few goblins, and the odd bat or two (but best not to mention that to Jaz or Matt).