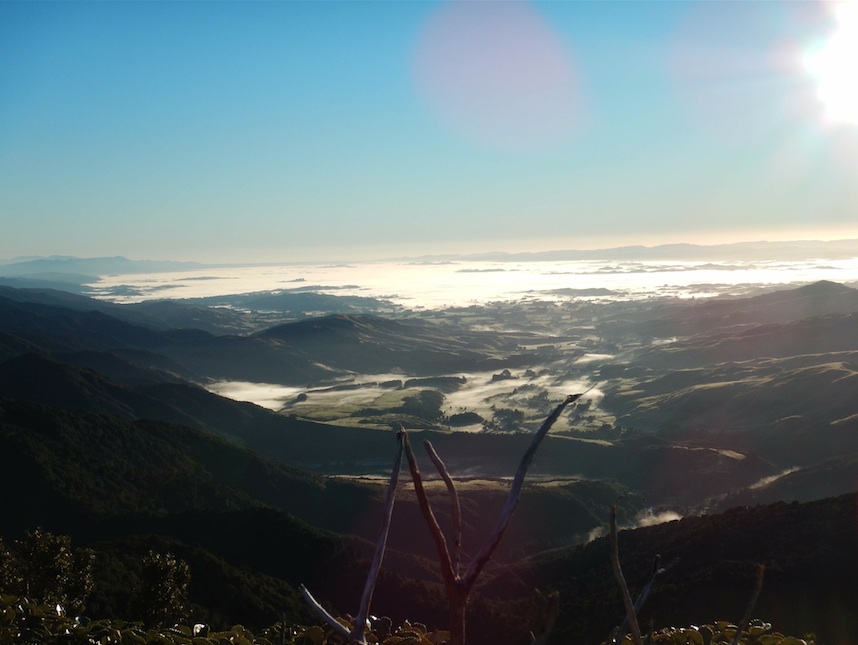 When I put an “SK” on the schedule for Easter weekend, I envisaged four glorious sunny windless days on the tops of the Tararua Ranges. More than one fellow club member laughed at me for such an ambitious trip over a typically mixed bag weather weekend. However, right up until the week before, I was convinced the weather gods would smile on me and make my hut bagging dreams come true.

By the Tuesday prior it was clear my already “short SK” (Putara Road end to Otaki Forks, via Kime Hut) was not going to happen. So I shortened the short SK to an even shorter SK, by coming out via Waitewaewae Hut. I still clung to a dim hope of bagging the elusive middle huts along the Main Range.

Matt drove us to Putara Road end on Thursday night, where we walked the 2 ¼ hours up to Herepai Hut. Matt was not officially part of the trip, but he was very kindly being our transport for the weekend, and also wanted to get a look at the tops during the good weather forecast for the Friday. Apart from a water bladder explosion issue that left poor Cindy’s sleeping bag and jacket rather wet, the trip in was uneventful.

I roused everyone at the ungodly hour of 6am to ensure we could make the most of the daylight. By 7.15am we were climbing up above Herepai Hut and being treated to some of the most stunning views I have had in the Tararuas. Northwards, we could see Ruapehu and Taranaki, and south, the ridges stretched out endlessly. David, who knows his tops well, could point out and name all the main peaks for us. We toddled happily along up to Herepai, Ruapae and East Peak, where Matt decided it was time to turn back.

I know tramping is all about walking up and down hills for no reason, but that silly saddle between East Peak and West Peak threw this into stark relief for me. We immediately descended 200m only to immediately climb those 200m again, and all the while we could see our target of West Peak hanging above us.

I found the terrain from West Peak, over Walker and Pukemoremore and to the turn off to Dundas Hut, rather hard going. The ridge gets narrower and rockier in places (especially around Pukemoremore), and my weak left ankle was threatening to give way at any moment. The others were enormously patient. But it was clear that we were not going to make our target of Arete Biv within daylight hours. We made the sensible decision to descend and stay at Dundas Hut, drink copious amounts of tea and soup, and formulate a new plan.

I reluctantly let go of Dracophyllum and Nichols Huts, but couldn’t let go of Arete Biv, and unwisely convinced the rest of the group to head for Arete tomorrow, and then down to Te Matawai Hut and out via Poads Road end. Although it sounded like a sensibly shortened distance, gale winds were forecast for the afternoon, so we would need another freakishly early start to get along to Arete and over Pukematawai before being blown off the ridge by north westerly winds. I set my alarm for 5am.

Much to our surprise we were joined by 9 other trampers that night, who trickled in between about 8 and 11pm. I was astonished that they had navigated the rocky ridges of Pukemoremore in the dark, given how hard I had found it during the day. I felt rather guilty as they all had to pitch tents or bivvys on the scarce flat ground around Dundas Hut (but obviously not guilty enough to give up my bunk!)

My alarm reliably went off at 5am. Somewhere between awake and asleep, I hit my phone and lay back down, only to wake with a start at 5.40am to Tony shaking me and saying my alarm hadn’t gone off…whoops.

We reluctantly wriggled out of sleeping bags and began preparing for our day ahead in the dark. By 6.45am, we had enough light to set off. Menacing clouds shrouded the Dundas junction, and we could already feel the wind by the shelter of the hut. However, I had mentally committed to Arete so pushed the group up to the junction. Here we sent Matt a text to say that our plans had changed, and could he please pick us up at Poads Road end on Sunday at 5pm. He text back almost immediately to say yes. With transport in place, we popped onto the tops where we felt the full force of the winds. It was hard to balance and hard to hear each other. I led the group on at a snail’s pace for about half an hour before we were again climbing over rocks similar to yesterday. Tony called the group together and suggested that, apart from being rather miserable, wobbling along in these winds over knife edge ridges for the next 5-6 hours probably wasn’t a good idea. Of course, it was an eminently sensible comment, but it meant we had to admit defeat and return to Dundas Hut. And reorganize our transport. However, good sense won the day and we scampered back to the junction and perched just below the sign to send Matt another text to say we had changed plans again, and were now heading to Cattle Ridge, where we would send him an update from there. Thank goodness for cell phones.

The winds improved immediately beyond Dundas Hut. The clouds released us and we saw some blue skies in the East. We happily descended down to the Ruamahanga River, and sidled rather slow and painfully, across to the climb to Cattle Ridge Hut. After a break, Cindy and I floundered around trying to find the start of the track, until David rescued us. The climb is as horrible as it looks on the map, not only because it is steep, but because at least half of it is pushing up through overgrown scrub. Our legs were soon pink with lots of scratches and scrapes. About 100 meters from the top the scrub finally thins out, and gives way to some rocky scree patches. By now we were back up in the winds, so I had to use both arms and legs to pull myself up. Once on the top, I was very glad of our decision to abandon the ridge travel to Arete – the winds were strong enough here.

A few short minutes of northward travel brought us to the turn-off to Cattle Ridge Hut. The track down was a bit ditch-like, but at least we were now out of the wind. Cattle Ridge Hut is a nice hut. It has a “conservatory” where wet gear can be hung, and a fireplace. It also has a well stocked pantry (or “had” a well stocked pantry as certain members helped themselves!) We found fellow club member Andrew sheltering from the winds inside. He had been running around collecting spot heights and covering some incredible distances off track, so was having a well-deserved rest.

After second lunch and hot soup, we left the comfort of the little hut and continued our descent down to Roaring Stag Hut. Although the descent wasn’t too bad, by this time my ankle was aching, so I hobbled along after the group at a very slow pace. By 5pm we were at the bridge and celebrating reaching the safety of our destination for the night.

Roaring Stag was surprisingly empty – we only had four other companions for the night. Tony and I tussled over who would get to cook (and therefore get rid of) their evening meal. I won, although I valiantly allowed Tony to contribute a very heavy courgette. After rice risotto, and chocolate mousse prepared by David, we slipped into very comfortable food comas.

Our final day was an absolute picnic. We arose at 7.30am, had a leisurely breakfast, and wandered along the track back to Putara Road end without a single drop of the forecast rain we had been expecting. Matt was already there when we popped out at about 12.15pm, waiting with chocolate marshmallow Easter bunnys! I felt rather guilty again, making Matt run around after us on his long weekend (but of course not guilty enough to reject my bunny).

1 thought on “A very short and circular “SK””