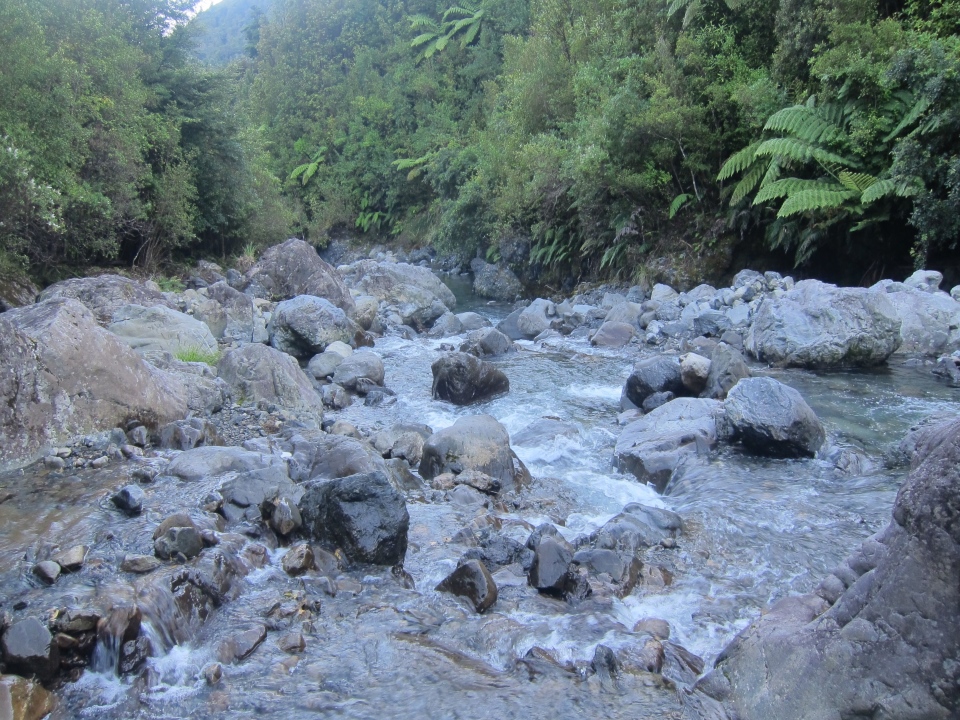 5.45am.  Platform 9.  A large bus load of passengers disembarks their Auckland bus, presumably arriving for that evening’s Eminem concert.  It was a little earlier than usual to be meeting for an overnight tramp.  We were expecting a hot day and decided to tackle the uphill section in the cool of morning.  At 7.35am we began our tramp from the carpark at Otaki Forks.  The morning chill took a while to wear off, but the steady pace up the winding hill toward Field Hut quickly warmed us up.  I had forgotten how good the track is going up to Field.  Barely any roots, rocks or mud anywhere and most unlike the Tararuas!  One of our party suddenly fell ill partway up the hill.  Doctor Tash prescribed some glucose tablets from her magic kit and she was quickly on the improve.

As we made it into the bush, hidden birds serenaded us.  Rounding a corner to see the happy sight of a hut toilet beside the track, we arrived at Field Hut at 10.40am.  It was a sparkling day with very little wind and, amazingly for the Tararuas, views!  We settled down in the sun or the shade and ate an early lunch.  The fattest kereru I’ve ever seen floated on the thermals like a gull.  It seemed to be having a fantastic time.  Occasionally it would drop into its display dive and then settle back onto a nearby branch, showing off its magnificent plumage.

A member of LANDSAR was at the hut and explained that there was a large team further up the hill undertaking a search and rescue exercise.  He had the job of waiting at the hut to ensure the three ‘missing’ people didn’t slip past.  We left Field at 11.30am and headed up to a very dry Table Top, arriving at the Penn Creek junction sign at 12.10pm.  Leaving the junction at 12.30pm, we soon passed a danger sign, stating that the track ahead was full of unstable slips.  We came across two brightly-jacketed LANDSAR members (at this stage they had found two out of three of their ‘missing’ people).  Dropping off the tops, rather steeply, we soon hit the bush line again.  The track was surprisingly good and the steep descent occasionally gave way to a flat section, giving our knees some respite.  The river below roared enticingly, but we never seemed to get any closer to it.  Then, one hour and 50 minutes later, we arrived at the creek, presumably Penn Creek.  It was a lovely spot and we loitered on the boulders for some time, taking in the peace of the place.

It was hard to leave that spot, but 15 minutes later we arrived at Penn Creek Hut (3.20pm).  We hadn’t seen any of the large slips, so presumed that they were on the loop track, which skirts the river back to Otaki Forks.  The 6-bunk hut seemed to be used regularly by hunters, judging by the three dog kennels, meat safe, copious amounts of dog poo and sets of antlers in trees.  There was even a pile of magazines under one of the bunks.

Most of the group had brought tents, so they were set up and then we snoozed or chopped vegetables in the sun.  It was a very hot day, but the creek water was like ice and I wasn’t keen to jump in.  We had a delicious dinner of vegetable shepherd’s pie.  The mashed potato with an entire bag of parmesan and two wheels of goat cheese was divine!  After dinner we flicked through the reading material (not as X-rated as it had first appeared) and even found a copy of The Economist, much to Dillon’s delight.

The next morning we were walking by 7.45am, heading back the way we had come and aiming to get up the hill before it became too hot.  With several stops along the way, including the reemergence of Tash’s magical mending kit to tend to two of the group for wasp stings, we made it out of the bush into the heat.  The fear of wasp stings was an excellent motivator to get up the hill as fast as possible!

There was no wind to cool us down and some of us huddled in the shade of a bush, while we had a break.  Like the previous day, the views were incredible.  You could see the sea and all the other ranges around.

We made it back to the junction sign by 11.00am, walked a swift downhill to arrive at Field Hut 30 minutes later, lunched, then zoomed down to the carpark, arriving at 2.45pm, all the while dreaming and talking a great deal about ice cream.  Just before we arrived back at the carpark we came across a tramper with a lot of hip pain, who had run out of water.  We gave him a bottle, which he downed in seconds, offered more water and tramping poles, but he refused any further help.  We were glad to see him arrive at the carpark shortly before we left.

The intended ice cream destination was Otaki, but we changed our minds when we saw the queue of traffic and instead found an ice cream store in Paraparaumu Mall.  Bliss!  Usually the drive back to Wellington involves traffic backing up on the way into Wellington.  This time the traffic was a crawl most of the way from Pukerua Bay to Otaki – heading out of Wellington.  There must have been a lot of people at the Eminem concert.

Thanks to Tash for organising and fixing us with your magic kit.  It was great weather, a great group of people and excellent mashed potato.  Thanks also to Aimee and James for providing the pics.