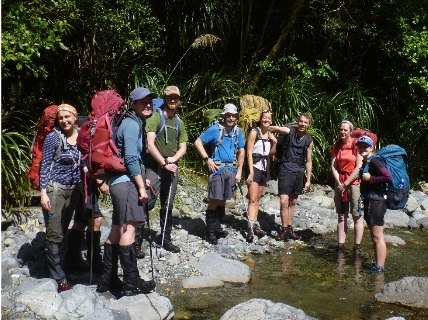 We started out from Wellington station on Friday night with the five of us in the van. After competing with Friday traffic for a couple of hours we had our dinner stop in Levin – spoilt for choice we all went for the same kebab place for a great pre-tramp meal.

When we arrived at the Poads Road end, which is just a short drive from Levin, we quickly got ready and set off. Simon assured us our camp for the night would be just after we got out of the farmland, a short walk of about 15 minutes. One hour later, we found our campsite.

After setting up the club flys, a possum came to inspect our camp, but shortly disappeared once it realised it couldn’t get anything out of the WTMC.

The next morning, we had perfect weather for river travel. Before we knew it, we were at the junction of the North and South Ohau rivers, after some of the quickest river travel you will ever see. The next section to the North Ohau Hut was a bit slower due to some deeper pools and narrower sections. This is not a trip you would want to attempt with high river levels.

We still made it to the hut in good time, so we rewarded ourselves with snacks and refilled our water from the river, as the hut water smelled funky (Matt’s club trip, that arrived at the hut later in the day, discovered why – a rat had found its way into the tank).

The next section, was an unofficial track marked out by pink ribbons, and started behind the hut’s long drop. It turned out to be a pretty good track, with only the occasional tree fall slowing us down, and it got us to the top of the climb (point 897m on the topo map). After a quick lunch we continued following the track towards Girdlestone Saddle. Unfortunately, we managed to lose the track part way, but we decided we could just follow the ridge to the saddle.

We had a few mis-directions after losing the track, but these were quickly fixed by Emily’s expert navigational compass skills. After some slow going we made it to Girdlestone Saddle looking forward to being on an official track again. We had the option of a direct route to South Ohau Hut down the Dowling Falls which looked difficult and steep or an easier route via Te Matawai Hut.

It was a relief making it to Te Matawai, where we had a nice chat with some Te Araroa trail walkers. From there on, it was all downhill to South Ohau Hut, our nights’ accommodation, and dinner – a delicious peanut satay. We had great company chatting with some friendly trampers about our favourite tramping areas, and there was also a group of Duke of Edinburgh students camping in front of the hut. The setting of the hut by the river is perfect.

The next morning it was back into wet boots for more river travel. But we had a day of stunning weather for it. It took some effort to avoid the deepest sections, however most of the river was below knee depth. In a case of perfect timing we met the other club Easy-Medium trip, who were coming back from North Ohau, at the junction of the Ohau rivers.

From there on we were back on familiar ground having travelled this section of river the previous day. We only stopped for a quick swim, before meeting the track again (although it is easy to miss the first marker from the river).

We made quick work of the last piece of track, emerging at Poads Road for an early finish around lunchtime.