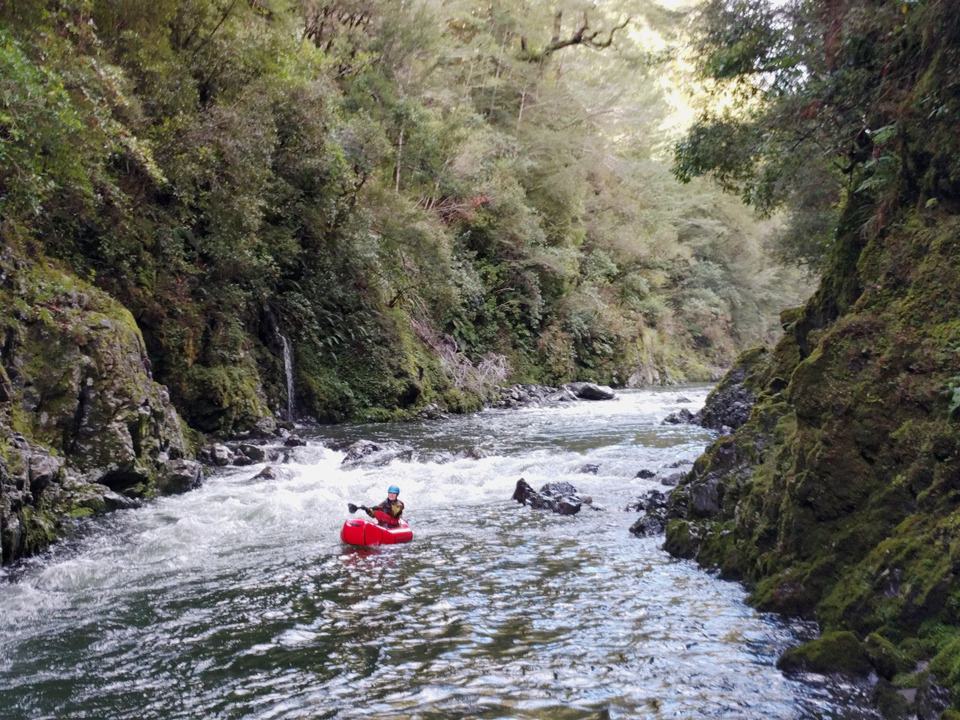 This trip was Marie Henderson’s idea. Walk into Roaring Stag on Friday night and sleep in the hut. Then  packraft down the Ruamahanga River on Saturday to a Mt Bruce exit on the highway. But at the last hour Marie was called by SAR for four days assistance in the search for a tramper missing near Arete Biv.

The remaining punters were still keen but decided sleep was of higher importance than night tramping. As none of us had been down this section of the Ruamahanga River we all wanted to see the water level at Mount Bruce in daylight before departing into the bush. On arrival, the gauge at Mount Bruce was at 7.85 cumecs, which gave a perfect water flow for the group (36 hours prior to us starting our paddle the gauge recorded 56.52 cumecs).

After eight hours of fitful sleep at the Kiriwhakapapa Road end DOC campsite we rose at 6.30 am to drive to the carpark at the start of the Ruamahanga River track 10 km away. We started walking at 8 am along the very pleasant farm and bush trail. Not too soggy, well-marked, and it only rose on the map 100 m in elevation along the 9 km track—although our legs informed us there were a few more accents and descents between the carpark and the put-in at Cleft Creek than that). We often could hear the river, but rarely saw it. The few cliff top views did increase our confidence of Grade 2 rapids and clear water below.

It took us an hour to have a brew, lunch and change into packrafting mode. Andrew was trying a new clothing and raft technique—his 4 mm torso/3 mm leg wetsuit under his drysuit in a packraft with no skirt. Ben went for a similar wetsuit, merino long johns, spray jacket and a packraft sprayskirt. Me, who is always the most likely to be hypothermic, had merino leggings, a sleeveless windstopper vest and a Polartec base layer, and no sprayskirt on my raft. Everyone was happy with their clothing for warmth, two of us taking swims, and Andrew had a personal sauna of sweat with his wetsuit and drysuit combo at the end.

The river level was perfect for our growing confidence in white water. All the Grade 2 to 3 rapids we were able to run without needing to scout. The rapids were numerous, with mostly clear lines and with pools beyond. The drops of up to a metre would cause my helmet to disappear out of sight, un-nerving  the boys following. The gorge sides were narrow and the river fell steadily and there were not many escape routes.  Most of the rapids could be portaged although there were a couple in the gorges that couldn’t.  We all had fun.

Ben had the first near tip 10 m after starting. Perched on a mid-stream rock he filled his raft with water as had not put his spraydeck on properly. Three quarters the way down the gorge, on a line through a rapid, I tipped myself out on the last rock as I leaned towards it too late. Ben passed by said I had chosen the right line as I swam with paddle and raft to the gorge side. Andrew had the most exciting flip. We had paddled the 11 km gorge and all agreed to continue under the road bridge at Mount Bruce for another 3 km. Andrew misjudged the first willow hanging over the river and flipped himself on a log beyond. Ben was quickly in position to help while I stationed myself downstream to catch any floating equipment that might pass by.

We exited the river on the true right and had a 0.5 km farmland walk passed huge native trees to the road. I immediately put my thumb out to hitch and the first car stopped offering to take all three of us the 2 km back to our car. It was 3.15 pm and about to start raining.

A perfect June winter day trip in the Tararuas.