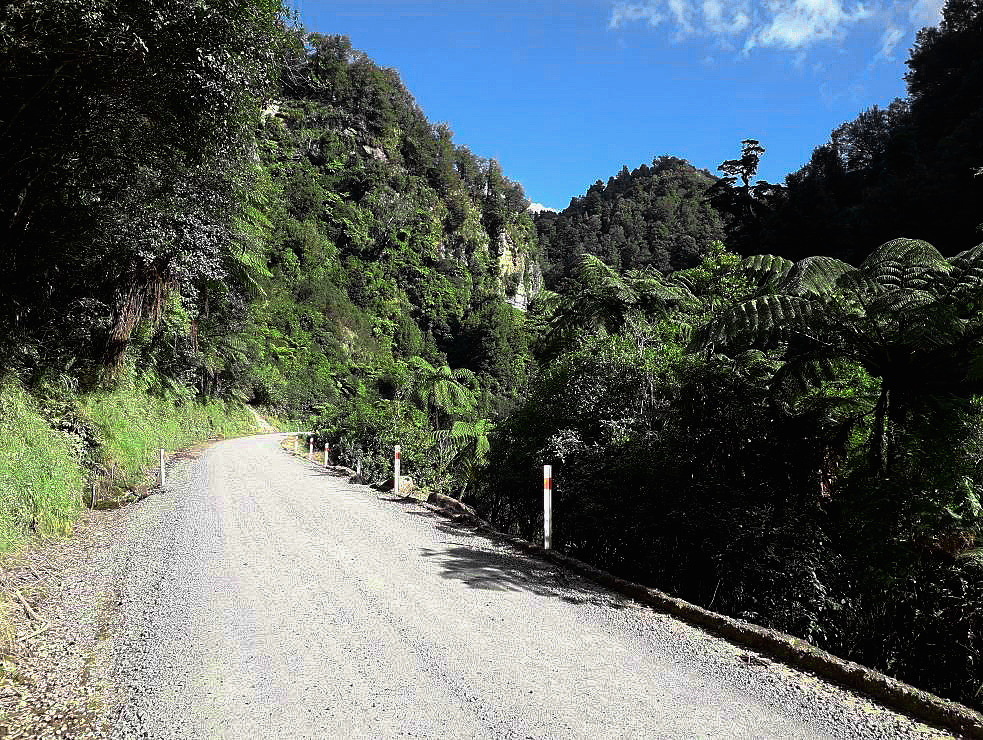 Over Easter weekend I took a trip through and around the Forgotten World Highway, between Taumarunui and New Plymouth. This area is surprisingly beautiful for how little I have heard about it before going, and still relatively quiet in terms of traffic.

As you pass through, there are stunning views of the Ruapehu massif, Taranaki, some ancient indigenous forest, cultivated agricultural land and wonderful vistas of the Tasman Sea.

There’re some hefty climbs in there, but nothing that an experienced bike-packer can’t handle, and always followed nicely by some good vistas and exciting non-technical downhills. The particular route I took was mostly sealed and gravel roads.

The route formed a loop, down the Forgotten World Highway, turning at New Plymouth and then returning slightly to the north, with a bit of highway travel to link to some great gravel back-roads (which I think will be part of the upcoming ‘Geyserland Mega-Grind’ bike-packing event).

The first day is always a little tough, as you’re fully loaded with food and slightly nervous about every corner and how you’ve packed. But I was soon into the swing of things and enjoying the easy-intro of the sealed road at the start of the Forgotten World.

The elevation chart showed me that I had several steep climbs to get through, and it was around 95 km to Whangamomona. So, pacing myself and finding some good tea spots along the way made for a full and enjoyable day on the road.

There’re some interesting tunnels and great vistas too, with the peaks of Ruapehu clearly identifiable in the distance.

The town of Whangamomona is actually it’s own Republic, or so they claim, and at the hotel that night I met the President (formerly a goat but currently a human). He propped up the bar most of the night in his socks (muddy boots outside), and with satisfied rosy cheeks from a few drinks and having completed a bunch of new fencing that day.

The second day was much like the first, again covering around 95km. But the vistas changed to Taranaki and the coast, the road change to mostly gravel, and turning off the highway onto Junction Road (rather than heading all the way to Stratford) made for much quieter travel.

The day ended on the award-winning coastal walkway into New Plymouth, which was greatly animated with people all along and reminded me of the similar urban design successes in Lima.

Days 3 & 4 were much the same, with Day 3 being around 115km and the last day around 60km. The rains came in so there were fewer breaks and more steady progress. There was a bit of highway to get through out of New Plymouth, so I would recommend avoiding that if possible, but otherwise the gravel back-roads were very pleasant with a lot of birdlife to enjoy.

Save some Party Mix and a hot-cross-bun for the Waitaanga Saddle – quite a climb!

The Bed-&-Breakfast in Ohura is a new venture, and a great comfy place to rest for the night.