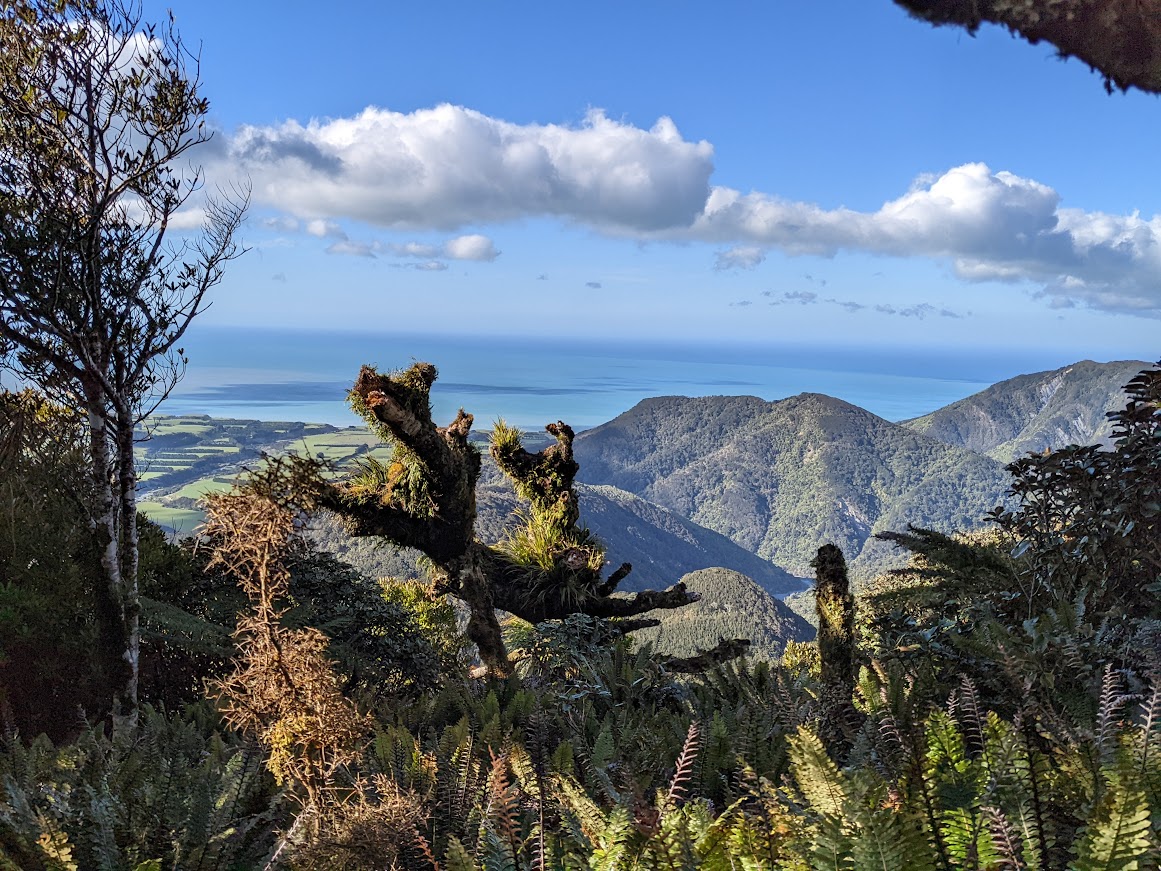 Papatahi Crossing was on Tash’s tramping check list for a long time. She decided to make her dream come true with five other people – Amy-Louise, Elisabeth, James, Maj-Britt and Tracey. Since I’m French Canadian and don’t know where things are in NZ, I decided to join this medium fit trip and to follow the leader in her adventure!

On Saturday morning, we leave Wellington around 9am. Everyone was happy about that because we can sleep a little bit more on Friday night. We arrived around 10:30am, and started walking around 11am. Sunscreen was necessary because it was a sunny day. As we started to walk on farmland, we realized it was difficult to find a place to go to the toilet! We were happy to find a small shed and everyone took a turn! The path was easy to follow. Some of us were a little bit afraid to be electrocuted by the fence, but of course, everything was fine.

We all enjoyed the walk on a flat trail for approximately one hour. We entered a little bit of the bush and the trail continued to be very clear and beautiful. We had some spectacular views. Around 1pm, we were surprised to see a dog and a man in the bush. There were very kind indicating the path to take to go to the stream. Was the man speaking to us or to his dog? Neither of our group knows that answer yet. After lunch in the sun, the path continued to the bush for not more than three hours until arriving at Wharepapa Hut.

As we knew that the path for Sunday morning could be difficult to find, we decided to have a look at the Wharepapa River to find the path before it got dark. Unfortunately,  Tash wanted to show us the possible track on her map but she fell on a rock with her phone. The good news was that only the mobile phone was broken! Our whole group decided to find the trail. Some pink markers were already there, but it was a little bit confusing for everyone.

Some of us made a cairn, whilst others added yellow markers to help us in the morning. Some branches were positioned so we’d know to not go past that mark. After maybe one hour, the track was well indicated and we went back to the hut to have dinner. We enjoyed the fire that we made and went to bed very early to be ready for a long day on Sunday.

We left the hut around 6:30 in the morning ready to walk 10 hours or maybe 12 hours. After a few minutes of warmup in the bush, we arrived at the first section: to climb Mt Papatahi; 902 meters of elevation over 2km. With the help of some leaders, we were very careful to follow the orange markers. It was very steep and the orange markers were not always visible. As Elisabeth was first, she saw some leaves moving and strange noises…Was it a bird ? Elisabeth learned the big black pig was a boar, a new English word to add to her vocabulary. As Tash’s mobile was broken and the boar, who was probably too afraid of the group, we were not able to take a photo.

We arrived at the top of Papatahi three hours later. Like any mountain that goes up, the group must then go back down. Tracey was the leader of that section and the group was quite fast at going down. We arrived a little hungry at Boulder Stream. We decided to have lunch right there, with the sound of the stream next to us, six hours after leaving the hut.

After lunch, we continued travelling downstream and the sun guides us to our final destination. We needed to cross the river a few times, but we had no trouble crossing it. We stopped at Papatahi Hut to have a small snack. We were not used to climbing stairs anymore and the 150 meters it took to get from the stream to the hut was a little tiring for all of us.

As our driver, Monique, was supposed to join us at the carpark, we were very surprised to see her at the loos near Big Bend and Orongorongo track intersection. We were very happy to arrive, two hours later, at the carpark after an 11-hour day.