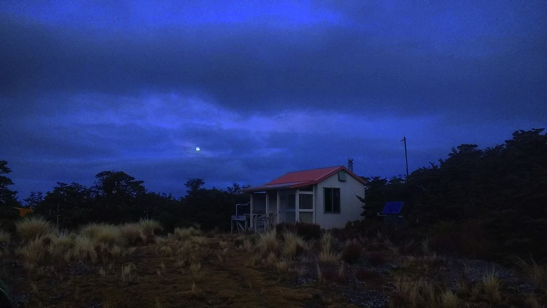 The trip got off to a great start, with an uneventful 5 hour drive north on Friday evening.  We dropped the hunters off at Masters Shelter for their own adventure and the rest of us continued another 10 minutes up the road.  On arriving at the parking place for the beginning of the short 10 minute walk to Sentry Box hut we found another vehicle. Luckily the vehicles occupants were not at the 4-bunk Sentry Box, or else someone would have had a fairly cold night outside.  We arrived at Sentry Box hut around midnight.  We would bump into the vehicles occupants the next day coming back down from a hunting trip on the ridge.

Our fun began around 8.30am on Saturday morning, when we began the 800m vertical climb which would take us up onto the ridge.  Three and a half hours of steep, muddy, slippery walking had us at the Sentry Box/Parks Peak/Aranga junction, with a snack and view stop at the Rocky Knoll halfway. From the junction we split into two groups, planning to leapfrog each other along the trapping line.  A few examples from Antonia of how to safely reset a trap and we were off, beginning at trap number 37.  Our only bounty for the day was one stoat, however that could be the lives of a few little birds saved.  On reaching trap number one and we turned back, retracing our steps to the junction with Rohan deciding to really give his legs a stretch along the way and jogging the short distance up to the trig point at Pohatuhaha (1368m) and back in only about 10 minutes.

We walked a further 50 minutes from the junction to get to Parks Peak – a really well kitted out little hut with a great stove and running water from a tank.  In my naivety I briefly thought it had a solar panel – turns out that’s for the weather station instruments.  In hindsight, this makes much more sense, but a tramper can dream.  Note to others – if you’re there when it’s dry, make sure to stock up the dry wood at the side of the hut if you can, there isn’t too much about.

After a cosy night in the hut we set off at 8am the next morning. We made the decision to head straight for the van instead of stopping to reset the traps between Parks Peak hut and the junction due to time constraints.  It took slightly longer to make it back to the junction from Parks Peak, but the steep muddy trail from the junction to Sentry Box was much faster, funnily enough!  All of us eventually succumbed to the slip’n’slide way of life (probably shortening the lifespans of our washing machines in the process) and we were back at the van around 11.30am, ready to pick up the hunters and make tracks for the bright lights of Wellington.