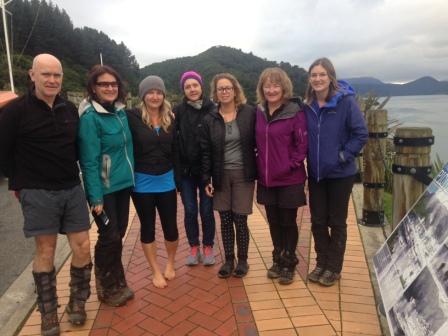 We joined our fellow WTMC trampers on the evening ferry to the South Island followed by the very short ride to the Sequoia Lodge Backpackers for a comfortable night’s sleep.  We were a mixed bunch of club newbies and seasoned trampers.  The plan was to complete the linear Nydia Track, walking from Duncan Bay to Nydia Lodge on Saturday, spending two nights there (with a shorter local walk on Sunday) and then completing the track from Nydia Lodge to Kaiuma Bay on Monday.

Saturday morning was crisp and clear and Aaron from Sea Kayak Adventures was waiting at 7.30am to take us along the windy roads of the Sounds to our start point.  On arrival at Duncan Bay most of the ladies had their first test in navigation skills to find the nearest toilet!  Once back at the van, packs and layers were adjusted, heads were counted and we said farewell to Aaron and set off about 10am.

For the first part we were on a defined path surrounded by rimu, beech and tree ferns which stayed close to the shoreline.  After an hour or so we left the coast behind and climbed inland towards Nydia Saddle stopping at a sunny sheltered spot for an early lunch a wee bit short of the top.  We enjoyed beautiful views of Ngawhakawhiti Bay in the warm sun before carrying on to the highest point of the Saddle (347m).   We continued gently downhill for another hour before arriving at the Nydia Bay Campsite and had a break here to enjoy the view across the bay.  At this stage we thought we would reach the lodge within a good hour but it was further than we thought.  After walking for another 1.5 hours and crossing a river (some in bare feet!) to get to the other side of Nydia Bay we reached the sign for the turn-off point to Kaiuma Bay.  It was then another 30 minutes along the coast before reaching the lodge at 4.30pm, 6 hours after we set out and a total of 18km completed.

The lodge is in a large grassy clearing with a large dining room and kitchen area with 9 separate bunkrooms.  As initially we only had access to one bunkroom which only slept 7 and taking advantage of having the place to ourselves, we decided set up camp and sleep in the dining room.  Evidence of mice droppings in the kitchen galvanised us into scrubbing the kitchen clean and we flung open the oven doors to avail of the heat from the gas.  Bare light bulbs flickered on and off in the kitchen as the power from the generator surged which added an extra element of danger whilst preparing the Pad Thai with Chilli Tofu.  Frances treated us to a variation on bread and butter pudding with left-over noodles and donations of dried fruit.  Discussion over pudding varied from personality traits to WTMC use of the term ‘punters’ and a flick of the generator switch around 8pm brought an end to our chat for the day.

We had a leisurely 9.30am start on Sunday morning after a warm up by the gas oven and breakfast.  It was a damp morning as we set out back along the bay past the sign for the Kaiuma Bay turn-off and onto a cleared area with lodges and turned inland along the Nydia Tramway Route.  This route follows the old horse-drawn tramway which starts at the head of Nydia bay with the remains of the wharf where ships took logged timber from the nearby hills to Australia.  We walked through the dense damp forest and across a river to a clearing where we stopped for lunch. Just after lunch the route takes a very steep incline which some decided to follow in a bid to reach the top but after walking for another 500m or so it was decided to turn back to meet the others waiting below.  We returned to the lodge to find we had the company of two German families who had walked and biked in to the lodge from both ends of the track to meet in the middle.

We promptly gathered our mattresses from the dining room and headed for the bunkrooms which we now had access to.  Dinner was a great meal of Chorizo Cous Cous followed by another sweeter variation of the noodle pudding.  After-dinner entertainment for the Germans was a photo-shoot sitting on the armchairs in one corner of the dining room while we played the mostly popular parlour games.  Our numbers dwindled quickly as we sat around the dining table discussing the latest developments in psychiatry.

On Monday morning some of the group couldn’t resist having a walk around the Fitness Trail in the grounds of the lodge before setting off on the track.  We left the lodge at 9.30am and headed back along the bay, this time taking the turn-off to Kaiuma Bay.  The track leads across open farmland and then into the forest to climb towards Kaiuma Saddle (387m).  From the saddle the track drops to a river then climbs up a wide track through pine forests passing a landslide and a few fallen trees across our path.  We had the company of three fantails as we walked through the forest and had glimpses of the open fields and bays below.  Finally we dropped down and met the Kaiuma Bay Road 5 hours and 19km after setting off.  It wasn’t long before we heard the wheels of the van coming along the other side of the bay and Aaron got us back to Picton in good time for a stop-off at the pub for a drink and a bit more chat.

I found the Nydia Track to be a beautiful, inspiring place to spend the long weekend in the company of some lovely lively people.  The pace was leisurely and the conversation was varied but was always flowing…..isn’t that right Kevin!