The previous two trips being so enjoyable it was pretty much inevitable that I’d be out again the next weekend. The tails of excitement have clearly captured Angela’s imagination and she is a keen starter.

I’m running the same bike set up as the previous two weekends with the exception that we now need a two person tent. The Macpac Nautilus rolled tight bungees to the handlebars neatly and causes no problems at all. In fact the forward weight is welcome on the steep up hills.

The 6.25pm sailing is sold out so the 8pm Kaitiaki sailing it is. We board with the vehicles and make our way to the far end of the vessel and the bike park. This turns out to be a cheap bike stand in an expansive puddle. It looks way too precarious to park the bikes in the designed fashion so we lash them together across ways.

This sailing is noted as having limited services and they are that. It becomes a bit of a game trying to find someone to serve the food that is available. We unwisely snaffle the last two items in the pie warmer; a sausage roll of dubious character for Angela and a kumara and cashew pie for me, goodness knows how many sailings they have survived. In between abortive forays to the cafe, the rest of the smooth sailing is spent trying to snooze like the rest of the passengers.

The Picton streets are very quiet and we have a pleasant ride in the mild evening through to Waikawa Bay and on to the rural road to Whatamango Bay. The odd possum crashes up a roadside tree but it’s the little blue Penguin in the middle of the road that causes the most consternation. It appears out of the night in front of Angela’s front wheel narrowly avoiding an untimely demise as I swerve to miss Angela swerving to miss the penguin.

It turns out to be quite an easy cruise to Whatamango Bay campsite. We bump down the drive, pay our dues and pitch the tent. There’s tonnes of space, good grass and a basic but tidy ablution block. Lights out at 12.30.

By daylight we can see we are in a 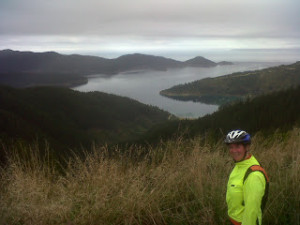 quiet valley, on a large flat area with clumps of bush with plenty of nooks for camping. Leaving the camp we turn left and grind uphill for 5K (400 vertical meters) with no stops. Enough said about that. A road cyclist cruises past with a cheerful “Nearly there; 1K to go!” He must be a regular as it is 1.1K.

At the top we allow ourselves a breather to look east and south into Port Underwood. Oyster Bay is far below and we can see our road disappearing around Willawa point; hmm, it looks like gravel already.

From the saddle a 4WD track heads northeast along the ridge. It doesn’t actually say no entry so this could be something to investigate another day, it also provides a gap where we can see back down to Whatamango Bay and beyond into Queen Charlotte Sound.

The descent is entertaining and at the bottom we turn right to wind over and around the many spurs and bays. Oyster Bay is first and apart from the large Kuni Kuni pig our enduring memory will be the start of the gravel and the realisation that the grader has just been through. Still, at least it’s not new metal.

The road winds through bush (although later there is an awful lot of pine), dropping and climbing constantly. The dips skirting picturesque bays and patches of farm land, the rises giving glimpses up, down and across Port Underwood. Each bay has its own character and many seem to have been associated with 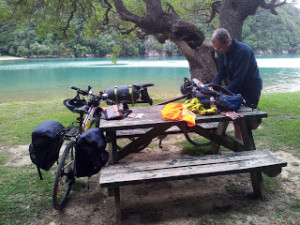 whaling. The drop into Tom Cane’s Bay brings the delight of new road metal. Angela watches Andrew slew his way cheerfully down the hill and wisely dials in a more sedate pace. The experience is somewhat disconcerting and she votes for a cuppa tea stop before facing the loose climb out of the bay.

The bay has a short sandy beach, a wee stream and plenty of space for picnicking. The penny stove is soon doing its thing and we sit under a tree sipping our tea, nibbling a mallowpuff and watching a couple of Oystercatchers work the tide line around the bay. We allow the setting to divert us for a little longer than planned but there’s no time pressure today so why not; this is simple, pure contentment.

We mark our progress by the approach of Robertson Point; the end of the spit that separates Port Underwood from the open sea. The rises so far have been below 100m but leaving Ocean Bay, the hill continues upwards to about 270m. This gives magnificent views and a thoroughly entertaining downhill to Robin Hood Bay but takes its toll on energy reserves and dwindling water supplies.

Robin Hood Bay (probably named after a ship) means we have left Port Underwood behind. There’s an historic cottage, a bit of Maori history (gardening) and it’s the most obviously visited spot with a large sandy beach, boogie boarders enjoying a modest surf break and plenty of space. There is a DOC campsite but it doesn’t have drinking water and it’s a little early to stop for the night so we reluctantly head up the next hill.

It rapidly becomes clear that a lot of vehicles travel here from Blenheim. The road becomes wider and relatively busy (10 cars an hour) and somewhat corrugated. The first hill is steep and climbs to a similar height to the last, with (just maybe) a little bit of pushing involved. The top however brings views across Cloudy Bay to White bluffs and beyond to Cape Campbell. Now it’s just the last short haul to the blissfully flat landscape of the Wairau plain.

We bypass the DOC campsite at White’s Bay but appreciate the return of the bitumen as we head up the last hill and into a couple of rain showers.

We’re up just before the sun and decide that Blenheim may have something more appetising to offer for breakfast than muesli and milk powder. We are both a bit vague about the geography between here and there but figure it can’t be too hard. The air is cool but it’s clear and the sun is at just the right angle to throw the rumples and folds of the Wither hills into relief, with a snow capped Tapuae o Uenuku lurking behind.

It’s about 20kms to Blenheim which is just stirring at 8.20am when we find the one open cafe. Figaros’ turns out to be an excellent find serving good coffee. Angela’s eggs Bene, and my pancakes are as good as you will get anywhere. The sun streams through the open door thawing us from finger tips to toes.

Our next destination is the small but perfectly formed farmers market. The day is starting to warm and the place is buzzing. We don’t have space to buy much but happily demolish a tray of fully ripe raspberries.

New Renwick Road takes us westwards through vineyards to Renwick where the road turns north. We decide to split and take both sides of the Wairau river to State Highway One; Angela down Rapaura Road whilst I cross the cycle unfriendly Wairau Bridge and turn right down the Kaituna – Tuamarina Road. This is a little more meandering with a few kilometres of gravel in the middle. It wouldn’t be suitable on a road bike but is quiet and doesn’t have any hills.

My road emerges on State Highway One right next to our rendezvous point; the site of the Wairau affray. I have about 20 minutes to read about the sad affair before Angela texts, she has been at the picnic table on the other side of the tree for 10 minutes. We lie in the grass looking into a cloudless sky munching OSM bars for lunch.

It’s about 20 Km to Picton into a firm head wind on a busy road. We have plenty of time so potter along ignoring the trucks and traffic whizzing past. It’s a good shoulder and pretty flat so not too bad a ride. A little after halfway we take a break at a memorial to two hunters “killed in tragic circumstances” in Robin Hood bay in 1966.

What we had thought was “the hill before Picton” turns out to be a bit of a rise. We coast down to Picton to drink excellent iced coffee and a cold ale at Le Café within minutes. The day is sunny, yachts are racing in Picton Harbour and the Blind Boys of Alabama are playing on the stereo. We keep just eno 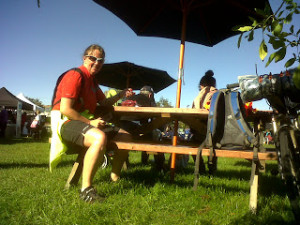 ugh orders flowing so as to not outstay our welcome and the afternoon passes very pleasantly.

Waiting to board the 7pm sailing we are left in a tiny port-a-com waiting room. The other inhabitant turns out to be another tramping club member who has been biking the Wakamarina track so there’s plenty to talk about.

The crossing is pretty smooth and Mike meets us off the Ferry (i.e. texts to say he’s just leaving home). He forces me to put the bike on their rack and accept a lift home; I figure this isn’t really departing from the spirit of the trip, after-all, it is well after 10pm on a school night.

So that’s the story to date. I have a few more ideas for similar trips which I’m dying to try out but there’s a bit of a back log of stuff to see to at home first.