Later the following week I decide to do a road foray along Keneperu Sound. I study the Topo map carefully and the DOC website; there seem to be plenty of camp-sites and a fair length of road to explore so that’s about as detailed as the plan needs to be. I commute to work with the bike set up for action and dash for the 6.25pm ferry.

Catching the ferry always feels like the start of a holiday. The grape vine ride is on this weekend so there are more than a handful of cyclists that walk their mounts onto the freight deck of the Arahura. Although this is one of the better ones I have discovered that the arrangements for bikes on the ferries is variable (I now carry a few short bungy cords as you can’t rely on anything suitable being available).

A light wind in Picton at 2130 doesn’t make it cold but I am pleased to have two layers on as I swing onto the Grove track. The ferry traffic quickly passes through and I’m left on my own on the dark road. It’s a straight forward and pleasant 15K ride to Aussie Bay camp-site a little over 40 minutes from Picton. I find the last decent tent site and settle down for a quiet night.

In the morning I opt to head for the Queen Charlotte track (after the necessary ‘change in plans’ text). It’s a short ride to Anakiwa where I discover that there is a $12 charge to access the track and a complicated machine to relieve you of your dosh; credit card an option for an extra fee. Two MTBers pull up and leave their car to head back to Keneperu saddle by road. They intend to come back along the track; a good day option if you have a vehicle. 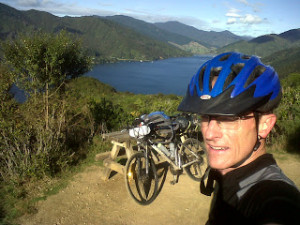 ly. The track is wide and easily graded; never climbing above 200m and allowing a good pace.

The next section to Torea saddle has two hills and a bit of pushing; it is narrower, steeper, climbs higher and is more technical with some down-hills requiring attention. There are a few people on the track but nowhere near crowded so quite enjoyable. Views open up into Queen Charlotte and Keneperu Sounds.

It’s getting towards lunchtime so I take the option that gives this track such broad appeal; taking a break at a cafe. It involves the loss of 100m altitude but the gain of a gourmet burger and fries. I send a few “I’m still alive and changing my plans” texts, which may have had a slight hint of self-congratulatory smugness.

There’s plenty of day left so I decide to knock off the next section of track. It’s longer (24K) and reaches about 500m altitude with a number of ups and downs on the way but conditions are generally better than the last section. Some hills I would have grunted up in the morning become an excuse to get off and push for a bit.

For the first half there are quite a few people, about 50:50 MTBers and walkers. It’s enjoyable riding and people are chatty. Most appear to be day walking with boat pick-ups pre-arranged. At Black Rock Shelter I meet the two MTB chaps from the morning who have some useful tips for the track ahead. 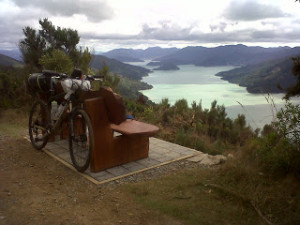 The views are fantastic: Queen Charlotte Sound and Tory Channel to the South, and eventually the length of Keneperu Sound to the west. At some point the track reaches its highest point of a little under 500m but eventually I have the feeling that it is grading down for the rendezvous with the road at Keneperu Saddle. It takes a while to do so and there is a prolonged section where the combination of water on the track, clay and road slicks makes for interesting riding. There is only one point where bike and rider go their separate ways, but it happens at low speed with no damage to either.

About 4pm I come to the gravel road at Keneperu saddle. Ahead the track continues to Resolution Bay then on to Ships Cove; to the right the road drops to Punga Cove, and ahead to the left is the road to Anakoha Bay, Titirangi Bay and Port Gore. However this is the furthest point for this weekend so I take the gravel road to the left and behind; back to the head of Keneperu Sound.

The road turns to seal near the head of the Sound and the DOC camp-ground here looks pretty good, but there’s still a bit of daylight left so I carry on to Portage. It’s good riding albeit I’m somewhat slower than in the morning. There are a few DOC camp-sites along the way providing good options, and frequent enough that if one is full you could just push on to the next.

It’s about 5pm when I roll into Portage and, for the second time today, take a break at the café/bar. Cowshed Bay is 600m along the road and the only residents when I arrive are another cyclist and a couple of weka. Half of it is a construction site at present but it should be pretty good when finished.

There’s a bit of wind in the night but it is calm by morning and the daylight saving donated extra hour is appreciated. It turns out that a weka has knicked my single serve muesli so I head up the road chewing on an OSM around 7.30am.

It is a little further than I thought to 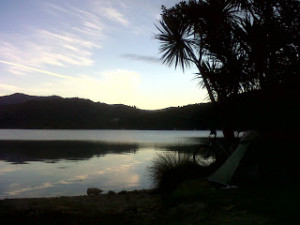 Linkwater on the Grove track and although there are no major hills, there is a fair amount of up and down. However I pass Aussie Bay about 9am, and arrive at the ferry terminal by 9.45. Yes, my ticket can be changed to the 10.30 sailing ($5 surcharge) and there’s even time for a quick hot chocolate at a cafe to drive out the morning chill.

I join the grape riders and board the Aratere for a somewhat lumpy return to a gloomy Wellington. The final leg home slots neatly between rain showers and by 2.30pm it’s all over bar the unpacking.

The verdict? Queen Charlotte is a great fun ride accessible in a weekend from Wellington. It is not technically challenging and there’s plenty of flexibility to mix and match your trip options. I had a ball and was still home by mid-afternoon Sunday. The bike set up performed well. After the previous trip I lowered the carrier bag as far as it would go and put the heavier kit in my back pack. Although the track is pretty good it is still pretty hard on bike mounted gear. The handle bar mounted sleeping roll didn’t get in the way of the steering and helped distribute some weight forward.