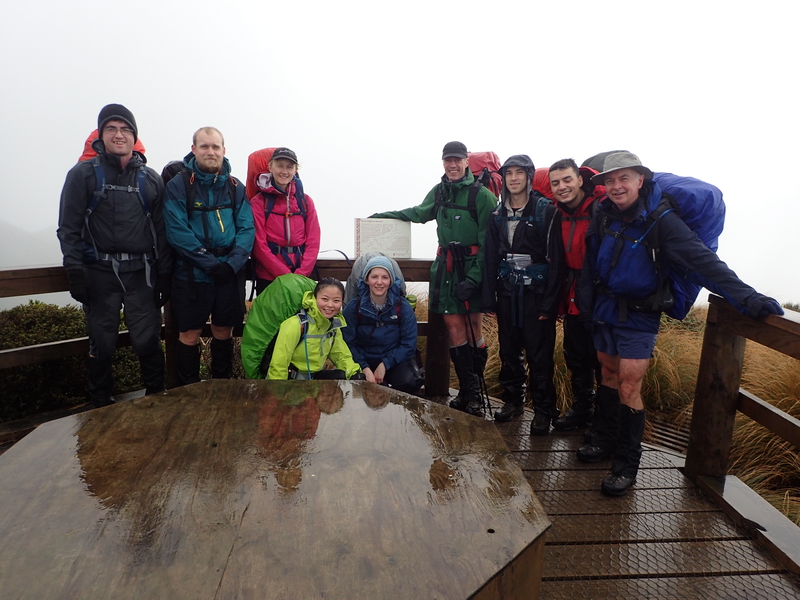 We drove up to Taranaki on Friday night with the standard stop at Bulls. The journey took around 5.5 hours in total with the weather steadily deteriorating as we got closer. We stayed at The Camphouse on Friday night, arriving about 22:30 hours. It’s just above the the North Egmont DOC Visitor Centre. As well as a kitchen the lodge has showers and hot water – lay your sleeping bag out on a bed and you’re only a concierge away from a 5-star hotel!

The Holly Hut Track between Boomerang Slip and the Kokowai Track junction was closed due to a large landslide, so we had to use the Kokowai track lower down the mountain instead. We set off on our tramp on Saturday morning, leaving the van in the very small Kaiauai car park at the track start; fortunately there weren’t many vehicles there. That saved some extra distance on the Ram Track.

The track was muddy in places and submerged in others, not a surprise given the weather. We walked the circuit anti-clockwise which meant that the first couple of hours were in the bush before we emerged out into scrub and headed towards Holly Hut for lunch. The worst of the mud had wooden boardwalk over it which was quite slippery in the wet! Often the boardwalks were submerged in flowing water. We had to cross a small stream to get to the very nice Holly Hut (32 bunks) which would be nothing at all in Summer but the depth after all the rain meant wet boots for the rest of the trip. After eating, people were keen to move on quickly to warm up again.

Continuing on we walked through the Ahukawakawa Swamp which was definitely swampy, luckily the path was boardwalk here too. The climb out of the swamp is mostly wooden steps up through the bush to a ridge. Studying a map of the area it looks like there are great views of Taranaki from here, on a clear day, but for us it was all cloud!

From the top of the climb Pouakai Hut is an easy kilometre on good paths and boardwalk. The hut itself sleeps 16 in two 8-bunk rooms with good cooking/eating areas of space as well as a woodburner. We had the hut to ourselves, which was no doubt down to the weather. We were told by DOC that there can be 60 people on a fine holiday weekend trying to overnight there.

Day two started with the tarns and involved another couple of climbs where, again, the worst sections had boardwalk and steps to make things a little easier.

The first climb was to the top of the towering Henry Peak (1100 → 1224 m), another spot with theoretically great views of Taranaki and the surrounding landscape! Henry was pleased to be home 🙂

From there we headed down into the bush for a straightforward, albeit muddy, hike back to the warm, dry van and food and drinks at the DOC Visitor Centre.

A great weekend with some excellent company, but definitely one to repeat when the weather’s clear and the mountain decides to make an appearance! At least everyone’s winter gear was tested successfully.