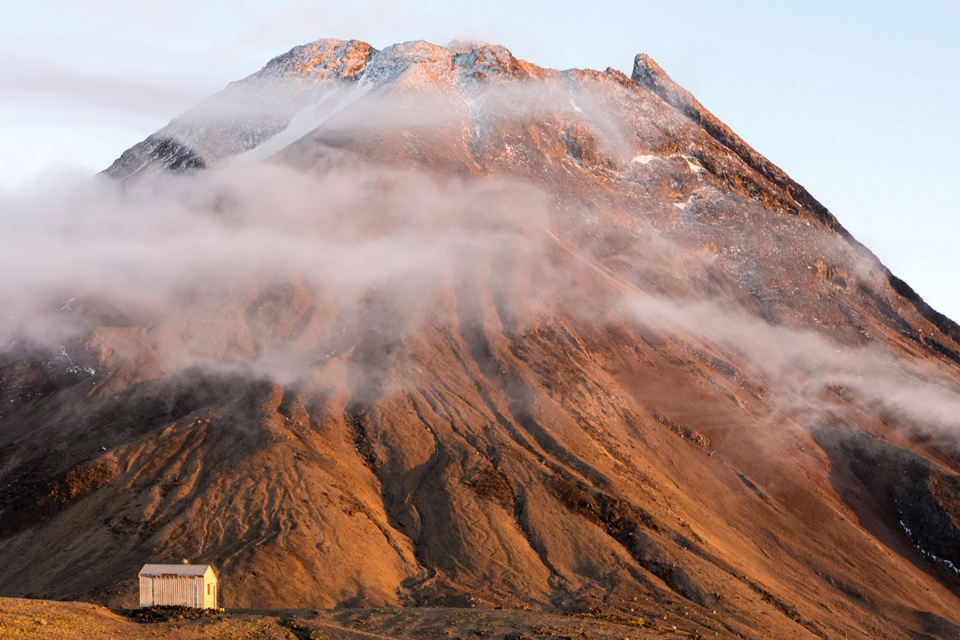 Not so long ago many mountain gods lived happily together on the central plateau of the North Island. All the warrior mountains longed after Pihanga, the lovely bush cloaked maiden volcano— but particularly Tongariro and Taranaki. Eventually they fought ferociously, the sky darkened, there was thunder and lightning, and lava spumed from their summits. Tongariro was the stronger and defeated Taranaki and, after receiving a final blow to his side, Taranaki retreated as far away as he could, carving the trench of the Whanganui River as he went and filling it with his tears. He stands where we know today, still showing the final scar of that battle with a gaping wound to his western flank. Meanwhile Tongariro stands close by his hard-won Pihanga.

The Maori myth was by far the best explanation of the landscape we see today until plate tectonics. But if you have been following the news, there is now a movement that somewhat takes us back to the myth—and one that as outdoors people we should be following and embracing.  Very soon Taranaki will be granted by law the same legal rights as a person. This follows the granting of the same status to Te Urewera, and the Whanganui River. This is ridiculous, you may think—but is it?

In 1972 Professor Christopher Stone published an elegant and provocative review entitled:  Should Trees have Standing? Toward Legal Rights for Natural Objects. Stone effectively argued that natural objects and areas should have legal rights, and noted how the law had progressed over time to confer rights to persons or entities that society previously had considered incapable or unworthy of having them: children, slaves, women, racial minorities, endangered species, all of which have now been granted legal rights.

Stone wrote the article to assist the Sierra Club in the USA in a law suit against Walt Disney who wanted to develop a large ski resort in the Sierra Mountains of California. The club initially lost the case because they were deemed to lack standing—that is, they could not show that they would suffer any legally recognised harm. Stone argued that the trees and mountainsides that would be destroyed by the development should be given legal standing and the Sierra Club could then be seen as legal guardians of these rights. The verdict was overturned on appeal, the development was shelved, and the area eventually added to Sequoia National Park.

Now some 35 years later, NZ has been the first country in the world to grant personhood to a river—India followed soon after with part of the Ganges. We have now moved on from rivers to mountains and Taranaki will also legally have the same rights as a person—essentially it can sue (and be sued) in the same way that you and I can. If you are injured in an accident that is not your fault you can expect compensation for the costs of being returned to good health—now Taranaki can be expected to be compensated  and returned to environmental health in the event of any injury.

As trampers who cherish the wild outdoors in their natural state, it is a positive and welcome step. However, there are problems. Our club has a lodge on one of the mountain gods, Ruapehu, and we contribute to the damage to the mountain environment by wanting and using chairlifts, cafes, and other facilities that are arguably not there for the mountain’s interests, and can be seen as injurious to it. But of course it is not clear that we really can completely agree on the interests of the mountain—perhaps the mountain is tired of being undeveloped and would welcome some excitement.

So who should represent natural objects? In the case of Ruapehu, the Associated Ski Clubs would have a very different view than, say, Forest and Bird.  Acting on behalf of the Whanganui River’s interests will be an appointee from Whanganui iwi, and one from the Crown—who may hold that the river’s best interests are quite different from those of a local farmer and an electricity company. But in spite of these difficulties we as a club should regard the current moves to give personhood to some of the natural features that we visit often and (hopefully) respect as another welcomed step forward to recognising those objects we see as worthwhile and deserving of legal status.

Will granting legal personhood status to Taranaki change much for us? Probably not a lot. We should always remember the simple environmental ethic: ‘take only photographs, leave only footprints’. But one change we should consider carefully—should we respect the summits of peaks such as Taranaki as tapu? The club is unlikely to make a ruling on this, but hopes that club members are aware of the need to respect others and in this case simply stop short of climbing to the top of the final boulder. Clearly, if you are on a club trip and the leader states you should stop short of the top then you must do so regardless of your point of view.

It is interesting that NZ is once again leading the world with this type of legislation—remember NZ was the first country in the world to grant the legal right for women to vote—and the club is scouting around to find a speaker to come along to a Wednesday meeting and give a talk on the issue. It should be well worthwhile coming to listen and ask lots of questions. Keep a look out for a date.