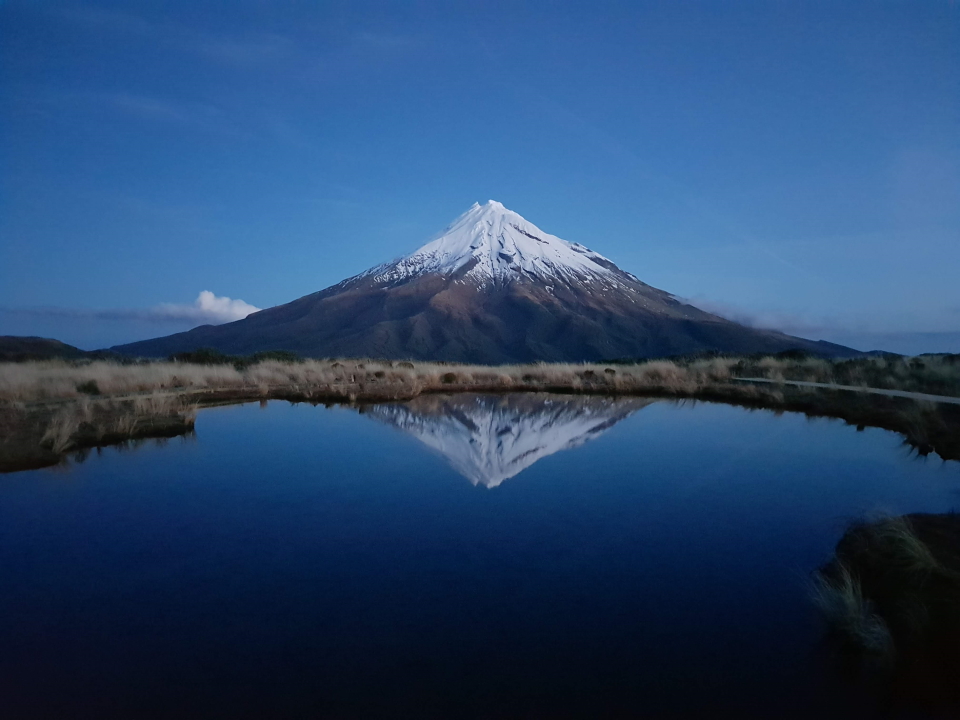 This was my second time on the Pouakai Circuit. The last time I went, just over a year ago, the track was underwater and there was no mountain to be seen – the pictures in that trip report  say it all. While I absolutely enjoyed that trip, I was hoping for much better weather. This time, Taranaki delivered.

After a Friday night drive up, we stayed at the Camphouse on the north slopes of Mt Taranaki. The Camphouse, with fully equipped kitchen and hot showers, is definitely the luxury option for track‑end accommodation. Our first sight of Saturday morning was a glorious sunrise and views all the way out to the Central Plateau.

The start of the circuit, the Holly Hut Track, was still closed after a landslide blocked it in April 2018 so Caryl’s Lake Dive group dropped us off at Kaiauai car park for the alternative route. We made quick progress up the Kokowai Track, with the mountain disappearing behind the cloud that it would hide behind for the rest of the day. As we neared the junction with the Holly Hut Track, we could see the slips that had necessitated our detour.

We made it to Holly Hut for lunch, with plenty of time for a side trip to Bells Falls. The track to Bells Falls was muddy and slippery over its 150-metre descent and we were glad we left our packs at the hut, but it was worth the trip.

We continued on through Ahukawakawa Swamp and climbed up a few hundred metres onto the Pouakai Range. Looking over our shoulders, there were occasional glimpses of parts of Mount Taranaki behind the cloud.

We made it to Pouakai Hut mid-afternoon. There were plenty of people there, but most were just there on day trips as it’s a short 2 hour walk from the nearest roadend.

Later that evening, while we were cooking dinner and just as the sun had set, we heard from others at the hut that the cloud around the mountain had cleared. Anastasia and I went out to have a look and found ourselves at the Pouakai Tarns (about 20 minutes from the hut), where Anastasia got a stunning photo on her phone’s camera. My digital camera didn’t do so well in the low light.

The next day, the cloud cover returned, resulting in a different view of the mountain.

The track continued with a relaxed descent, and then a short but steep climb up Henry Peak. The descent from here goes back down into the bush. We made it to Kaiauai Shelter in good time, and decided it was too early for lunch, so kept on going to the carpark.