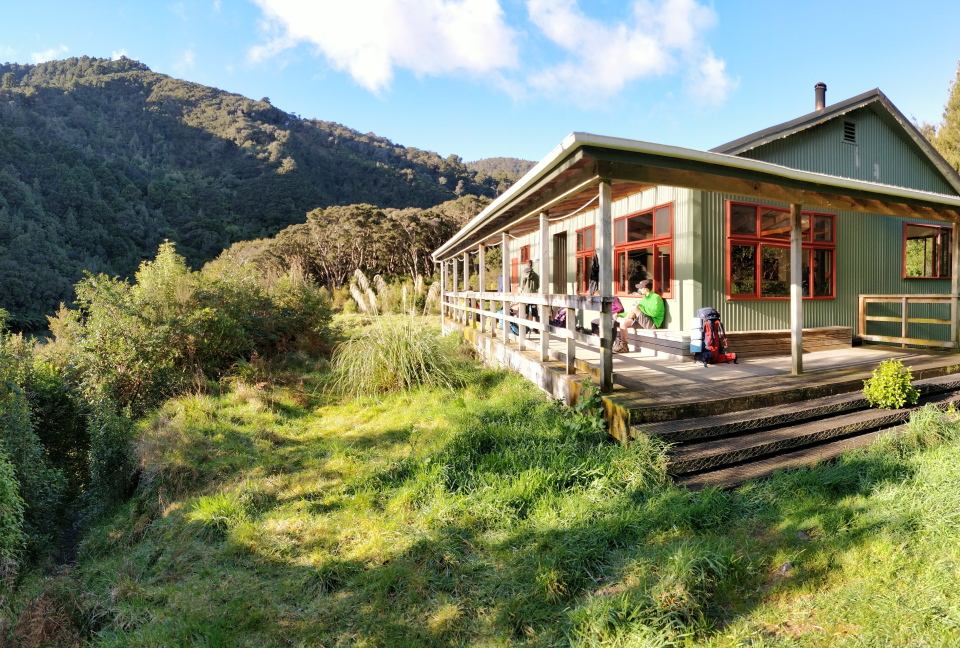 The Totara Flats tramping crew was a mixture of more experienced trampers and complete newbies (myself included!). The tramp was graded an easy-medium trip, with around 4-5 hours walking to our destination of Totara Flats hut.

After a very early and groggy start to Saturday morning for some of us, we met at Wellington Train Station and drove over the Rimutaka Range to the beginning of the tramp at the Holdsworth roadend.

There was some light drizzle as we began the easy first stretch of the tramp, up the Gentle Annie Track, which took around 1.5 hours. The newbies were getting used to their hefty packs – definitely a reminder to pack light! Along the way we had a quick stop to check out the stunning view at the lookout.

We were in good spirits as we began the descent down the Totara Creek Track. The drizzle continued and terrain got more challenging. Previous rain had made the track very muddy, and with plenty of tree roots and steep terrain thrown into boot, the track became slippery and a bit of a challenge! Sturdy hiking boots to prevent ankle rolls were a must. A quick stop for lunch at a fallen down log gave us the energy for the last hour and a half of the tramp to get us to Totara Flats Hut. Due to the conditions it took us around an hour longer than the DOC time to reach the hut.

However, before we got to the hut there were two river crossings with two swing bridges that tested my fear of heights. The second swing bridge did bring on a case of the sweats, especially with it being mostly made from what looked like gate wiring, but apparently it was safe for one person at a time.

The hut was packed that Saturday night to full capacity (around 28 people plus a few extras sleeping in the lounge and outside), with a mixture of high school and university students, hunters and friends out for a weekend in the great outdoors. Being August, it was chilly but once we got the fire cranking and the billy filled for hot drinks, yarns were being told. Lost trampers arrived and friends found them again, a reminder that you need to be careful with following tracks in the Tararuas. We had an amazing vegan satay meal thanks to the WTMC cookbook and helpers on hand. We went to bed at ‘trampers’ midnight’ (a great new term I learned and will be using from now on!) at 8:30pm.

We woke up to a brilliant sunny morning and had a relaxed breakfast with the rest of the hut. After a good night’s sleep, we were ready to face the tramp back. The swing bridges across the river seemed less daunting and the track had dried up so the terrain going back up through the forest was a lot more forgiving. We blitzed ahead to get back to Holdsworth Lodge with plenty of time to spare to meet up with Richard’s group, who had gone to Neill Forks Hut.

We arrived back in Wellington during the evening, tired but stoked that we had a good weekend and met such lovely people. A big thanks to our trip leader James for helping us less experienced trampers out during the trip.