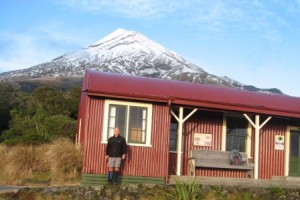 Most of my tramping gear is kept in the attic, to be fished out every month or two. There are several pairs of everything up there, which can lead to mix-ups on occasions. One of those occasions was when I agreed to lead the Pouakai Range circuit trip in Egmont National Park in May. The trip is described in the main tramping guidebooks, so it was well-reviewed – although we found that, for our group of three, the recommended times were greatly overstated, especially the part of the loop via Holly Hut. 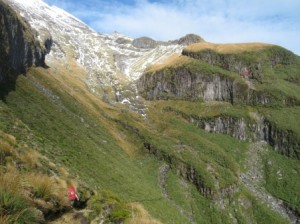 There’s a ‘camp house’ at the North Egmont road end, so we booked into it for Friday night. At $35 each it was a little expensive, especially as we made no use of the hot showers and minimal use of the ample cooking facilities. However, it was nice having a warm comfortable bed overnight, so I’d so it again.  We awoke to a crisp reasonably clear day, and set off at 8.30 after dropping the van down at the main car park. It was around then that I noticed that my gaiters didn’t match. Whoops! Christine politely pretended not to notice. Kate hardly mentioned it either (insert Tui slogan here). I later claimed that my non-matching gaiters were an experiment to see which performed best, but I don’t think the girls bought it.

In pre-trip planning I promised my punters great views of Mount Taranaki, and they were not disappointed.  After climbing a huge number of stairs we set off towards Holly Hut. There was snow on much of the track, which was icy in places. The Dieffenbach cliffs above were impressive, and, in case I didn’t mention it, there were great views of Taranaki. But it was soon apparent we were walking into not such nice weather. Jackets were donned to ward off the drizzle, and the rain started just minutes after we entered Holly hut for an early lunch. We shared the hut with a rat that didn’t seem the slightest bit concerned at having visitors. By the time we left, the rat had disappeared and the rain had reverted to drizzle and soon disappeared. 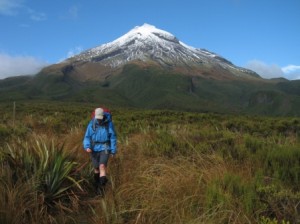 The next part of our journey involved crossing the Ahukawakawa sphagnum moss swamp, which was much better than it sounds. The swamp was created 2000 years ago when a landslide blocked the Hangatahua (Stony) River, which now snakes across it. (The DOC website uses the much sexier term ‘wetland’ for the swamp). We headed across the boardwalk and up the Pouakai range, pausing regularly to take in the wonderful views (which, in case I didn’t mention it, included Taranaki).

We reached Pouakai hut by 1.30 pm. After a break, Kate and Christine headed off to climb Pouakai  peak, the highest in the range at 1400 metres (before it blew its top 250,000 years ago, it was supposedly as high as Taranaki). The tops cleared for a while, but had clagged in again by the time they got to the top. We were on the western side of the park, where the weather was coming from. I decided to read instead, although the others alleged that I appeared to be snoozing on their return.  Admittedly I only seem to have read a couple of pages in the hour plus they were away.

Pouakai hut is less than two hours from a road end near New Plymouth, so is well-frequented in the weekend. A number of Taranaki blokes and blokesses arrived during the afternoon, two wearing gumboots. One group had a bottle of Canadian Club, several litres of mixes, and some beer. Despite that, they were surprisingly quiet and didn’t disturb us at all.

Sunday morning the weather was not so good. The Pouakai track being a circuit, we continued clockwise around it. As with previous day, the track was well-formed and often boarded, for much of the way at least.  But in the bush it turned into a more conventional tramping track that became rougher as we went on. The Taranaki bush has no beech trees, so provided plenty of variety from what we were used to down south. The streams carve large chasms, meaning a lot of up-and-downing, much to Kate’s annoyance. At one point we stopped by a sheer cliff with the river far below to admire a rainbow and a glimpse of mountain. But those were our views for the day, and it soon started to rain on and off.  We were all pretty wet by the time we reached the club van at 1 pm to meet up with the M/Fs, who had scaled Taranaki the previous day.

Kate suggested that the trip would be better done anti-clockwise, and I would agree. You get the best of the views without having to look behind you and, despite what DOC and the guidebooks say, the second day would be shorter that way. And for the record, the $50 Outdoor Research gaiter performed better than the Kathmandu gaiter purchased on sale for $24.95 (note: gaiters not for individual sale).