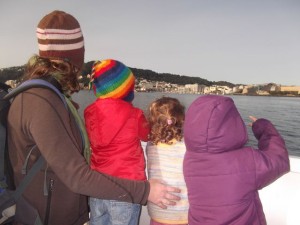 A day out to the island in the middle of Wellington harbor, catching up with old tramping friends I have not seen for years, learning some history and kids having the chance to run and run and run! All in all, a very relaxing chilled day … a highly recommended day trip.

Legend has it that Matiu Island received its original Māori names from Kupe, the semi-legendary first navigator to reach New Zealand. He named the island after his daughter (or, in some versions of the tale, niece) when he first entered the harbour about 1000 years ago.

In 1839, after European settlement, it fell under the control of the New Zealand Company and the island was renamed after Joseph Somes, the company’s deputy-governor and financier. In 1997 the New Zealand Geographic Board assigned the official bilingual name of Matiu/Somes in recognition of the island’s colourful European and Māori histories. 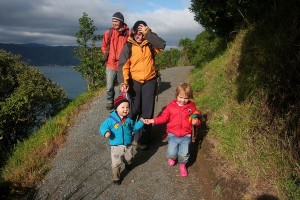 The walk around the island, which can take anywhere from 1 – X number of hours depending on how long your legs are, and which is also very achievable with a buggy, takes you past a lighthouse, originally built at the island’s southwestern end in 1866, replaced in 1900 and later automated and many other buildings which serve as reminders of the island’s history.

Throughout the 20th century the island has served as a human and animal quarantine station, an internment camp, and a military defence position. These buildings today not only offer some fascinating history, but also a great place for playing tag or hide and seek if you are a big or little kid! 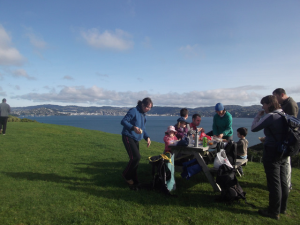 In 1942, the island was fortified with heavy anti-aircraft gun emplacements on the summit, but these were never used during the course of the war. This whole area was levelled flat for the purpose of this construction, removing 17 metres from the island’s previous overall height and creating a great place to stop, have a long leisurely picnic lunch and admire the fabulous 360 degree views of Wellington Harbour. A degaussing station was built to provide protection for ships against magnetic mines.

Matiu/Somes came under the full control of the Department of Conservation as a scientific and historic reserve in August 1995. Since 1989 it has been free of introduced mammalian predators, such as rats and mice, allowing it to become be a stronghold for the little blue penguin, several species of shag, skinks, geckos the silver gull, Brothers Island tuatara, North Island robins and fluttering shearwaters Wellington tree wetas and Cook Strait giant wetas and several rare and endangered species of plants.  On arrival at the island you will be asked to check all bags and shoes to ensure you are not bringing any nasty stuff which may affect the islands habitat. And are given a thorough history talk.

The Matiu/Somes Island Charitable Trust has been in existence since 1998 to help protect, nurture and enhance the island by raising funds for projects that increased biodiversity and enhanced visitors’ enjoyment of the island. You can volunteer on the island through “The Friends of Matiu/Somes”, DoC or the Forest and Bird group.