Are you from the Tongue and Meat tramping club?, the veteran Tararua Tramping Club member asked one of Hans’s punters in Atiwhakatu Hut on Friday night, when we arrived there after walking in for an hour and a half by torchlight from Holdsworth Lodge. No, she replied, clearly puzzled by such a strange name. Yes we are!, I blurted out. 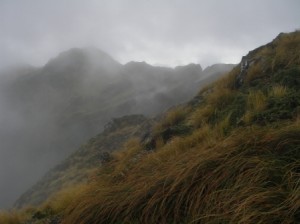 I was shocked and stunned. How sad. Has the once proud and noble nickname of our club been completely forgotten? Have we really been so overtaken by latte-supping yuppies and overseas interlopers unaware of our proud traditions that nobody even recognises the venerated name anymore? Is nothing sacred? Has it really come to this?

Alas, it seems that it has. When I think about it, it is a long time now since I last heard the name. So here for the youngsters is a history lesson. The club has traditionally been known as the Tongue and Meats. How did this name come about? There seem to be two different stories. One says that it arose from confusion between the initials of our club and those of the Wellington Tongue and Meat Company, a local Wellington meat processing company back in the early days of the club. The other says it was a deliberate insult inflicted on us by members of the rival Wellington tramping clubs. Personally I think this is the more plausible version. But whichever the case, club members adopted the name with pride. Hordes of Tongue and Meats roamed the hills far and wide, feared by the rival clubs. There were the Tararuas, there were the Hutt Valleys, and there were the Tongue and Meats. And others envied the name; when they couldn’t rightfully claim it, they stole it. Apparently the Palmerston North Tramping and Mountaineering Club began calling themselves the Palmerston North Tongue and Meats. Perhaps they still do.

The name even served as the basis for themed trips. Who can forget Struan Little’s famous (or infamous?) Tongue and Meat Gourmet Trip? I can’t, and I wasn’t even on it! The only food allowed for all meals, breakfast, lunch, and dinner, was – you guessed it – tongue and meat! Keith Strode-Penny was apparently violently sick at the end of it! 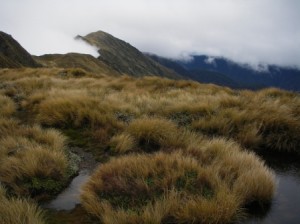 And now what has happened? After decades of proud use, has the name and all it stood for disappeared? Has the club gone vegetarian? Have stews and fry-ups been replaced by salads and meringues?  Have good old greasies on a Friday night been replaced by effete espresso slop-houses selling foreign muck ending in “o”? Has tongue and meat been replaced by sushi and quiche? Should we now be known as the Tarragon and Mints?

But I digress. After such a depressing and inauspicious start for an old codger, the trip itself was almost an after-thought. There were three of us, Amanda Wells, Richard Lardner, and myself, and we were heading for Dorset Ridge, via Baldy and around the tops. The weather forecast, as usual, was awful. (Many would say that that is essentially a tautology in the Tararuas.) We decided to head to Mid-King Bivvy instead. I was happy because I had never been there before. We would have made it around to Dorset but it would have been unpleasant and it might have been interesting trying to get back over the tops or crossing Dorset Creek the next day.

We arrived at the bivvy at 2.00 o’clock and settled in. It was a squeeze trying to fit three people and all our gear into the small space. I had the raised platform on one side and Amanda and Richard shared the remaining floor space. Looking around, I noticed that DOC had thoughtfully provided a large glow-in-the-dark FIRE EXIT sign enabling confused bivvy users to locate the door – it was good to see that our conservation tax dollars were being put to such good use. Fortunately the bivvy walls were too small for the vast array of other bold and dramatic DOC warning signs that seem to adorn all our huts these days. Danger this, danger that – it’s a wonder people aren’t too scared to set foot in the outdoors at all these days. (“Danger: Beware of Falling Meteorites if Venturing Outside.”) There was however the usual warning sign about the “water provided at this facility”. “This facility” – now would that be the bivvy? And the “water provided” – would that be the stream 20 metres away?

After whiling away the afternoon we came to the highlight of the day: dinner. Dinner that evening was…. pasta with olives and pesto! I looked on in stunned disbelief! I was aghast! Not only was it foreign, not only did it not contain any meat (or tongue), but it ended in “o”! I could sense whole generations of past Tongue and Meats turning in their graves. Paul Critchley would be throwing away his frying pan in dismay. Geoff Crockford would be throwing away his rifle and selling off his venison freezer. Kevin Thompson would probably elect to eat his leather shorts instead. But I faced it manfully, surreptitiously decanting the olives into the others’ bowls when they weren’t looking.*

Next morning the rain was bucketing down and the wind was howling in the trees – a fairly standard day in the Tararuas. It would have been pretty unpleasant up on the tops, so we decided to drop down the spur below the bivvy to Mitre Flats and head back to Holdsworth Lodge via the sidle track over to the Atiwhakatu.

Heading down the untracked spur gave me a chance to observe the tramping habits of the younger generation. These new-fangled GPSes are all very well, but what are the youth of today going to do if the batteries go flat? Whatever happened to good old map and compass? The skill of following a compass bearing? The instinct of following a spur? And this is not just idle speculation: somebody recently told me the story of a tramping party whose GPS went dead while tramping in the Tararuas not too long ago, so what did they do? Called up Search and Rescue and got choppered out, of course! I hope it isn’t true, but I suspect it probably is. All I can say is, I hope they got charged for the chopper flight. And that they weren’t from the Tongue and Meats.

And as for Camelbaks, don’t get me started! Whoever convinced the Youth Of  Today that they would instantly seize up in hideous convulsions and die an agonizing death from dehydration if they didn’t take a sip of water from their plastic bladders every 17.3 seconds must be laughing all the way to the bank! But our supermarkets are full of bottled tap water, so obviously you can fool most of the people most of the time if only you put you mind to it. (I wish I had thought of it – I could be retired in luxury rather than living in penury.) Carrying water in the Tararuas makes carrying coals to Newcastle seem like sound and sober economic policy. Why would anybody do it? It’s beyond me. There are always rivers and streams around, and enough tarns on the tops. And anyway, in my experience if you want a drink in the Tararuas, nine times out of ten you can get one by the simple expedient of  holding your mug out in front of you in out-stretched arm for 10 or 15 seconds, mouth-end up.

We reached the bottom of the spur without having wasted too much time with the GPS, made our way down beside South Mitre Stream, which was up and raging, and picked up the bottom of the sidle track. Now it was just a matter of plodding on, putting one foot in front of the other. You couldn’t possibly go wrong, not even with a GPS. We stopped for a quick bite to eat on the saddle and another at Atiwhakatu hut, but time was short and we were soon on our way out down the track in clearing weather. We arrived back out at the carpark just after 3 o’clock; naturally, having come out of the hills, it was now sunny. It had been a good trip with the Tongue and Meats.

3 thoughts on “The name is Tongue and Meats! A geriatric old codger braves the Ranges of Everlasting Mud and Misery”