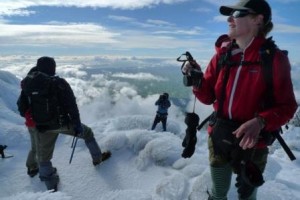 Platform 9 at the train station, the usual story, but this weekend was different. The world was predicted to end, and the weather was forecast to be clear on Mt Taranaki… It was as if the stars were aligned.

The plan, being to take the club vans to North Taranaki car park and a quick 75 minute tramp up to Tahurangi Lodge (Taranaki Alpine club). The journey out of Wellington was slow as it often is and we didn’t get to the car park until quarter past 11. The view of the mountain was clear, even without the aid of a bright moon the snow reflected what light there was and we could see the light on at Tahurangi Lodge some 500 meters above us. When we arrived at the lodge we were well ready to hit the sack. 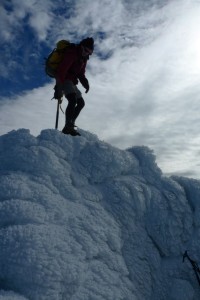 We got up rather late, people dragging themselves out of bed about 7:30 to 8 am with the intention of setting out for the summit around 9. The view from the lodge was superb – never before had I seen such a view of Taranaki, or more precisely never before had I seen Taranaki this close, every other time it was obscured by cloud.

We met some of the local Alpine club members; of particular note was “Dan of the hundred and one summits”, he had in the last year taken on the challenge of climbing the summit of Taranaki 100 times and made it and went up one more time for good measure. He had made the Lodge something of a second home for himself (and as members only pay $5 a night why not) and knew the area quite intricately.

So we left the lodge at 9, along with Dan, who decided to accompany us for the climb. Really I don’t have much in the way of words to describe this climb and you’re better off just looking at the pictures. Suffice to say that it was a fairly simple trudge up to the top, with crampons required due to the ice. We made the ascent a bit after 12, with only a French couple summiting via the same route. 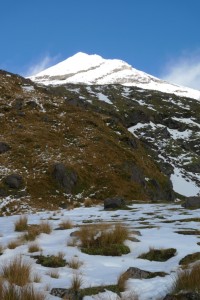 After a quick bite to eat and some photos we headed down to the lodge via the same route, with some small deviations, and were back at the lodge about 2:30, plenty of time for us to contemplate what we were going to do the next day and discuss the variables that make up a trip fitness grading over well-earned cups of tea.

We got up marginally earlier, with some intending to summit again if the condition where favourable and others keen to take a tiki tour back to the car park, but the weather had taken a turn for the worse, with forecast showers being heavier than desirable, so we took the easy option and headed straight back to the car park (and café) and re-joined civilisation.